At the end of 2010 MARBL received a splendid gift of rare books from Emory alum Stuart Rose. Among the treasures was Polychronicon by Ranulf Higden (2011 108) produced by the famous printer William Caxton. It is one of the first books printed in England, and one of the first books in the English language. The work was completed by Caxton in Westminster, England in 1482. 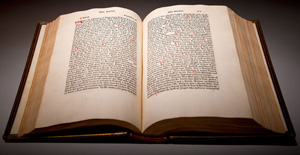 William Caxton (ca. 1422-ca. 1492) was the first English printer, and also acted as a translator and publisher. Caxton spent much of his career as a leading wool merchant, or mercer, in Bruges, what is today Belgium. From 1462 to 1470 he served as governor of the 'English Nation of Merchant Adventurers,' which allowed him to represent his fellow merchants, as well as act as a diplomat for the king. He then served in the household of Margaret, the duchess of Burgundy, sister of the English king, Edward IV. This led to him spending time in Cologne, Germany where he learned about printing and the book trade. On his return to Bruges in 1473 he established a press in association with Colard Mansion, an established printer in Bruges. He printed a number of works in Bruges including, in 1473/4, the Recuyell of the Histories of Troye which was the first book in the English language ever printed. Caxton himself translated the work from French to English. He returned to England in 1476 and established the country’s first printing press in the precincts of Westminster Abbey. Between 1476 till his death, probably in early 1492, Caxton printed 98 different works, most of which were in English, including the first printing of Chaucer’s Canterbury Tales. 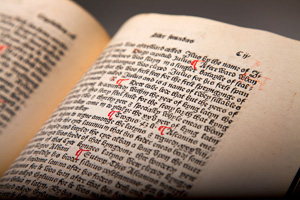 Polychronicon was written in the mid-14th century by an English chronicler and monk called Ranulf Higden (ca. 1280-1364). The work is a long chronicle of the history of humankind and was a popular work throughout the 15th century. Originally written in Latin it was translated into English by John of Trevisa in 1387, and it was this translation that Caxton printed for the first time in 1482.

MARBL’s copy of Polychronicon is a rare survivor, with the English Short Title Catalogue recording only 14 surviving substantial copies with 7 in the United States. This is also probably the only substantial printed book by Caxton in the southeastern United States. It also has an interesting provenance that can be traced through bookplates in the volume. It was owned by the banker and philanthropist Joseph William Drexel (1833-1888) who then passed it to his daughter, the socialite Lucy Wharton Drexel (1867-1944). The book then seems to have passed to U.S. Senator Boies Penrose (1860-1921). If you'd like to view the Caxton in person, feel free to come up and visit us in MARBL.