For those of us who have not studied the Civil War in great detail, it may be surprising to learn that not all slaves were in favor of abolishing slavery. A deeper understanding of the ways of life in the mid-nineteenth century, and what freedom would actually mean for slaves, is needed to see the larger picture of the many viewpoints which existed at that time. Our collections represent a wide range of perspectives in order to fully document history, even ones which aren't in line with today's viewpoints. One interesting pamphlet I came across in MARBL's collections is Harrison Berry's Slavery and Abolitionism, as Viewed by a Georgia Slave. In it, a literate and well-spoken man, who had been a slave his whole life, explains why he feels the abolitionist is the worst enemy of the slave. 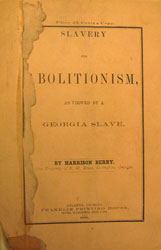 Slavery and Abolitionism,as Viewed by a Georgia Slave,by Harrison Berry, 1861

Harrison Berry, according to an introduction by H.C. Hornady, was born in 1816 as a slave in the property of Mr. David Berry. He was given to Berry's daughter at her marriage and became, then, the property of her husband, S.W. Price. From ten years old, Harrison Berry had worked in the law office of David Berry's son, and it was there that he learned to read and write. He went on to work as a farmer, then as a bootmaker. He continued to read and became very vocal about his assessment of slavery and abolitionism. The pamphlet expresses Harrison Berry's personal feelings towards the “fanatical Abolitionists, who call themselves Republicans. To them, and them alone, have I written.” (Berry, Preface)

One of the main points in Berry's 41 page booklet is his belief that slaves are better off remaining slaves and would not benefit from freedom in the way abolitionists think they would. His opinion is that a man is willing to care for something on which he has spent a considerable amount of money, and will assist in ensuring its health and safety, because of his investment in it. If slaves were freed, they would still be subordinate, but would no longer be under the protection of a master who was invested in their safety. This is further illuminated in a paragraph on page 27 below. Click on the image to read the quote. 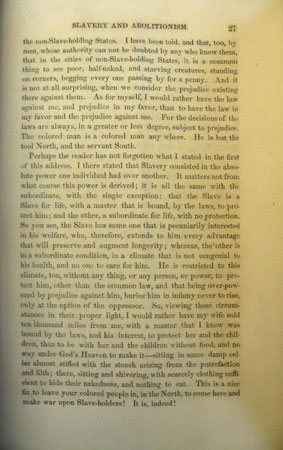 Quote from Slavery and Abolitionism, Harrison Berry,1861 (Click to Enlarge)

Harrison Berry goes on to make many points about why abolitionists are in the wrong including numerous pages regarding his belief that abolitionists should back off in the interest of keeping the peace and the Union together. An underlying theme of which is that when Northerners anger Southern slave owners, the slaves bear the brunt of their master's frustrations in the form of poor treatment. He also speaks at length about the abolitionist use of Higher Law as a reason to end slavery, and pulls stories and passages from the Bible to illuminate his statements.

Slavery and Abolitionism, as Viewed by a Georgia Slave is a powerful document in its ability to show modern researchers one slave's thought-process regarding freedom and the abolitionist movement of the North. What's interesting to note, too, is in some copies, there are numerous statements from men authenticating the validity of the authorship. MARBL's copy includes one by A.M. Eddleman. Harrison Berry felt very strongly about what abolitionists were doing to the country and to his protection, and engaged people in discussions with regard to these issues whenever possible. It's an interesting viewpoint, and perhaps one that isn't always included when discussing slavery and abolitionism, and what freedom would mean for those who had spent their entire lives as someone's property.

Come up and visit us in MARBL to view this pamphlet and the rest of our extensive Southern Historical Collections.