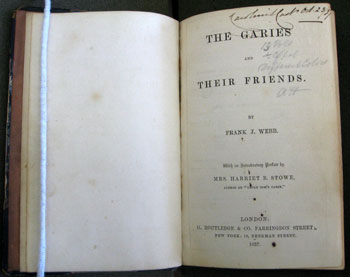 Title Page, The Garies and Their Friends,Frank J. Webb, 1857

Cedric Dover's copy of a rare first edition of Frank J. Webb's novel The Garies and their Friends is a prized volume in MARBL's collections. Dover, a self-identified “coloured Eurasian,” leftist, scholar, and crusader against racial prejudice had deep respect for African American literature. He doubtless would have wanted Webb's 1857 novel as part of his library because the book was only the second published by a black American. But Dover's notes on the book further suggest that he understood The Garies as a distinctive portrayal of interracial life and identity, and was especially interested in it for these reasons, too. For MARBL and its patrons, the book is valuable both for the rarity of the edition and for the glimpse Dover's annotations offer into his larger efforts to use literature to disrupt binary constructions of race and build global solidarity among peoples of color—an effort historians are only beginning to study.

The Dover Library, of which The Garies is a part, was donated to MARBL in 2008. It is the fruition of Cedric Dover's belief in “books as ambassadors.” During his lifetime, Dover made his “Negro library” available to scholars from across the mid-twentieth century Afro-Asian Diaspora in the hope that peoples of color would come to better understand and respect one another through literature to fight  mutual oppression. Dovers' book collection includes numerous rare and important works by African American writers—many of which Dover made extraordinary by the manner in which he annotated them. In the case of his copy of The Garies, Dover scribbled an entire page of questions and insights on a piece of loose-leaf paper found folded up and tucked inside the book. 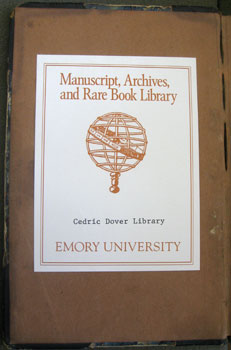 Bookplate of the Cedric Dover Libraryin The Garies and Their Friends,at the Manuscript, Archives and RareBook Library, Emory University

Dover's copy of The Garies was one of two thousand leather-bound first editions that G. Routledge and Co., the primary British promoter of American literature, published in 1857. The edition included two prefaces, one penned by Lord Brougham, and advocate of the British Slavery Abolition Act of 1833, and the other by the American author and abolitionist Harriet Beecher Stowe. The novel was dedicated to Lady Noel Byron, the estranged wife of the British poet Lord Byron and a well-known crusader for world abolition. The novel was thus published with a clear agenda to influence the abolition of American slavery from abroad. Indeed, Stowe's preface went so far as to introduce The Garies as an affirmative answer to the question “which the late agitation of the subject of slavery has raised,” –”Are the race at present held as slaves capable of freedom, self-government and progress?”

But in fact, The Garies actually deals very little with slavery and takes capabilities of African Americans as a matter of course. Webb's novel employs sentimental conventions to tell the story of two families, the Garies and the Ellises. Clarence Garie, a wealthy white Georgian planter and slave-owner, decides to move to Philadelphia with Emily, a mixed-race slave woman with whom he has fathered two children (with another on the way). The Garies hope to legally marry in the North and raise the children in a free state. In Philadelphia, they are befriended by the Ellises, an industrious and virtuous black family. As the novel unfolds, both the Ellises and the Garies become the targets of a race riot, which ends tragically. The Garies thus focuses on the free black community, its distinctiveness, and the perils facing it even in freedom. The novel also contains two subplots in which “passing” factors prominently, as well as meditations on class and the experience of being multiracial. From Dover's notations it seems that he, at least, found the questions raised by these more nuanced themes of The Garies as far more central to understanding the novel's true contributions than the inquiry Stowe had suggested. He was especially curious about Webb's racial heritage, perhaps wondering if Webb, like so many of his characters—and like Dover himself—came from an interracial background that made “white” and “black” understandings of race ridiculous. 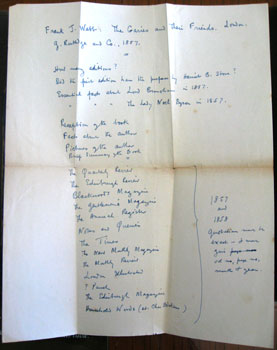 Annotations by Cedric Dover,included in The Garies and Their Friends

Dover's remaining notes about The Garies signal his interest in the novel's critical reception at the time of its publication. It may have been that Dover was interested in the critical reception of The Garies to determine if contemporaries had similarly recognized the book's deeper, messier contemplation of race that the rather superficial one Stowe suggested it posed. Whether Dover ever discovered the existing reviews of the novel is not known; if so, he was surely disappointed to find their authors had not moved beyond Stowe's framing inquiry.

In fact, it appears that Dover remained alone in his more complex reading of The Garies even throughout his own lifetime. The Garies continued to be misread and disparaged by critics—that is, when the book was remembered at all—for much of the twentieth century. But even today, The Garies is all-too-often left out of anthologies and college reading lists, its meditations on the “shifting alliances” of race, class, and caste ignored. Dover's early attraction to The Garies, likely inspired by these very qualities in the novel, thus appears to have been quite prescient.

Of course, exactly how Cedric Dover read and interpreted The Garies, or how he saw the novel contributing to the mission of his work and library, is not certain. But the book is an excellent example of the many volumes in the Dover library, now at home in MARBL, that demand further study and promise future insight into a fascinating man.