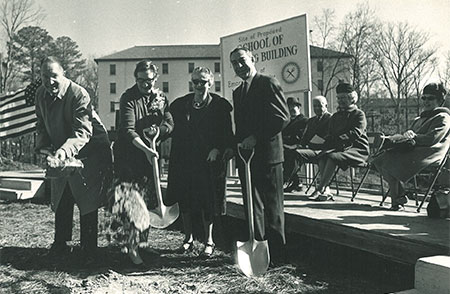 Emory President Sanford S. Atwood, right, helps commemorate the groundbreaking for the Nell Hodgson Woodruff School of Nursing building, the proceedings of which are recorded in Series 210

In the spring of 2012, the Emory University Archives began an audiovisual materials survey and re-processing project. After months of wrangling cassette tapes, VHS tapes, 16mm film, and more, the vast majority of archival audiovisual resources in the University Archives have been added to our finding aids in MARBL‘s EmoryFindingAids database. One new collection consisting exclusively of these audiovisual resources is a significant resource for documenting University history through sound and video: the Teaching Aids Department audiovisual materials (Series 210).

The Teaching Aids Department was responsible for purchasing and circulating film and audio resources for teaching and instruction, loaning recording and projector equipment, and creating reproductions and photographic slides. What really makes this collection important to Emory is that it contains recordings of campus events from the early 1940s through 1979. This group of recordings documents developments at Emory, changes in academia and higher education as a whole, and specific subjects like desegregation and civil rights, the Cold War, public health, and theology.

Below are just a sample of some of the kinds of subjects and events documented in this collection: 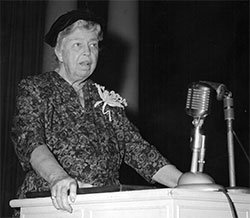 All of these materials can be requested for listening or viewing in the MARBL reading room, but you must contact MARBL a few weeks in advance to have them digitized. Don’t be shy, once they are digitized, they will remain available for the next researcher who wants to listen or watch!

(I would like to add a BIG hearty thanks to Ben Nobbs-Thiessen, PhD candidate in History, for trudging through these materials with me and helping make these resources available. Thanks, Ben!)