The exhibition, “And The Struggle Continues: The Southern Christian Leadership Conference’s Fight For Social Change,” which was curated by Carol Anderson, Michael Ra-Shon Hall and Sarah Quigley, is on display now through December 1 in the Schatten Gallery which is located on Level 3 of the Robert W. Woodruff Library. Below is the curator’s statement included in the exhibition.

AND THE STRUGGLE CONTINUES highlights the efforts of one of the most important human rights organizations to challenge the oppressive political and economic systems of the 20th century.

Based on the extensive Southern Christian Leadership Conference (SCLC) records housed in Emory University’s Manuscript, Archives, and Rare Book Library, the exhibition reveals how SCLC exposed and transformed a status quo that allowed millions to suffer from poverty, environmental degradation, health care disasters, hunger, homelessness, disfranchisement, and a brutal criminal justice system. It waged these battles on a political terrain that had been fundamentally altered since the organization was created in 1957.

The exhibition picks up the story of SCLC eleven years after it was founded to “redeem the soul of America.” By 1968 Congress had finally passed landmark legislation on civil rights, voting, and housing. The visible markers of “white only” and “colored” were coming down. But the reality of poverty, inadequate schools, a Jim Crow justice system, and discrimination in housing and employment continued to dominate the lives of millions. With the assassination of its iconic leader, Martin Luther King, Jr., the question soon became how SCLC could mount an even more complex campaign for justice and equality, especially with the Nobel Peace Prize winner no longer at the helm. 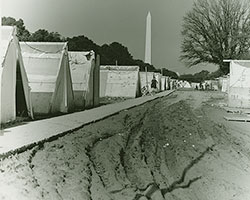 The decision to take on the larger human rights agenda of jobs, housing, and health care — while shoring up the still-precarious civil rights victories of the 1950s and ’60s — is the essence of this exhibition. During the movement, SCLC’s nonviolent tactics had required the discipline of the protesters — often ministers, teachers, students, and other well-dressed icons of respectability — and a readily identifiable enemy — racist sheriffs unleashing German shepherds or bullwhips on unarmed citizens. Yet by the late 1960s, both of those pillars had crumbled. Overt racism had been discredited; still, the forces that maintained inequality were as powerful as Jim Crow but more elusive and harder to define and identify. In addition, those who felt the brunt of continued inequality did so without the shield of respectability to garner public sympathy and outrage. Poor, incarcerated, or afflicted with HIV/AIDS, they found themselves instead consigned to the “unworthy.” 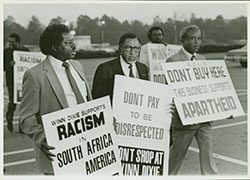 Another factor that hampered SCLC’s ongoing quest for equality was a nation intent on “moving on.” Unequal schools, impoverished neighborhoods, and scarce job opportunities were now no longer considered to be the result of years of discrimination and public policy but the culmination of a “culture of poverty” and an individual’s bad decisions. In the process, the United States’ responsibility for nearly 400 years of slavery and Jim Crow faded from the public consciousness. In addition, as apartheid in South Africa demonstrated, the pursuit of international human rights required organizational nimbleness to deal with the complications inherent in global economics and politics.

SCLC’s answer, as AND THE STRUGGLE CONTINUES suggests, was not to shy away, collapse, or rest on its laurels. Instead, it faced these challenges with an unshakable belief in the power of God and the church — and the courage to be on the right side of justice.