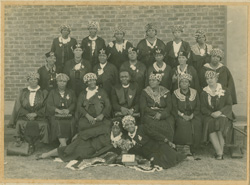 Few people live past 100. Fewer still fill those years with untiring enthusiasm for service and scholarship. In more ways than one, Josephus Roosevelt Coan was exceptional. Born to a farming family in Spartanburg, SC, he went on to graduate from Howard and Yale.

After serving as a missionary in Africa, Coan eventually settled in Atlanta where he worked as a professor. The Manuscript, Archives, and Rare Book Library is pleased to announce the opening of the Josephus Coan papers, one of the most complete African Methodist Episcopal (AME) collections in MARBL’s holdings.  A small exhibition of selected items from the collection is currently on display in MARBL. 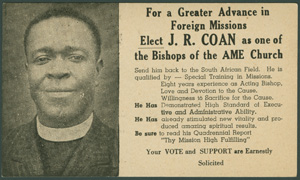 A lifelong worker in the African Methodist Episcopal Church, Coan served as a missionary in South Africa during World War II. His papers show his involvement in AME missions and education and social organizations in South Africa. Among the items in the collection are Coan’s Bantu Men’s Social Centre membership card; the same group included Nelson Mandela among its members. The Coan collection also includes many photographs from his time in Africa.  As an African-American missionary in apartheid South Africa, his experiences and papers offer unique insights into race relations at home and abroad. 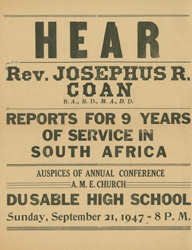 On returning to Atlanta from Africa, Coan was a professor at Morris Brown College, Turner Seminary, and the Interdenominational Theological Center. His syllabi, assignments, and lectures show his interest in missions, religious education, and the black religious experience. These documents are a window into religious education at historically black colleges and universities during the Civil Rights era. Coan’s lectures and essays further illuminate perspectives on the black church during changing times.  Coan’s research and writings on church bishops, as well as materials from his own campaign for bishop, show the role of the foundational members of the church in the twentieth century.