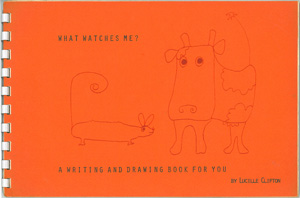 What Watches Me? A Writing and Drawing Book For Youby Lucille Clifton (1968)

What “early in the morning/it shines its glassy eye”?

What “sees me wander/ in and out/ and never stops to cry”?

These riddles and more can be found in Lucille Clifton‘s first children’s book, What Watches Me? A Writing and Drawing Book for You (1968). The cardboard, spiral bound book invites young readers not only to respond to Clifton’s riddles, but also to draw their answers on the provided blank pages. 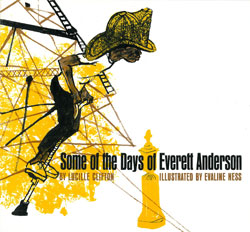 Some of the Days of Everett Andersonby Lucille Clifton (1987) 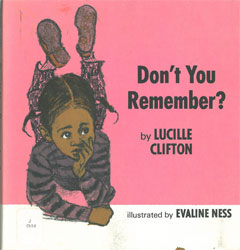 A picture book also written by Clifton, Don’t You Remember? (1973), gave its name and cover illustration to the 2008 exhibition of children’s books by poets created by Kevin Young, the curator of Literary Collections and the Raymond Danowski Poetry Library. What Watches Me? is also slated to become part of an exhibition later this year. The book will be featured in “Come Celebrate With Me: The Work of Lucille Clifton,” opening in later this year in MARBL’s lobby on the tenth floor of the Woodruff Library. “Come Celebrate With Me” is timed to coincide with the Decatur Book Festival where Young will debut his edited Collected Poems of Lucille Clifton. This exhibition will include drafts of poems found in the Collected volume as well as broadsides, correspondence, book proofs, and other assorted material from Lucille Clifton’s personal library and her manuscript collection.