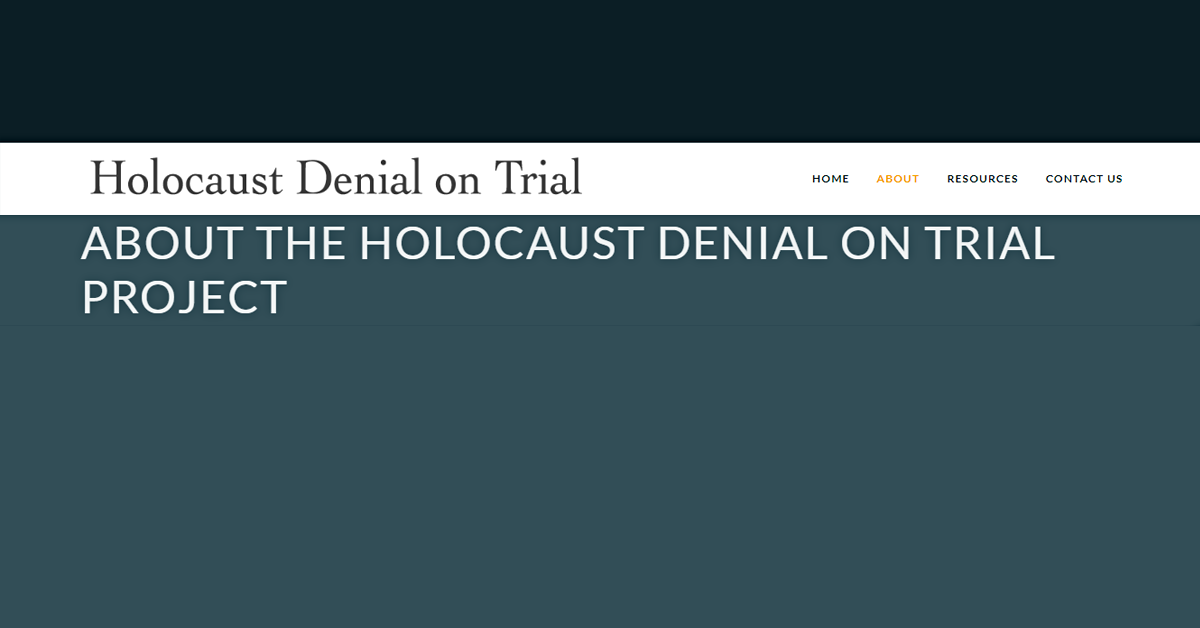 The basic task description sounded tedious: skim through hundreds of pages of trial transcripts, making note of page and line numbers where there were shifts in topic or speaker. Little did I anticipate the education I would receive on the Holocaust, Nazis, law in the UK, and the subtleties of British sarcasm, all while working on the new website for Holocaust Denial on Trial (HDOT).

One of the main purposes of HDOT is to provide “perpetual access” to the trial materials of David Irving v. Penguin Books U.K. and Deborah Lipstadt. This was a landmark libel trial that ended up examining (and amply demonstrating) both the facts of the Holocaust and the attempts to distort and deny those facts by a small but virulent group of individuals, including David Irving (see here for more background). At the end of this lengthy case, tried in London in 2000, Judge Charles Gray ruled against Irving’s libel claim. He judged that Irving had indeed “deliberately misrepresented and manipulated historical evidence.”

While Judge Gray’s judgment was clear and coherent, the thirty-two trial days preceding this decision were just the opposite. In addition to Judge Gray, Irving, and Richard Rampton (representing the defendants), the cast of characters included numerous expert witnesses, not to mention reams of documentary evidence and reports gathered in the years leading up to the trial. The expected topics, such as the details of the Nazi concentration camps, are discussed over and over, but one also encounters such oddities as Irving’s negative views on black English cricketers and his tracing of his family back to Robert the Bruce—all within a few lines of the same transcript (Day 15)! And while there are many exciting moments of legal drama, one may just as easily find several pages discussing where to file one particular document or whether the courtroom is adequate.

Such a complicated case raises the question of what constitutes “access.” While the transcripts and other documents could simply have been scanned as images and then dumped on a simple website, this was not the kind of access the creators of HDOT envisioned. How do you take such a massive amount of textual data and make it usable?

At an earlier stage of HDOT, the scanned images were converted to text files. But even then, anyone interested in the case would have to sift through thousands of pages to find anything useful. Thus for the current stage of the project, a team of graduate students at the Emory Center for Digital Scholarship, led by Karen McCarthy, set about reading through the trial transcripts to create a digital table of contents and internal navigation for each day of the trial. This allows one to easily locate relevant passages and see the overall activity of each trial day at a glance. Now all the trial materials, including witness statements, daily transcripts, and the judgment and appeal, are available on the website in an easily readable and searchable format. In addition, all the trial materials are available for download as text encoded files for more advanced analysis. This project thus illustrates the interaction of digital tools and human meaning-making that lies at the heart of digital scholarship.

While the new film, Denial (dir. Mick Jackson, 2016), gives a gripping glimpse of this fascinating case, those who really want to dig into the issues at stake can now explore the entire trial as it played out, line by line. And as one who has been through much of the material, I can say that it is worth reading.