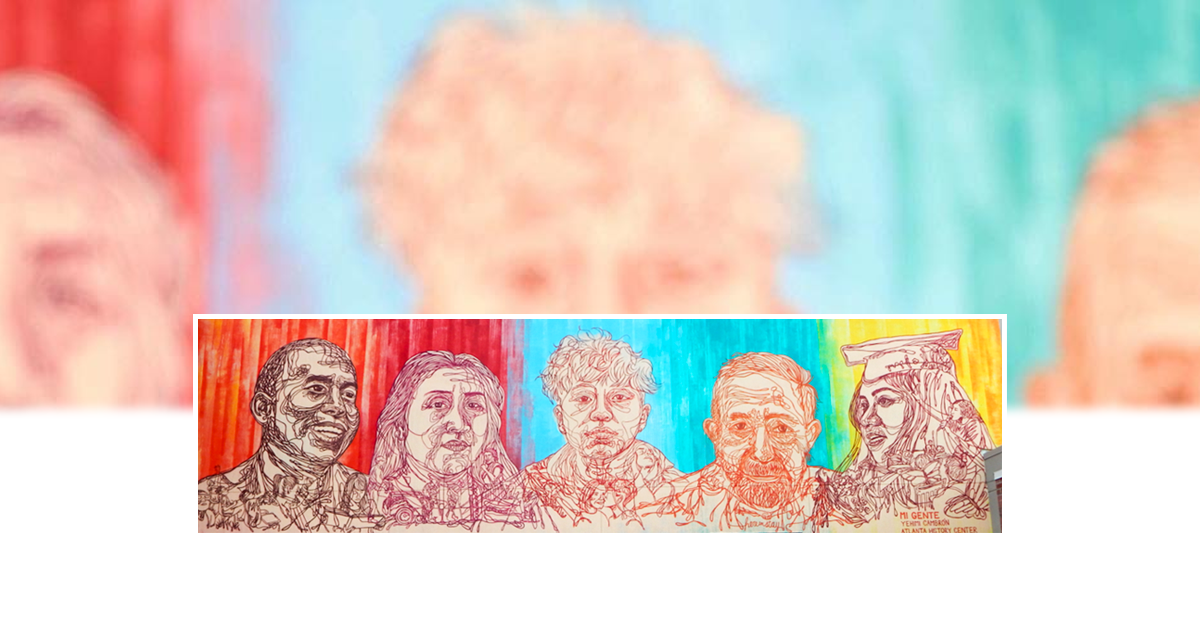 The Atlanta History Center (AHC) recently celebrated the launch of a new mural at the “Mi Gente Drive-Up Mural Launch” event on Saturday, June 27, 2020. Mi Gente (“My People”) depicts the stories of everyday individuals that make up the Latinx community of Atlanta. The mural was designed and executed by Yehimi Cambrón (an artist, activist, and public speaker) and is a project of the Neighborhood Initiative at AHC, produced in partnership with Freedom University, the Latino Community Fund, the Latin American Association, NCG Cinemas, Northeast Plaza, and Plaza Fiesta. A guided experience tour—created using the Emory Center for Digital Scholarship (ECDS) mobile and desktop-based platform, OpenTour Builder—also launched at the event. The tour (available in both English and Spanish) provides info about each portrait subject and helps tell the stories behind the mural, which is located at: Northeast Plaza / NCG Cinemas, 3307 Buford Hwy NE, Atlanta, GA 30329.

The Mi Gente OpenTour page explains that in 2019, the Atlanta History Center and its aforementioned partners commissioned a mural to represent the diverse Latinx communities in the Atlanta area, made possible by a generous donation from the Thalia & Michael C. Carlos Foundation.  Yehimi Cambrón’s mural, located in Buford Highway’s international corridor, depicts the “varied stories of ‘everyday individuals that make up Atlanta’s Latinx community—from well-known leaders to those whose efforts are little-known. Through the thematic areas of education, labor, gender, political advocacy, and the current activism of Dreamers, Mi Gente invites visitors to view five large portraits and the foundational vignettes that support them.”

The guided tour includes close-ups of each portrait accompanied by information and quotations. The first theme—Education—is represented by Cambrón’s portrait of Jason Esteves. The foundation (bottom portion) of the portrait features Latinx students in classrooms. Esteves, a Puerto-Rican / Afro-Latino Atlantan who serves as Chair of the Atlanta Board of Education, says the following about the mural:

The mural represents a Latino community that is diverse and vibrant. We are growing in numbers and in impact. And more importantly, the best is yet to come.

The third theme—Gender and Identity—features portrait subject Danny Cabrera. As the guided tour explains, this portrait “explores the different gender expressions within the Latinx community in Atlanta. Highlighted in this portrait’s foundation (lower portion) are Estrella Sánchez, a Mexican, trans-woman activist within the community. There are also selected vignettes challenging gender norms within the community.” The quotation from Sánchez includes includes her wish for society to know that the Latinx community is socially, politically, culturally, and religiously diverse.

The “Political Advocacy” portrait features Teodoro Maus, who was Mexican Consul General in Georgia from 1995-2001 and a pivotal figure in recent migrations and activism. The tour information includes that, in 2001, “along with Adelina Nicholls, he founded the Georgia Latino Alliance of Human Rights (GLAHR) which has a mission to educate, organize and train the Latino community in Georgia to defend and promote their civil and human rights.”

See how far we all fall when we act with fear and abhorrence of someone different than us. —Teodoro Maus

The final theme—Dreamers—focuses on the “current activism of undocumented youth seeking equal access to higher education.” The portrait of Arizbeth Sanchez, a graduate of Freedom University who currently serves as its Community Engagement Coordinator, also features scenes of classroom teaching and protests staged by Freedom University. The pictured protest in the bottom portion specifically depicts “the ongoing fight for DACA (Deferred Action for Childhood Arrivals) immigrant youth to access higher education in Georgia universities.” Below is an excerpted quotation from the portrait subject herself:

[…] Atlanta was once the epicenter of the Civil Rights Movement in the 1960s. We must learn from our Black brothers and sisters how they have fought for their freedom for they have left valuable lessons in search of justice throughout history as well as today in day. The age-old tactic of divide and conquer has been used to drive our communities apart, but we must wake up and realize that we are not each other’s enemy. Our common enemy is the deep rooted grasp to white supremacy our home has held on to. We must organize and work together to create a better world for generations to come. If we are all not free, none of us are free. —Arizbeth Sanchez

The event page on Atlanta History Center’s website includes an artist statement from Yehimi Cambrón, who says: “The public will likely recognize the portraits of some of our better-known leaders among the five large portraits of this mural. But I intentionally included the portraits of activists like Arizbeth Sanchez as well ‘every-day’ folks like a former student and the mother of another former student from Cross Keys High School—because their roles in our community are just as essential as the roles of the leaders the public might recognize.” With this mural, Cambrón honors Latinx history and sends a message of acceptance and inclusivity.

Other recent tours created with the ECDS platform OpenTour Builder include: Atlanta’s Golden Blocks (in partnership with the Lucy Craft Laney Museum of Black History and the Greater Augusta Arts Council) through the Digital Tour Initiative (Georgia Humanities and ECDS); and a Campus Public Art tour of Emory University.