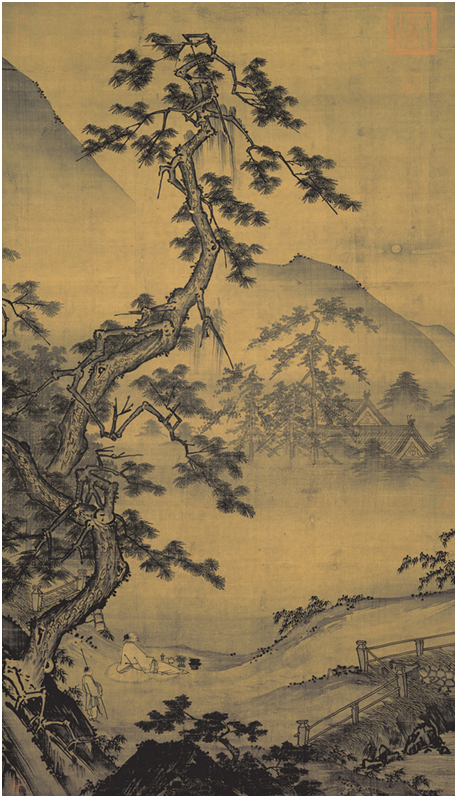 This painting by Ma Yuan is very peaceful. On the left side of the painting there is a very big pine tree. The front and the back have even more trees. Behind the pine trees, there are a couple of relatively tall mountains. Furthermore, you can see that behind the trees there are some traditional style houses. In the lower left corner, there are two men, one who is sitting on the floor, while the other stands behind the other man. They are both looking at the moon.

Ma Yuan was born in the year 1160. His hometown was Hangzhou. He came from a family of well-known painters. Ma Yuan was a very influential painter; other Chinese traditional painters imitated his style. Ma Yuan’s son also became an artist. I chose this painting because once I saw this painting, I thought it was very pretty and had a very calm feeling.

In addition to a calm feeling, I also thought this painting had a profound meaning. This painting emphasizes nature, because the trees, mountain, and fog that Ma Yuan drew engulfed the two men by a large degree. Furthermore, those two men weren’t in the middle, they were only in the bottom left corner. They look very relaxed, peacefully watching the moon. If I were in the painting, I would want to also watch the moon together with them and enjoy Mother Nature. In our lives, we are often extremely busy that we don’t have time to be relaxed nor have the time to appreciate Mother Nature. 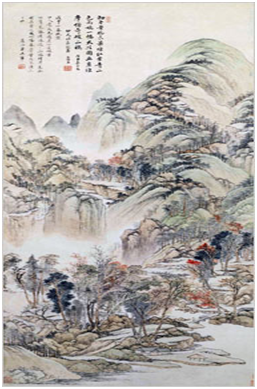 This landscape panting is drawn by Wang hui. In the painting, there are three mountains, river, different kinds of trees and many rocks. Many trees are green, but some are red. There is an animal by the river, drinking water. Some mountains are very tall but some are not too tall. By looking at it, the weather is very nice, not hot or cold.

In 1632 during Ming Dynasty, Wang hui was born in Jiangsu. His family has many painters. His father and grandfather were both painters. Wang shi min and Wang jian taught him landscape painting. These two painters are very famous. Wang hui started painting at just age seven. I chose this painting because Wang hui is very famous and the painting is very colorful. 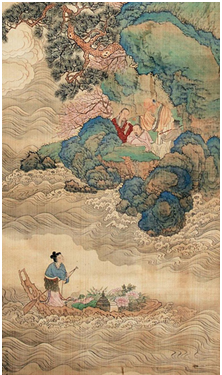 This is Qiu Ying’s painting, called Qiu Ying- People. This is a very beautiful painting and has a large mountain. In order to draw the mountain, in addition to    using green, Qiu Ying used blue and brown. Moreover, this painting has wavy water, a tree, and three people. One of the three people is riding a boat, and two people   are on the mountain. Qiu Ting uses a variety of colors to depict the landscape. It seems that three men are talking

In 1494, Qiu Ying was born in Taicang City of Jiangsu Province. He learned the art of painting from famous painter, Shen Zhou. Unlike other painters who use  brown and green, Qiu Ying uses blue and red. Also, his brush technique, called    Gongbi, became well known. He became one of the Ming Dynasty’s famous painters. I chose this painting because it is painted with various colors and is beautiful. 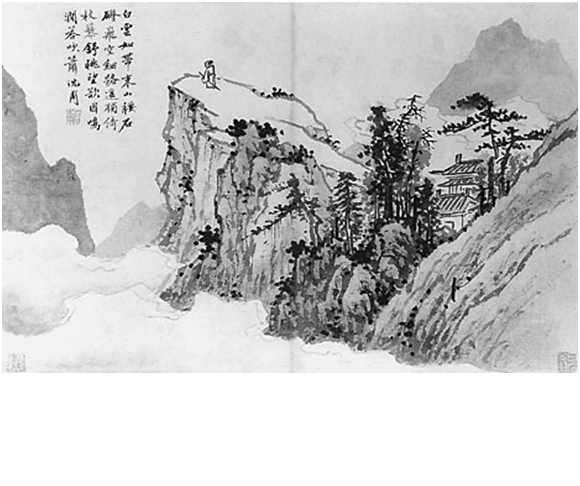 At first glance, this painting seems simple, but if you look carefully, you can see it is quite complex.  The painting has rugged mountains that seem to be tall because their bottoms are shrouded by mist and cloud.  On one mountaintop is a home surrounded by trees.  To the left of the trees and house is a plateau on which a man sits thoughtfully.

Zhou Chen painted this painting.  He lived during China’s Ming Dynasty in Jiangsu Province in the east of China.  Zhou Chen really liked to paint mountains, rivers and other landscapes as well as people.  When he was old he taught painting and had many famous students such as Tang Yin and Qiu Ying.  I chose this painting because of its perspective on life.  In the painting the scenery is very large while the person is very small.  I think this is correct, but today, many people treat the natural landscape badly and it seems like they think they are bigger than the world.  I find looking at this kind of painting very refreshing.

This painting gives me a very good impression and reminds me of Big Sur on California’s coast.  I like Big Sur so much because it has tall mountains whose base is shrouded in mist and clouds and tops are covered in trees.  It looks a lot like this painting.  If I were to be inside the painting, I would climb the mountains to the house.  After I arrived at the house I could rest—reading books, painting, sleeping, looking at the beautiful scenery, etc.  I could also talk to the man and find out his reflections.  I think living in this painting would be very relaxing.

Guo Xi’s landscape painting, Early Spring, is a Song dynasty painting. Much like other Chinese landscape paintings, this one is also drawn on silk with black ink. Early Spring is a piece completed in year 1072. This painting is currently kept at Taipei’s National Palace Museum. In the painting, it has a waterfall, trees, cloud and temple at the mountaintop. Upper right corner has a poem written by an Emperor.

Guo Xi was born in Hunan Province. He is the most famous Northern Song dynasty’s landscape painter. He thought all four seasons have different clouds and vapors, so he drew different landscapes for each season. He also drew summer, fall, and winter mountain. His paintings and brush strokes had a great influence on later painters.

When I was choosing a landscape painting, I saw many painting one after another. I felt like the purpose of the early stage paintings was not to exactly reproduce the nature’s appearance, but to express the emotion and atmosphere that the nature gives us. I particularly liked this painting because I was amazed by the detailed drawing of the mountain. It expresses the just-awaken spring very well. If I were Guo Xi, I would add some living creatures to add more energy to the painting. I want to draw some birds with other colors. 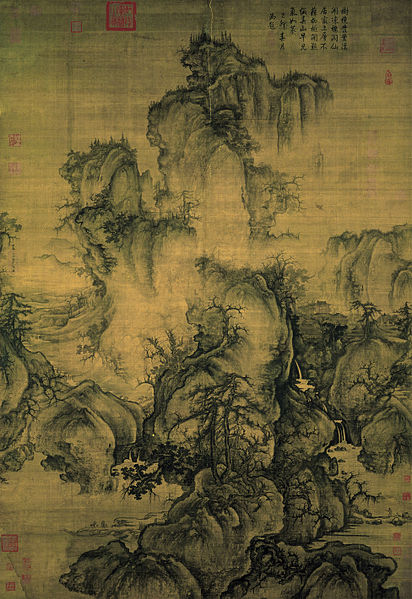