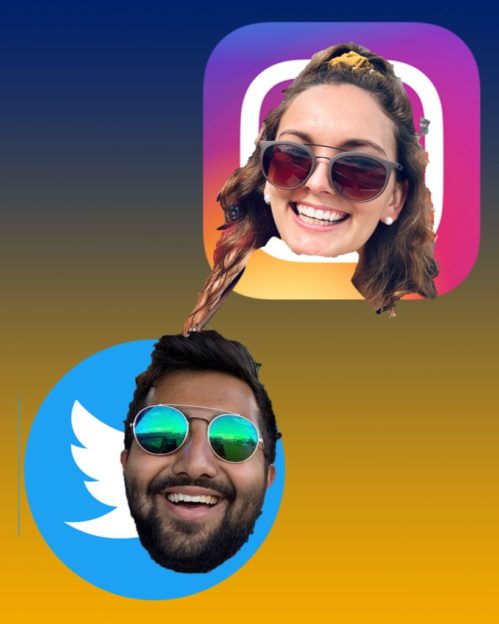 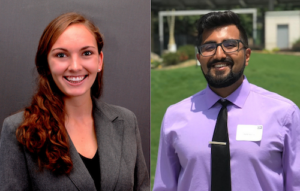 This week, we sat down with the new team to learn about their interest in epidemiology, social media, and much more!

What makes you interested in social media and how does epidemiology fit into that interest?

Tell us about your research interests and career goals.

What do you like to do outside of epidemiology? 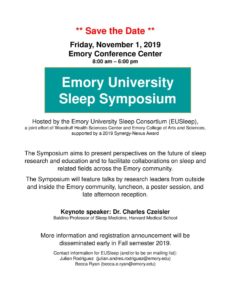 Under limited supervision, the epidemiologist would have knowledge of advanced statistical methods to analyze, develop, implement, and promote new and creative strategies and solutions to address public health issues and challenges in a clinical research environment. Designs, manages, and evaluates large, state-level (group-randomized) controlled trial. Thoroughly understands and executes study protocols and procedures to ensure accurate and consistent collection of data. Provides technical expertise and advice on study design and data analysis using a variety of statistical methods. May provide assistance with interpretation of statistical analysis for peer review. Contributes to grant proposals, protocols, data analysis plans and management, reports, manuscripts, and presentation of study findings. May participate in peer-reviewed manuscript authorship and occasional travel to scientific conferences. Supervises research trainees by orienting, and training. Performs related responsibilities as required.

MINIMUM QUALIFICATIONS: A master’s degree in public health (epidemiology) or related research intensive field from an accredited school. At least one year of related experience, which could be classified as fellowships, research assistantships, or part-time research activities, is preferred.

PREFERRED QUALIFICATIONS:Knowledge of advanced statistical methods to analyze, develop and implement strategies to address chronic health issues and quality of life related to the public health issue of the population with Congenital Heart Diseases (CHD).

Ability to design, apply inclusion/exclusion criteria and analyze case-control studies under limited supervision. Needs to be able to choose appropriate study design and analysis methodology and to have excellent oral and written communication skills to communicate findings from these studies with appropriate terms. Two years of related experience.

If your dream job comes available, you want the recruiters to consider you. For that, they need to know you. Networking is key for career opportunities. In the past, there only was the old boys network, these days there are alternatives. LinkedIn is a good place to post your profile and connect, but you might also want to consider Twitter.

My interest in Twitter didn’t happen overnight. I signed up as part of a public scholarship program but was a ‘listener’ for several years. I followed colleagues in epidemiology, public health, and genetics. I retweeted what I found worth sharing and only responded to tweets that were comfortably within my expertise.

It was worth it though. There are many epidemiologists and statisticians on Twitter. They share their knowledge and thoughts, post what keeps them busy, what catches their attention, what worries them, and what they find important, value, and like. Twitter is also a place where many new studies and developments are discussed. Needless to say, I learned a lot.

Over time, I connected with many people who have similar interests but who I would never have met in person because we attend different conferences. Physicians, statisticians, policy experts, patient advocates, and journalists. Slowly but steadily, I expanded my network across disciplines. Twitter is now my favorite ‘annual’ conference, every day.

My engagement on Twitter took a turn in 2018, when I was asked to comment on a new paper in my field. I posted a thread of tweets that led to a lot of discussion and to a steady increase in followers that still goes on today. The thread caught the interest of an editor, which is how it got published as a commentary. My co-author and I know each other from Twitter, we’ve never met in person.

Writing that commentary was also the first time that I asked experts on Twitter to check whether we had correctly described a new and complex statistical method. I have since solicited peer review several times for entire manuscripts and paragraphs.

My most ‘viral’ contribution is another thread of tweets in which I explain—would you believe—the area under the receiver operating characteristic curve, a statistical metric that many people use but few really understand. That ‘tweetorial’ is now also a manuscript under revision.

If you use Twitter wisely by following people you find worth following and by posting more sense than nonsense (use other social media for the fun stuff), then you too can learn, ask, share, and entertain, all while expanding your network. Give it a try.

How do YOU use twitter? Who are your favorite epidemiology/public health influencers? Tell us in the comments!

Join the Epidemiology Department for Bagel Breakfast Wednesday, September 4 from 8am to 10am! 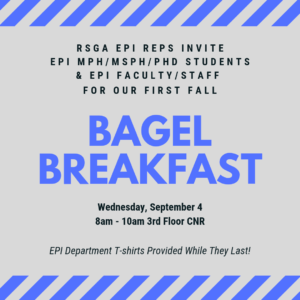 The Epidemiology Tutor provides analytic advice and assistance during the academic year for a broad range of class assignments involving quantitative analysis, as well as theses. The Tutor works one-on-one with RSPH students on every aspect of the data analysis and interpretation process including:

· Translating a research question into a testable, quantitative hypothesis

· Description of study and analytic methods

· Interpretation of results for epidemiologic purposes

For thesis support, the Epidemiologic Tutor will provide advice to students and their thesis advisors regarding analytic plans and analysis interpretation, but the actual analysis will remain the responsibility of the student.

The Epidemiologic Tutor works with RSPH students in a pleasant, constructive and encouraging manner. The Tutor must be dependable and punctual in his/her duties and notify the appropriate staff personnel in a timely manner when conflicts or problems occur.

· A positive attitude towards students, faculty and staff.

· Committed to reflection and growth in professional practice.

To apply: Submit resume and an analytic writing sample interpreting the results of an epidemiologic analysis (e.g., from a class or research project) on Handshake: https://app.joinhandshake.com/jobs/3044758

Job Overview:
The Tennessee Department of Health’s Division of Family Health and Wellness is hiring an Epidemiologist 2 for the Early Childhood section in Nashville, TN. This position will be responsible for professional scientific and epidemiological assessments of considerable difficulty for multiple programs.

Who we are and how we impact Tennessee:
TDH incorporates our values into the work we do each day to achieve our mission, live our vision, and address the four leading causes of death in Tennessee.

Mission:
Protect, promote and improve the health and prosperity of people in Tennessee.

Vision:
A recognized and trusted leader, partnering and engaging to accelerate Tennessee to one of the nation’s healthiest states.

To apply:
Interested candidates should send their resume to Dr. Kimberly Lamar at Kimberly [dot] Lamar [at] tn [dot] gov.

(1.) High School Diploma or GED and five years of clinical research experience. OR

(2.) Two years of college in a scientific, health related, or business administration program and three years clinical research experience OR

(3.) Licensed as a practical nurse (LPN) and two years clinical research experience OR

(4.) Bachelor’s degree in a scientific, health related, or business administration related program and one year of clinical research experience OR

This position is intended to support clinical research and all clinical training requirements must be tracked and monitored through Emory Healthcare under the credentialing category of CLINICAL RESEARCHER.

Welcome to the Fall 2019 semester!!! Over the summer there has been several new IT related initiatives that have been implemented to enhance your academic experience here are the Rollins School of Public Health.

During these sessions, we can provide support for accessing email accounts, wireless printing, access to Citrix or Apporto, mapping network drives, and any other general IT support questions.

Please RSVP on canvas ASAP (by Tuesday @12pm) for the Epidemiology Department Chair’s Chat, on September 4 from 12-1pm! Pizza will be served. 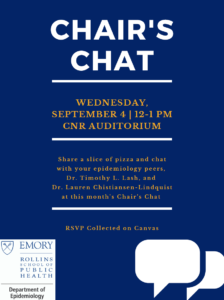