The last time I went to Korea, I was around seven years old, and everyone around me thought I was some sort of child genius. I say this with a grain of salt – they likely didn’t think I was a genius, per se, but they definitely thought I had some level of precocity.

The root of this belief was the fact that I spoke fluent English. In Korea, English is taught in schools to older students, so seeing a seven-year-old with perfect pronunciation and grammar and fluency was something of a spectacle. 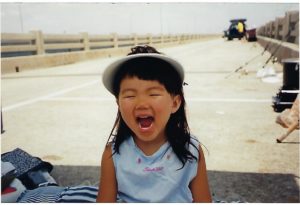 Me, as a screaming child in Korea

Of course, what they didn’t know was that I spoke English because I didn’t know much Korean.

Being in Korea shoved me out of my comfort zone – only my older sister spoke English fluently, but I couldn’t just talk to only her for the entire duration of my visit. My mom knew some English from living in America for so long, but not even she could accurately translate everything I said. Thus, I was given no choice but to learn Korean. I knew enough basics to hold a brief conversation but not enough to really interact with my cousins, aunts, and uncle. At that time, I saw learning Korean as a survival mechanism – to be able to get around the foreign area, I needed to learn to read the street signs and ask strangers in their language for help.

Whenever I think of that summer, I liken the experience to what I imagine study abroad to be like. I am essentially displaced into a foreign country, with little to no knowledge of the language and culture of the region. This prospect makes me, as someone who is extremely introverted and socially anxious, uncomfortable. But I firmly believe this to be a necessary discomfort. I need to learn to step out of familiar territory and be able to dive into uncharted waters in order to grow.

I started these steps in high school, when I forced myself out of my box at a Spanish immersion camp. It was taxing – both physically and mentally – for me to struggle with communication because I didn’t know enough Spanish to thoroughly express myself. In the end, though, I could tangibly experience how my communication skills were improving because I could nonchalantly make a joke or easily follow and participate in a conversation that wasn’t about my hobbies or favorite food. I also returned home with a deepened appreciation of the culture because I experienced the closest thing to what culture immersion during a study abroad would be like while I was at camp. 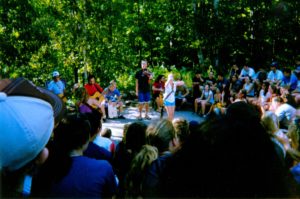 Another important aspect of study abroad is that you will never be able to experience anything more authentic or raw or in its truest form unless you live and experience the country for yourself. At camp, my breath was taken away by the beautiful traditional dances or the delicious foods from each Spanish-speaking country (meals were themed by country) or the fun events of popular holidays. But I know that that experience wouldn’t even begin to compare with what study abroad would be like. After all, despite a professor’s best efforts, everything taught in class is still just 2D, or text on a page, or a video shown on a screen.