The Lucille Clifton Exhibition Come Celebrate With Me: The Work of Lucille Clifton is currently on display in the MARBL gallery on the 10th Floor of the Robert W. Woodruff Library. The exhibit is co-curated by Kevin Young, Curator of Literary Collections and the Raymond Danowski Poetry Library at MARBL, and Amy Hildreth Chen, Emory PhD student in English.

A second exhibit which focuses on Clifton’s work as a children’s book author, She Sang So Sweet: Lucille Clifton’s Children’s Literature, and curated by Amy Hildreth Chen, will be available on the 2nd Floor of the Woodruff Library in mid-September. The following is the essay which accompanies the exhibition, written by Kevin Young.

National Book Award winner, Fellow of the Academy of Arts and Sciences, Emmy Award-winner, Chancellor of the Academy of American Poets, children’s books author, mother, memoirist, Jeopardy champion, survivor, poet, and national treasure, Lucille Clifton was at the height of her poetic powers when she died in February 2010.

Born Lucille Sayles in 1936, just outside Buffalo in Depew, New York, Sayles would meet her future husband through Ishmael Reed. Reed, Sayles, and Fred Clifton performed in the Buffalo Community Theater Workshop. Later, Clifton herself would attend the historically black Howard University.  Howard in the 1950s was a very fruitful time for African American letters; her cohort included fellow writers Toni Morrison, later to be her editor at Random House, as well as teachers like Sterling Brown. Clifton’s mature work began in earnest later, in the early sixties, yet even before her first book, we can see her distinctive voice in poems whose line and music suggest her future development. 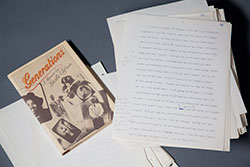 After the appearance of her first full-length book of poetry, Good Times, in 1969, Clifton wrote steadily and assuredly, publishing poetry, children’s books, and even prose. In tracing the roots and telling the tales of a black family, her groundbreaking memoir Generations (1976) could be said to forecast the rise in the attention paid to black genealogy. But Clifton’s poetry also critiques family and country, mourns and makes known what one book of hers calls “the terrible stories.” She’s as interested in soul as body, her poetry paying “homage to my hips” and providing “wishes for sons”; biblical in her lines as Whitman, she invites an American “I,” this time lowercase.

To mention Clifton’s winning Jeopardy is not to say that Clifton is interested in trivia, but rather, in knowledge. Like Pablo Neruda, she writes of love, politics, loneliness, and justice. Like Neruda, she crafts odes to her elements (cooking greens), the body (hair, hips), spirit, and a large-scale idea of America. One of these includes what it means to be a black woman, something Clifton names, implies, connects with, and calls out from—often to her fellow women poets, from Gwendolyn Brooks to Margaret Walker to the late Adrienne Rich. One of her earliest poems, from the 1950s, is “To E.D.”—Emily Dickinson, whose short lines and unique punctuation, or lack thereof, Clifton would seem to call kin. 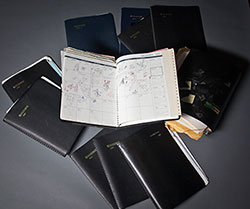 In Clifton’s hands, the ordinary, including punctuation, is transformed—like Superman, who figures in some of her poems, she leaps and soars, crossing bridges as one poem has it, “between starshine and clay.” She is also a poet often engaged with the mystic, whether in receiving “messages from the Ones” or writing as the “two-headed woman,” that soothsayer and homemade prophet. If Whitman’s poetic self contained a multitude, Clifton embraces the multicultural multitude by writing through the fact and metaphor of family.

Curated with Amy Hildreth Chen, Emory PhD student in English, this exhibition includes a family reunion of writings by Clifton taken from her archive in the Manuscript, Archives, and Rare Book Library—ranging from her earliest poems with their delicate penmanship, to poems composed on her beloved Videowriter word-processor, to last works composed at writer’s workshops, dashed off in an email, or found in her many daybooks. All are on view here in an exhibition that only hints at the breadth of her work and the richness of Emory’s holdings.