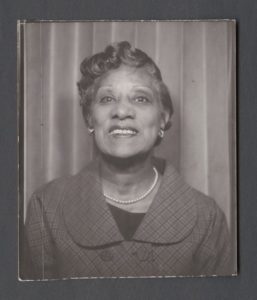 J.E. Morgan is the 2019-2020 recipient of the Mellon Interventions Public Scholar fellowship at Emory’s Rose Library. Morgan is a Ph.D. candidate in History at Emory and a member of the Lift Every Voice 2020 project team.

The Lift Every Voice 2020 project’s public history initiatives emphasizes that African Americans’ fight for citizenship and civil rights began long before the Civil War and continued into the twentieth century. In documenting and connecting all of the Rose Library’s Reconstruction-related materials, the project pushes against traditional chronologies that contain Reconstruction within a Congressional timeline that begins with the end of the Civil War and ends in 1877. Rather, Lift Every Voice 2020 draws from a multitude of archival materials that expand Reconstruction’s timeline on either side as they illuminate the many different ways in which African Americans challenged white society’s relentless, pervasive, and violent attacks against racial equality.

This expansion allows us to consider, as a part of the Reconstruction archive, the literary work of May Miller, including her 1935 play Harriet Tubman, Black Moses, found in the May Miller Papers. Born in Washington, D.C. in 1899 to Anna (Annie) Mae and Kelly Miller, she grew up in a household that hosted intellectuals such as W.E.B. Du Bois. Her father, born in 1863 in South Carolina, became Dean of Arts and Sciences at Howard University and was well-known for his publications on race, such as a widely circulated open letter to President Woodrow Wilson entitled “The Disgrace of Democracy.”

A student of the M Street School (founded in 1870, now Paul Laurence Dunbar High), May Miller developed her writing in a society in which literature created by whites “influenc[ed] the readers’ perception of blacks through the use of degrading and destructive stereotypes.” Later, as a member of Georgia Douglas Johnson’s S Street Salon, Miller and her contemporaries in the Harlem Renaissance pushed against such depictions to represent African American life and perspectives in their work.[1] Over the course of her life, Miller would compose over twenty plays that brought historical events into a current context, including slavery, lynching, and class bias. 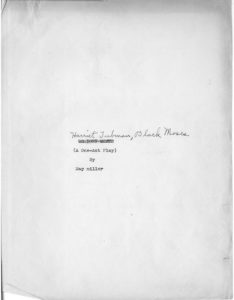 One of the handwritten copies of Miller’s play about Harriet Tubman. Miller or her editor appear to have debated the play’s title.

The Rose Library holds three copies of Miller’s play about Harriet Tubman: two typescripts entitled “Harriet Tubman, Black Moses (A One-Act Play)” and one handwritten copy entitled “Go Down Moses (A One-Act Play).” Miller or her editor appears to have debated the play’s title; on both of the typescripts, “Go Down Moses” is scratched out, and “Harriet Tubman, Black Moses” is written above it. The seven named characters are Tubman, her brother Henry and his “sweetheart” Catherine, a woman named Sabena, a man named Sandy, and two white overseers. The play centers on Catherine’s dilemma; she longs to escape with Henry but fears that her presence will thwart Harriet’s escape plan for everyone else. When Catherine learns of the enslavers’ plot to discover Harriet’s location, she implores Sabena to join her in helping Harriet and those she would lead to freedom to avoid capture. Halfway through the play, Harriet appears. Miller’s Tubman rejects the reverence of the enslaved people who fall at her feet, instead demanding their commitment to the mission and stressing the urgency and danger of their circumstances. Eight decades after the real Tubman risked her life to help people to freedom, Miller reminded people of the “realness” of Tubman’s actions in “everyday life.”[2]

As part of the Reconstruction archive, Miller’s play highlights the failures of Reconstruction by collapsing the time between slavery and the decades that followed. The play ends at the beginning of this group’s journey to freedom. We don’t see them cross into free territory. Miller doesn’t tell us whether Catherine married her beloved Henry. We don’t know if they made it, or if they did, how. But readers and audience members knew/know that the fight for equality wore on beyond emancipation and the federal government’s 1877 withdrawal of what protections it had offered to freedpeople. As an artifact of both the nineteenth and the twentieth centuries, it portrays the present dangers that people faced in slavery and shows the ways in which, some eighty years later, people were still thinking about and finding multitudes of ways to confront problems unresolved by the 13th, 14th, and 15th amendments.

Miller portrayed the past as very much connected to the present, particularly through women’s roles. As Ethyl A. Young-Minor has argued, the play “radically displays black women as central and active agents on the stage.”[3] Miller does this in part by portraying Tubman not as a vague historical figure, but as a woman making life-or-death decisions for herself and others in a single urgent moment. In this moment, Miller shows the shape and force of Tubman’s defiance of the institution that would have her and those she helped dead rather than free. For literary scholar and historian Saidiya Hartman, it was Tubman’s “unruliness” that freed her from the constraint of considering what might be done from within the realm of the institution that had enslaved her and her family. Unruliness enabled her to envision a future that was outside of and in opposition to these institutions. In the decades following emancipation, Tubman’s work continued to remind people that “experience was capable of opening up new ways,” and that there existed spaces—“a thousand new forms and improvisations”—outside the old institution’s apparatuses of power and control, which remained barely concealed behind new names.[4] Miller’s portrayal of Tubman allowed contemporary viewers and readers to understand her as an important historical figure. But she also portrayed Tubman as a woman whose actions could be instructive, particularly for African American women and girls, in imagining how one could create a new world not according to, but against, and to glimpse the possibilities of who they could be in such a world.

Tubman’s life’s work continues to shape how both scholars and the broader public perceive and represent an era in which people pushed for freedom against laws and social structures intended to shore up slavery and disempower free people of color. And it continues to shape understandings of how the history of slavery connects to continuing fights for racial justice. In 2019, the film Harriet drew audiences that surpassed industry projections. Five days after the film’s opening in theaters, historian Erica Armstrong Dunbar published her book She Came to Slay: The Life and Times of Harriet Tubman. Writing to a broad audience, Dunbar traces the paths Tubman created and built that stretched beyond emancipation, into the 20th century as a conductor, scout, spy, and raid organizer; a nurse and baker caring and providing for African American soldiers lying injured, sick, and abandoned by the U.S. government; a war hero who continued to fight racial violence and inequity, and a suffragist who fought for African American women’s rights. In turn, her work shaped that of generations of people who, like Miller, endeavored to re-envision and reconstruct society. As Dunbar explains, “Writers, activists, and ministers refused to let Harriet’s story be erased by time, and they continued to say her name.”[5]