We translated the Samothracian epigraphic data into Excel, recording a total of 116 sites and 819 individuals, noting the status the individual received, evidence for local priesthoods and shrines, suggestions of benefits which extended through generations, and gifts given to the gods. We then mapped these data into QGIS. See a map of these locations below:

The names on the inscriptions never appear more than once, and very rarely in any other source: with the exception of the family of a Cyzicene architect, prosopographic analysis is simply not possible. The cities, however, do appear more than once – and one of the major diagnostic decisions we have made is therefore to use the cities as nodes, e.g. actors, through the individuals who act as proxies for them.

Defining the edges is the trickier part. As Sindbaeck has noted of archaeological networks, here we must model possibilities to synthesize what the network may have looked like – rather than analyze recorded interactions and geospatial itineraries ((S. Sindbaeck, ‘Broken links and black boxes: material affiliations and contextual network synthesis in the Viking world’, 71-94 in C. Knappett, ed., Network Analysis in Archaeology: New Approaches to Regional Interaction. Oxford University Press 2013)).  Our source for this probabilistic network is the 28 block grants on Samothrace, which record proxenia added to theoria for individuals, listed in columns under the names of their cities. These reflect representatives from up to 17 poleis on the island at the same festival – and thus a rare record of ‘face time’, despite all the challenges of dating these inscriptions, which often may best be placed within the range of one or two centuries. We build on the hypothesis that these cities have a higher statistical likelihood of cooperation and collaboration when meeting away from the island.

We used DJANGO to create a platform which would provide access to a relational database that we created from these Excel sheets, and which could support data exports for both Gephi for SNA and QGIS. The database structure reflected the relationship between inscriptions, sites, individuals and their status, which allowed us to move into an analysis of the interactions we needed. 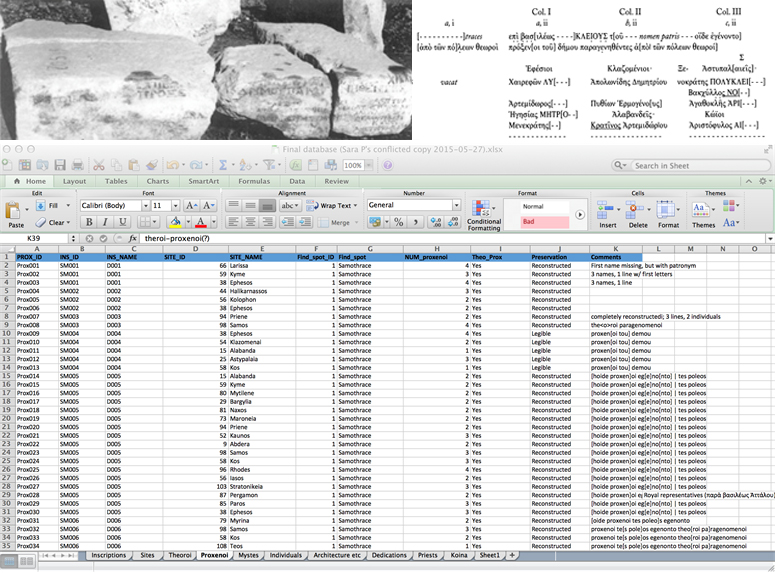 Creation of a Relational Database: evidence from stones and their inscriptions, catalogued into tables

Most inscriptions link to multiple sites, and most sites to multiple individuals. We recorded their status as mystes, theoroi, proxenoi, or priest; separate tables organize the data for priesthoods, physical markers such as altars and votives, and local koina.

All of these data come into play when we seek to identify the degree centrality of each site – which is to say, how the number of edges it has connecting it to other sites. For this the simplest approach is to count the number of names and inscriptions we have – the results seen in this pie chart. The number of individuals per city ranges from 40 to zero; the number of inscriptions per site, from one to ten. This yields a simple quantitative measure of one city’s degree. 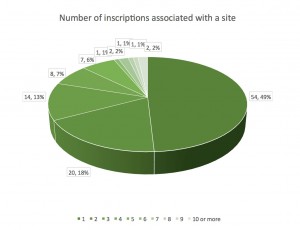 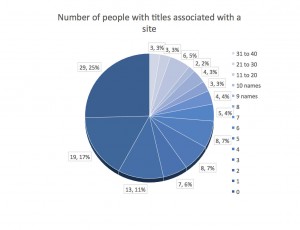 The inscriptions, however, give us more than names – we have considerable information about the status of the individuals and the weight of Samothrace’s cult in these cities.   In order to integrate these data, we have set up a grading system which assigns values based on visibility, frequency of performances, and economic expenditure. 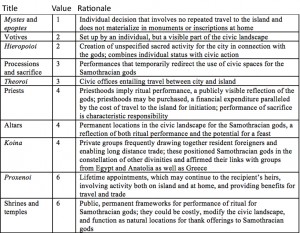 Chart of the Grading System

A Mystes, for example, has score of 1 – the decision is individual, involves no repeated travel to the island, and does not take material shape in monuments or inscriptions at home; altars are a 4, as they represent a permanent locations in the civic landscape for the Samothracian gods, a reflection of both ritual performance and the potential for a feast. This offers a more nuanced appraisal of the likelihood that a given city played a significant role as a node in the Samothracian network.

A demonstration of the results is shown here for a single block grant, IG XII.8. 170. By counting simply the names on the stone, we have a collection of nodes of approximately equal degree. 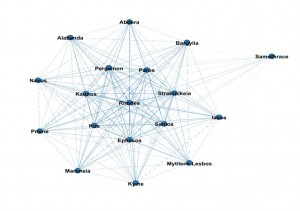 When we add qualitative to quantitative analysis – Three of the 17 nodes (Ephesos, Samos and Rhodes) are markedly more robust, while the majority (ten) remain in the smaller (red to orange) level. 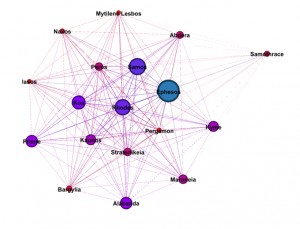 When we factor in the sites removed by one degree of separation, we see a shift in the degree centrality of certain nodes, as Abdera goes from red to blue.  When this data is mapped onto geospatial coordinates, we see that the highest grade node is mid-point in the Asia Minor coast – traditionally identified as the heart of the Samothracian network. 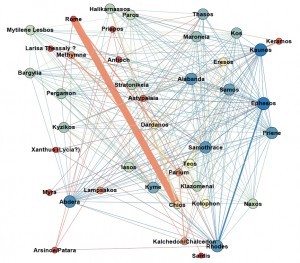 Random Layout of IG XII.8. 170 plus nodes with one degree of separation, by Degree

Geographic Layout of IG XII.8. 170 plus nodes with one degree of separation, by Grade 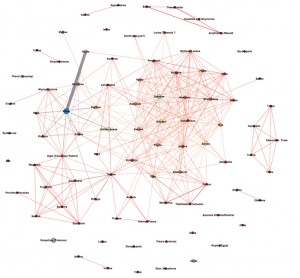 Scale-free networks  tend to be are robust and resilient to failure, though vulnerable to attack ((Callaway, D.S.; Newman, M. E. J.; Strogatz, S. H.; Watts, D. J., “Network Robustness and Fragility: Percolation on Random Graphs”. Phys. Rev. Lett. 85 (2000): 5468–71; Cohen, R.; Erez, K.; ben-Avraham, D.; Havlin, S. “Breakdown of the Internet under Intentional Attack”, Phys. Rev. Lett. 86 (2001): 3682–5)). They are also characterized by non-random patterns of formation  in which the rich get richer – larger nodes tend to be preferential points of attachment. This puts us in a position to make models of the emergence of the Samothracian network.

If we view this in geospatial layout, we note immediately the predominance of red sites which reflect small grade – note how Karpathos, for example, looms large because of the one stone preserving annual priests of the Samothracian gods. 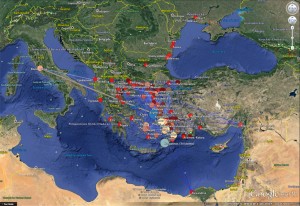 Graph ranked by Grade, on top of a Google Earth map

Our largest nodes or hubs include Kyzikos and Ephesos. A look at Ephesos’ role supports the argument for robustness: we removed Ephesos several times, and saw that the greatest impact was on the smaller nodes – though its loss was not severe. 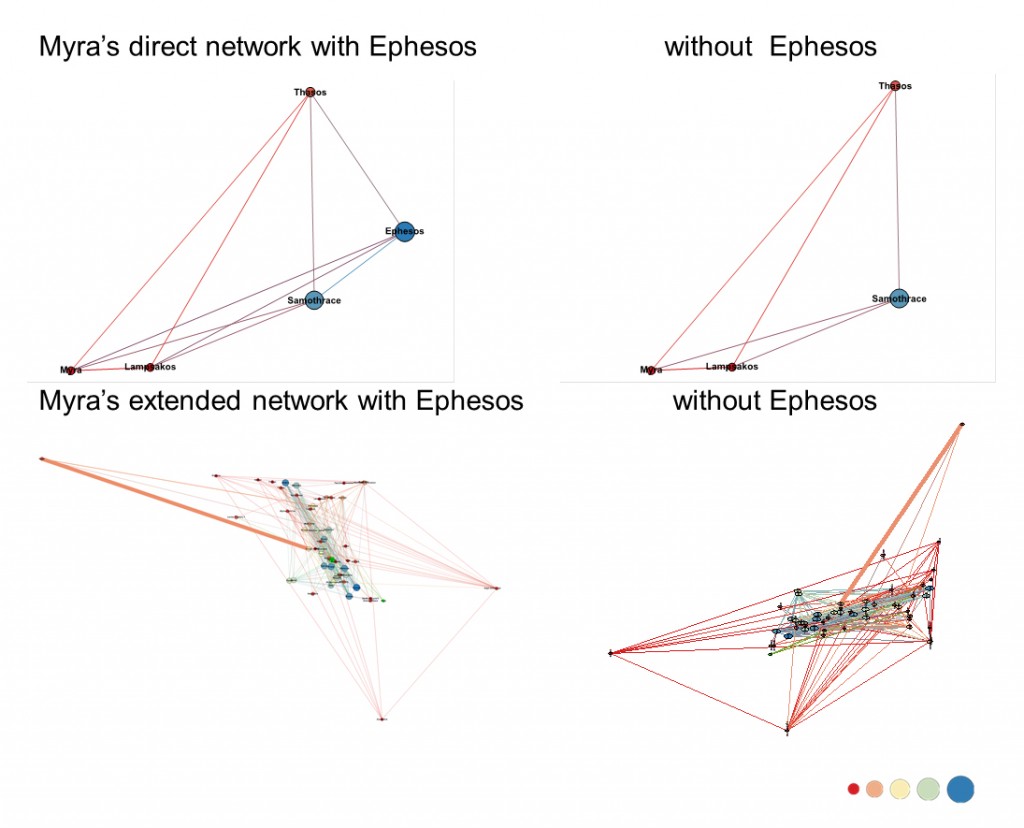 The Network of Myra with and without Ephesos

Myra and Lampsakos are both relatively small nodes with direct ties to Ephesos; Myra, however, on its own has direct ties to the cities it shares with Ephesos’ network – so does not suffer from the loss of this hub. Lampsakos demonstrates shows the change of degree when the larger node is removed – other sites become less robust in their connection, but do not lose the connection entirely.  The impact on the network is a question of the efficiency of other nodes, not its total extent This is consistent with the nature of a sparse network – there is more than one path for many of these – and the whole is thus resistant to failure. 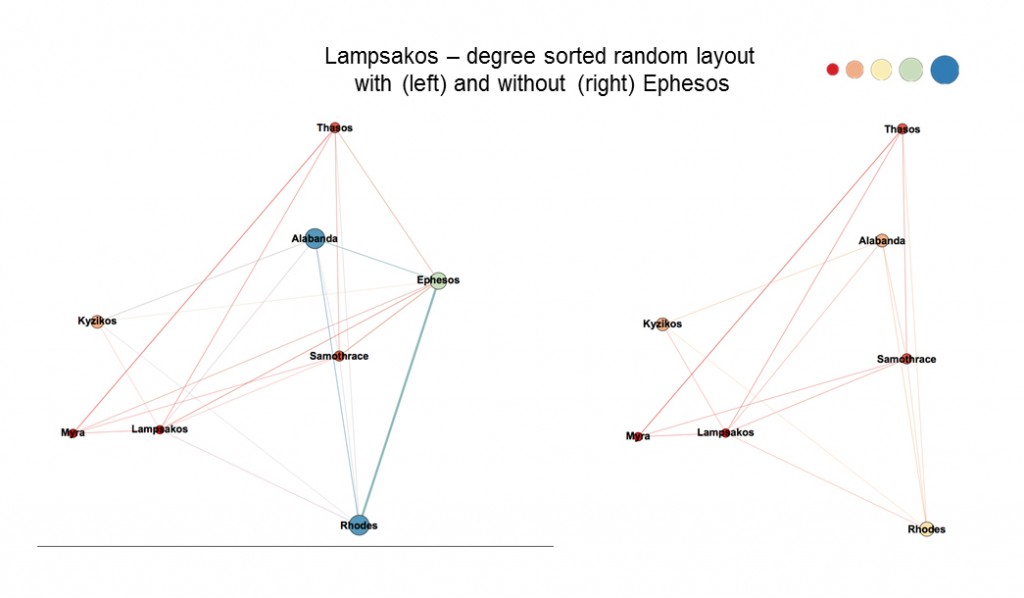 Force analysis renders more visible the clustering of nodes within the whole network.  Running a force analysis in Gephi shows that nodes without attested edges simply drop from view. Some of these are unsurprising: Tegea, for example, is geographically isolated from the bulk of the Samothracian affiliated cities.  Others, however, show high scores in their connectedness through myth and ritual practice, and are geographically proximal to highly connected Samothracian cities. 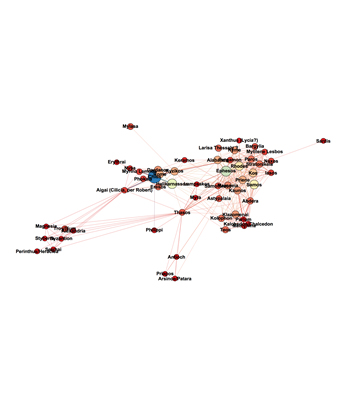 At Miletus, for example, the Samothracian gods figure in the town’s legendary history, and a citizen woman dedicated an entire building on Samothrace. Miletus’ absence from the network may suggest the lacunae in our data, or the more historically interesting hypothesis that some cities found different articulations of the Samothracian connections more productive than theoria and proxenia -– the koina, for example, are especially abundant on Rhodes and in the Black Sea. 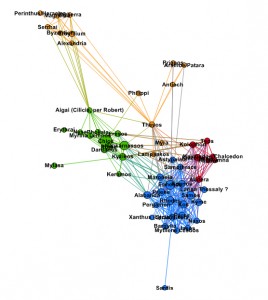 When we apply the force analysis we can see the formation, moreover, different communities, organized as isolated clusters of highly interconnected nodes   This is consistent with topologies of scale free networks, which demonstrate that networks can be both highly clustered and scale free when small, tightly interlinked clusters of nodes are connected into larger, less cohesive groups

The force analysis also foregrounds two new questions to investigate.  As a specific level, we see the role of Thasos and Aigai in connecting them. This encourages us to go much more closely into the available historical information.  These clusters also suggest a pattern we will explore more thoroughly with metrics for average pathways – the closest communities in the network are not those which are geospatially proximal: one has far less preference for one’s neighbors than for those at a maximal remove. Rhodes’ Samothracian cluster, for example, skips over many Samothracian sites on the southeast Asia Minor shore, in favor of locations on the Black Sea; it shows no links to Karpathos, where priests were appointed for the Samothracian gods on an annual basis, and Astypalaia is at the far edge of its community. The tendency to prefer connections from farther afield may reinforce the hypothesis of the significance of information sharing through Samothracian ties – as news from a distance is naturally more reliant on highly crafted channels.

Rappaport’s humanized nature would shape human cognition as well as the physical landscape and social institutions. When that nature is the ancient Samothracian seascape, it is the first of these that the data are most suited to reconstruct. The evidence suggests that this seascape was characterized by robust information flows, benefiting from the existence of a smaller number of significant hubs, but not relying on any one of them for its longevity; the scale-free quality suggests our ability to model the emergence of the network from the perspective of the individual city states – ground up, as opposed to Samothrace-out.  Gephi, focused on the nearly anonymous individuals who traveled to the island for initiation and festivals helps us construct a model of the rites and their impact that identifies new questions for investigation – some site-specific, some system-wide. This inverts the focus on great monuments which naturally dominates studies of terrestrial religion – and suggests the intellectual pathways that await as we investigate the gods on the sea.