In Samothrace Mariner, a study of ritual and mobility in the ancient world, we are building bridges between:

These three approaches– research, pedagogy, and popular culture – are united through shared reliance on a unique database built on ancient sources. The core of the database comes from inscriptions, a form of historical data least accessible to the non-specialist.  These inscriptions have provided the geospatial and chronological parameters for a QGIS platform; to this we bring data from ancient history, poets, geographers and politicians, giving access to ancient voices located in the geospaces they occupied.

Our interest at all three levels is maritime mobility: how did ancient travelers move safely through seas as full of risk as profit?  Highly developed sailing skills were one route; social contracts, often guaranteed by the gods, were another. These contracts, part of the Greek institution of proxenia, bound the parties to non-aggression, information sharing, and mutual support in ports of call. See “how it worked.”  They are recorded on inscriptions which provide dates, places, and the names of otherwise anonymous individuals charged with ensuring their city’s good behavior toward travelers and merchants from other cities around the Mediterranean world.

Our project began with an investigation of the mystery cult of the Great Gods of Samothrace, a cult which was unique in promising safety in sea travel as the reward to its initiates. See more information on Samothrace.  We are expanding our focus in two ways, positioning the Samothracian promise in the larger Mediterranean world of proxenia, and incorporating the legend of the Argonauts. The Samothracian network of proxenia supports extensive analysis of the social networks created among its participants: these let us model how the information flows and social contracts from that site would have worked. In an ancient world full of ritual responses to maritime risk, Samothrace became the most famous and most prestigious of the rites to ensure safe travel: the addition of the other networks will provide a more nuanced analysis not only of the Samothracian sea these contracts created, but of the wider world in which Samothrace took pride of place in its maritime effectiveness.

Adding the Argonauts: from research to pedagogy and gaming

The inscriptions from Samothrace let us model how nearly anonymous ancient people interacted under the protection of those gods. We can hypothesize likely itineraries based on node centrality, but we lack any indication of actual routes taken.  The myth of Jason and the Argonauts is the oldest Greek epic of long distance voyaging. Its sailors took care to get Samothracian initiation enroute:

…..In the evening, at the suggestion of Orpheus, they brought their ship to Samothrace,
the island of Elektra, daughter of Atlas.  He wished them to undergo
holy initiations, to learn the rites that may not be uttered
in order to sail with greater safety over the chilling sea.
Of these I will speak no further; but I bid farewell to the island and the daimones who dwell within her,
to whom belong the mysteries, which it is not lawful to speak to the uninitiated’
Apollonius of Rhodes Argonautica I: 916-921:

Unlike our epigraphic records, the epic positions the Argonauts’ initiation in an itinerary which reached from the Black Sea to Italy and south to Libya. It also provides accounts of how the Samothracian gods intervened to help these sailors.  Cybele helps the Argonauts when they are stuck in port at Cyzicus, with no wind to help them (Apollonius of Rhodes Argonautica 1.1104-1152); the Dioskouroi, in the midst of a storm at sea, experience the miraculous appearance of two stars over their heads – the iconography for their identification with St. Elmo’s fire  (Diodorus Siculus 4.43.1-2).  The lessons learned from the epigraphic record, however, encourage us to look more broadly into the Argonautica for traces of the practical human actions which would have assured safe sailing.

Toward that end, we have collected the geospatial data for each of the Argonauts – not only the route they sailed, but the town of every sailor’s origin and experience. Each man, a hero in his own right, brought his own family history as well as his city’s associations with him onboard. These provided the potential for cooperation in port, as is demonstrated by Jason’s eagerness to share each crewmember’s genealogy with his dinner host Lycus in the land of the Mariandyni (Apollonius of Rhodes Argonautica 2.762-3).  The integration of the Argonautica into the scholarly analysis of networks opens a new frontier in integrating mythical and epigraphic information – an innovation with tremendous potential to bridge the qualitative and quantitative in our ancient sources. The epic is also, however, among the most visible in popular culture, inspiring movies in 1963 and 2010, a mini-series in 2000, and a series of games in the last decade. This has encouraged us to develop an exploration of the Argonautica aimed at the needs of primary and secondary school educators, on the one hand, and a game which will appeal to the broadest, most informal kind of public education. 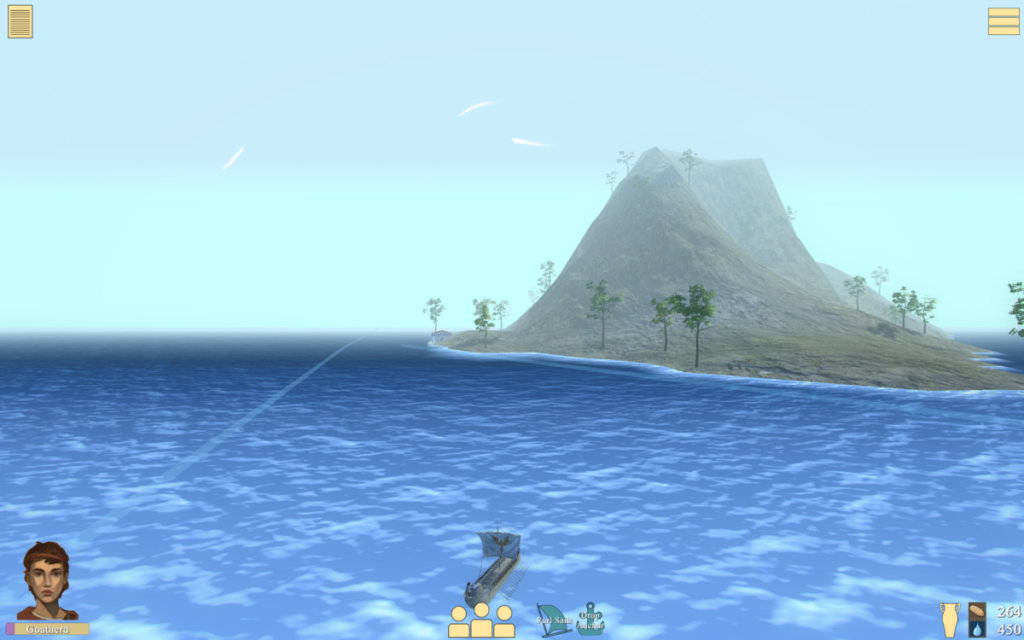 In the Game: Sailing with the Gods