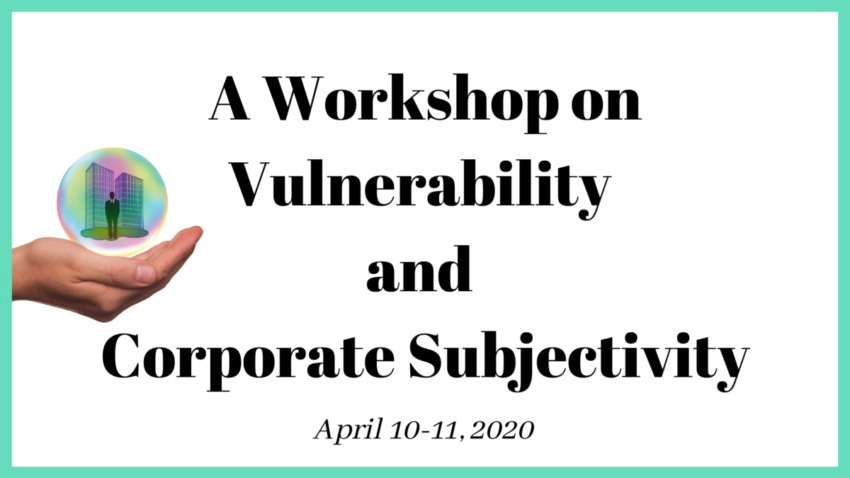 Vulnerability theory has long been critical of the liberal legal subject and an ideology that privileges consent and contract, manipulating concepts such as choice and autonomy to justify a restrained state. This workshop seeks to explore questions around the legal subject as manifested in its corporate form. The corporation is a legal construct, originally designed to meet social goals. However, throughout the years, and particularly since the rise of neoliberalism in the last decades, it has transformed into an institutional structure that often thwarts human well-being. The recent shift from liberalism to neoliberalism not only re-positioned markets and capital, it also reformulated the idealized legal subject at the center of law and politics. Neoliberal legal subjects—both people and the corporations they form—are reconfigured as “units” of capital that, as such, demand constant investment and management to maximize value. Such units of capital then serve as the mediating institutions through which, according to neoliberalism, social goods are justly allocated and social goals are ideally achieved.

Former French Prime Minister Lionel Jospin has been quoted as saying “yes to a market economy, no to a market society.” In a market society, individual vulnerability is addressed not by the state, but by private market actors. And if these actors are tasked to address individual vulnerability, then their resilience becomes a primary concern in the legal/political system. Has corporate vulnerability been permanently elevated above individual vulnerability? Consider the U.S. government’s response to the 2008 Global Financial Crisis: efforts went into bailing out corporations, while almost 10 million individual homeowners were left to foreclosure. The regulatory response to the crisis, the Dodd-Frank Act of 2010, sought to boost corporate resilience by focusing primarily on market actors that, according to this logic, were “too-big-to-fail.” The Consumer Financial Protection Bureau that the act created was highly controversial and has been largely defanged since 2017. The state may recognize the “universality and constancy of vulnerability and the need for providing mechanisms for building resilience,” but its efforts have been seeped in an ideological and legal “cult of corporate resilience.”

As new political and popular forces gain ground, corporations are proffering evidence, or perhaps just the illusion, of adaptation and evolution. Recently, The Business Roundtable, an association of large businesses concerned primarily with anti-regulatory lobbying, came out with a new “statement on corporate purpose.”Signed by close to 200 CEOs, it announced that corporations should be managed not solely in the interest of shareholders, but in the interest of all stakeholders, including employees, customers, suppliers, and communities. What are the implications for the individual and the corporation of this explicit acknowledgement that corporations are allowed or even should take individual vulnerability into account? How will corporations do so? Can they do so? If the pursuit of shareholder wealth maximization and economic growth at all costs are the defining characteristics of corporations and their purpose, then are corporations ever capable of compassion, kindness, and an accounting for human well-being?

This workshop will critically consider the neoliberal corporation, drawing on the analytical tools offered by the vulnerability theory. We welcome papers that utilize the vulnerability theory to interrogate the development of the neoliberal corporation, the values it reflects, and even the recent calls to expect corporations to care for individuals who are not investors. The workshop will allow participants to think through the complex relationships between corporations as legal subjects, legal or state governance of corporate activity, and the hope to achieve goals of social justice within a neoliberal age.

Issues for Discussion May Include:

Decisions will be made by February 14, 2020 and working paper drafts will be due March 23, 2020 so they can be duplicated and distributed prior to the Workshop.

Workshop Details: The Workshop will be held at Emory University School of Law on April 10th and April 11th. Please email Mangala Kanayson at mkanays [at] emory [dot] edu with any questions.