This is the second in a series of posts highlighting digital collections that celebrate Black history.

In honor of Black History Month, the Woodruff Library has compiled a small selection of recommended books and e-book collections for you to explore. Take some time to re-read a classic or find a new author to try! 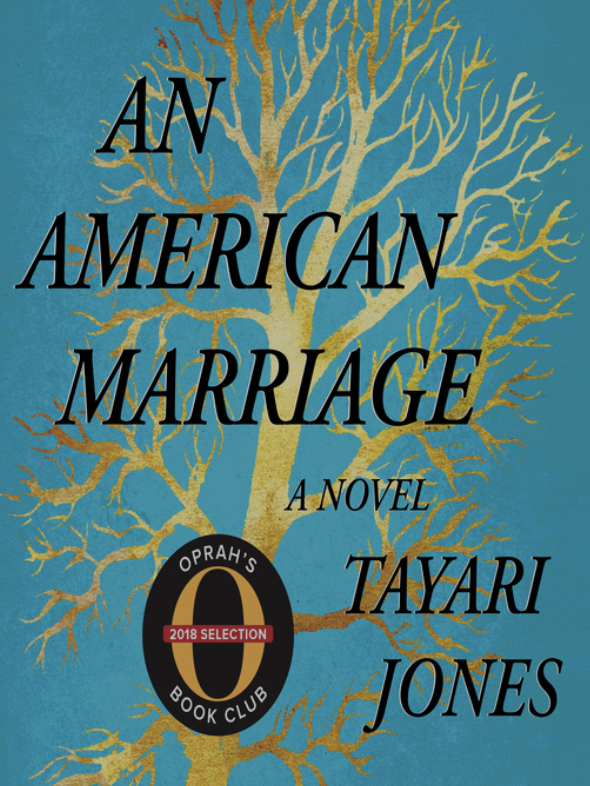 An American Marriage (e-book, audiobook) Newlyweds Celestial and Roy are the embodiment of both the American Dream and the New South. He is a young executive and she is an artist on the brink of an exciting career. But as they settle into the routine of their life together, they are ripped apart by circumstances neither could have imagined. Roy is arrested and sentenced to twelve years for a crime Celestial knows he didn’t commit. Though fiercely independent, Celestial finds herself bereft and unmoored, taking comfort in Andre, her childhood friend and the best man at their wedding. As Roy’s time in prison passes, she is unable to hold on to the love that has been her center. After five years, Roy’s conviction is suddenly overturned, and he returns to Atlanta ready to resume their life together.

Caste (e-book) The Pulitzer Prize winning, bestselling author of The Warmth of Other Suns examines the unspoken caste system that has shaped America and shows how our lives today are still defined by a hierarchy of human divisions.

The Water Dancer (e-book and audiobook) Young Hiram Walker was born into bondage. When his mother was sold away, Hiram was robbed of all memory of her, but he was gifted with a mysterious power. Years later, when Hiram almost drowns in a river, that same power saves his life. This brush with death births an urgency in Hiram and a daring scheme: to escape from the only home he’s ever known. So begins an unexpected journey that takes Hiram from the corrupt grandeur of Virginia’s proud plantations to desperate guerrilla cells in the wilderness, from the coffin of the Deep South to dangerously idealistic movements in the North.

We were Eight Years (e-book and audio book) A portrait of the historic Barack Obama era features essays originally published in The Atlantic, including “Fear of a Black President” and “The Case for Reparations,” as well as new essays revisiting each year of the Obama administration. “We were eight years in power” was the lament of Reconstruction-era black politicians as the American experiment in multiracial democracy ended with the return of white supremacist rule in the South.

Between the World and Me (e-book and audiobook) Coates offers a framework for understanding our nation’s history and current crisis. Americans have built an empire on the idea of “race,” a falsehood that damages us all but falls most heavily on the bodies of black women and men – bodies exploited through slavery and segregation, and, today, threatened, locked up, and murdered out of all proportion. What is it like to inhabit a black body and find a way to live within it? And how can we all honestly reckon with this fraught history and free ourselves from its burden? 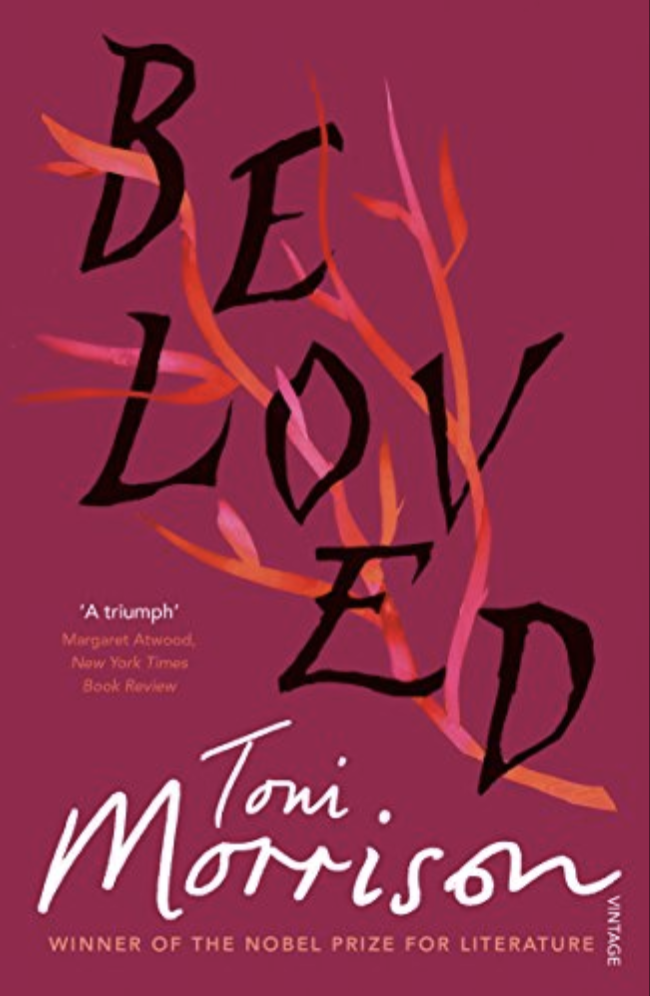 (e-book) After Paul D finds his old slave friend Sethe in Cincinnati, Ohio, he moves in with her and her daughter, Denver, and joins the farm. A strange girl named Beloved about Denver’s age comes along and she also joins the family but casts a mysterious and ghostlike aura over the house. Beloved seems to be the dead infant child of Sethe, who now speaks with a childlike hissing sound while the house rattles and objects move around. Her presence changes the lives of Seth, Paul D and Denver, and their hope for happiness is tainted with her presence.

Song of Solomon (e-book) New York Times Bestseller Milkman Dead was born shortly after a neighborhood eccentric hurled himself off a rooftop in a vain attempt at flight. For the rest of his life he, too, will be trying to fly. With this brilliantly imagined novel, Morrison transfigures the coming-of-age story as audaciously as Saul Bellow or Gabriel García Márquez. As she follows Milkman from his rustbelt city to the place of his family’s origins, Morrison introduces an entire cast of strivers and seeresses, liars and assassins, the inhabitants of a fully realized black world.

God Help the Child (e-book) The first novel by Morrison to be set in our current moment–weaves a tale about the way the sufferings of childhood can shape, and misshape, the life of the adult. At the center: a young woman who calls herself Bride, whose stunning blue-black skin is only one element of her beauty, her boldness and confidence, her success in life, but which caused her light-skinned mother to deny her even the simplest forms of love. There is Booker, the man Bride loves, and loses to anger. Rain, the mysterious white child with whom she crosses paths. And finally, Bride’s mother herself, Sweetness, who takes a lifetime to come to understand that “what you do to children matters. And they might never forget.

The Bluest Eye (e-book) Pecola Breedlove, a young black girl, prays every day for beauty. Mocked by other children for the dark skin, curly hair, and brown eyes that set her apart, she yearns for normalcy, for the blond hair and blue eyes that she believes will allow her to finally fit in. Yet as her dream grows more fervent, her life slowly starts to disintegrate in the face of adversity and strife. A powerful examination of our obsession with beauty and conformity, Morrison’s virtuosic first novel asks powerful questions about race, class, and gender with the subtlety and grace that have always characterized her writing. 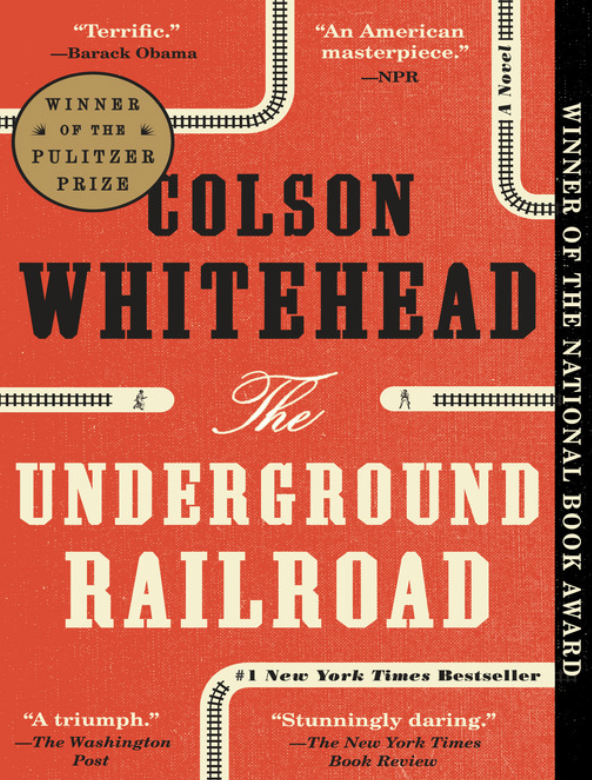 Underground (e-book) Cora is a slave on a cotton plantation in Georgia. When Caesar, a recent arrival from Virginia, tells her about the Underground Railroad, they decide to take a terrifying risk and escape. Though they manage to find a station and head north, they are being hunted. Their first stop is South Carolina, in a city that initially seems like a haven. But the city’s placid surface masks an insidious scheme designed for its black denizens. And even worse: Ridgeway, the relentless slave catcher, is close on their heels. Forced to flee again, Cora embarks on a harrowing flight, state by state, seeking true freedom. 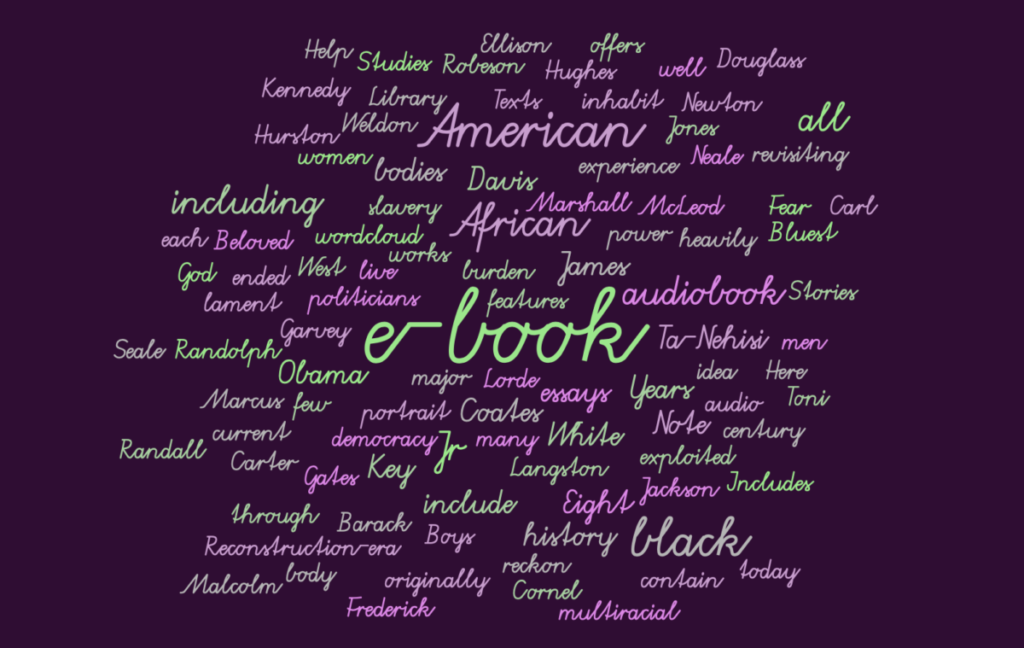 Need more recommendations? Check out this list created by the Schomburg Center at the New York Public Library in honor of Black History Month.

Suggestions? Would you like us to acquire e-books by African American authors? Contact Erica Bruchko (berica [at] emory [dot] edu) with your suggestions!