On January 1, 2022, copyrighted, published works from 1926 entered the US public domain, where they are now free for all to copy, share, and build upon. The lineup this year is stunning. It includes books such as A. A. Milne’s Winnie-the-Pooh, Felix Salten’s Bambi, Ernest Hemingway’s The Sun Also Rises, Langston Hughes’ The Weary Blues, and Dorothy Parker’s Enough Rope.

There are scores of silent films—including titles featuring Harold Lloyd, Buster Keaton, and Greta Garbo, famous Broadway songs, and well-known jazz standards. But that’s not all. In 2022 we get a bonus: An estimated 400,000 sound recordings from before 1923 will be entering the public domain too! (Please note that we are referring here only to US law; the copyright terms in other countries are different.)

Here are just a few of the beloved and classic books that entered the public domain in 2022. 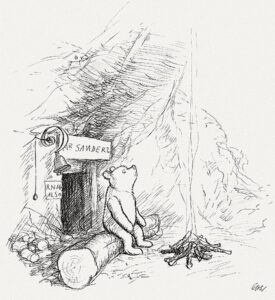 Illustration to page 3 of Winnie-the-Pooh (1926) by artist E. H. Shepard. Image in the public domain.

Thanks to a 2018 law called the Music Modernization Act, a special category of works—sound recordings—finally join other works in the public domain. On January 1, 2022, the gates opened for all of the recordings that have been waiting in the wings. Decades of recordings made from the advent of sound recording technology through the end of 1922—estimated at some 400,000 works—are now open for legal reuse.

What will we celebrate in 2022? Everything from experiments with nascent sound recording technology in the late 1800s to opera, classical music, early blues and jazz, vaudeville, ragtime, popular songs, and comedy sketches. With so many recordings to choose from, we can only feature a few of them here. To listen to more recordings, check out the selections from the Association for Recorded Sound Collections and go to the Library of Congress National Jukebox—in 2022 the Library of Congress will make all of the pre-1923 recordings in its collection available for download from this site, while recordings from 1923 forward will be streaming-only until they are in the public domain. As you look through the following list, note that only the pre-1923 recordings made by these artists are entering the public domain, not their later recordings. 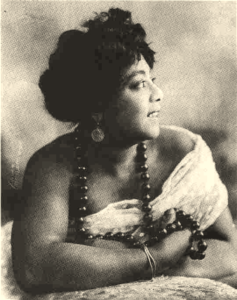 The first four films on the list include performances by the great Harold Lloyd, Buster Keaton, Rudolph Valentino, and Greta Garbo. 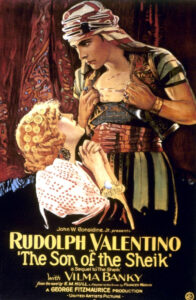 Poster for the film The Son of the Sheik (1926), starring Rudolph Valentino. Image in the public domain.

Moana is a work of docufiction filmed in Samoa by Robert J. Flaherty, who made the famous 1922 film Nanook of the North. Faust is a German expressionist take on the eponymous play by Goethe. Because Goethe’s play was in the public domain, the filmmakers were free to reimagine it.

Now that these works and thousands of others are in the public domain, anyone can make them available to the public, enabling access to our cultural heritage. 1926 was a long time ago, and the majority of works from that year are out of circulation. Since they are now in the public domain, anyone is now free to republish or post them online. The works listed above are just the tip of the iceberg. Many more works are waiting to be rediscovered.

This post is adapted from Public Domain Day 2022 (licensed CC BY 3.0) by Jennifer Jenkins, director of the Center for the Study of the Public Domain, Duke University School of Law.