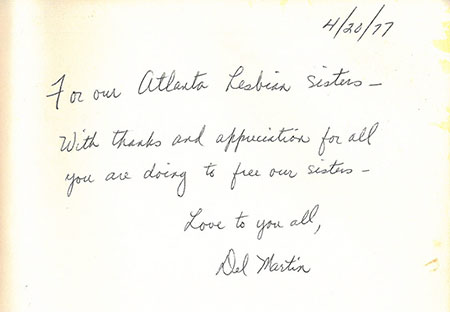 One of the most exciting things about working in MARBL, is the unexpected surprises that accompany archival materials. I was most recently surprised by the inscriptions I came across while surveying some of the rare books that comprise MARBL's LGBT collections.

MARBL holds many book titles that earn their status as “rare” due to their having one or more of the following qualities: being a first edition or limited printing, being formerly owned and/or annotated by a historically significant figure (such as a writer, activist, scholar), or being inscribed by the author. This information is generally accessible through discoverE, where researchers can view the details that qualify a book as rare and determine whether it is a book they would like to consult (as opposed to a copy held in General Collections). The status of “inscribed” only tells researchers that a book was, at minimum, signed by the author or another person involved in the publication process. Inscriptions can, of course, be longer notes that take on a variety of forms.

Here is a brief survey of some of the inscriptions that I have found:

Comprising part of the library of the Atlanta Lesbian Feminist Alliance (ALFA), Lillian Smith's One Hour (1959, first edition) has an inscription dated August 15, 1965. Smith writes, “For Paula (the second) as a memento of your visit with us in the mountains. Affectionately, Lillian Smith.” At first glance, this inscription is a sweet and simple note. Another look at the inscription gestures to Smith's life as a lesbian in the American South. Due to the political climate in which she lived, Lillian Smith and her life-partner, Paula Snelling, lived the majority of their life closeted. This inscription “for Paula” indicates the significance of Paula Snelling who was undoubtedly a more primary “Paula” in Smith's life. It witnesses the relationship of Lillian and Paula, and how they opened their mountain home to other writers and activists. 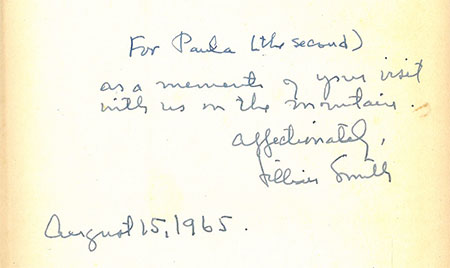 Inscription from Lillian Smith's “One Hour”

Also part of the ALFA library, Del Martin and Phyllis Lyon's Lesbian/Woman (1972, first edition) contains the inscription “For our Atlanta Lesbian Sisters- With thanks and appreciation for all you are doing to free our sisters- Love to you all, Del Martin” Martin's inscription, dated April 20, 1977, is a simple note that acknowledges solidarity in the gay and women's liberation movements. As founding members of the Daughters of Bilitis, a lesbian social and activist organization formed in 1955 in San Francisco, Del Martin's inscription documents the need for continued work to end discrimination against lesbians. (shown above) 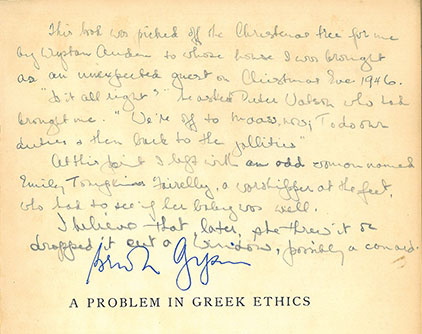 Brion Gysin inscription in “A Problem in Greek Ethics”

MARBL's copy of the book A Problem in Greek Ethics: Being An Inquiry into the Phenomenon of Sexual Inversion by J.A. Symonds offers a haunting example of an inscription that documents how inscriptions can serve multiple purposes. The book was privately printed for the AEOПAГITIГA Society in 1908. Somehow, the already rare book made its way into the social circle of W. H. Auden and his contemporary, Brion Gysin. The inscription, written by Gysin, is a short story of how the book came into his possession. Gysin writes, “This book was picked off the Christmas tree for me by Wystan Auden to whose house I was brought as an unexpected guest on Christmas Eve 1946. “Is it all right?” [Auden] asked Peter Walsh who had brought me. “We're off to mass now; to do our duties and then back to the jollities.” At this point I left with an odd woman named Emily Tompkins Fairelly, a worshipper of the feet, who had to see if her baby was well. I believe that later, she threw it or dropped it out a window, possibly a coward.” The inscription is followed by Gysin's signature of ownership. Gysin's “note to self” is no longer a private memory, but has become part of the public history of the literary circles in which writers such as Auden and Gysin participated. More specifically, Gysin's inscription documents how a small group of gay writers spent their Christmas in 1946—not with relatives or children, but with another kind of family, a family that was literary, gay, and welcoming of like-minded strangers such as Gysin.

In addition to these books, MARBL is home to many more books whose inscriptions gesture toward histories that can only be understood by piecing together fragments of the materials they left behind. Some of these fragments are accessible through public history resources such as local libraries and online encyclopedias, such as Wikipedia. Other fragments are accessible through MARBL that preserve additional manuscript and archive materials contextualizing the significance of these inscriptions. Complementing these incriptions, MARBL houses some of the personal papers of Brion Gysin, the library of W. H. Auden, the library of the Atlanta Lesbian Feminist Alliance, and many other collections that tell the stories of LGBT life in the 20th and 21st centuries.

In the spirit of public history and democratic access, MARBL is committed to keeping our doors open to any interested researcher, regardless of institutional or national affiliation. While no appointment is necessary to work with MARBL materials, we encourage researchers to contact Research Services so we can have materials ready upon your arrival, offer resources for additional materials related to your interests, and otherwise support your visit.