By 1971 Rubicon had become the largest in-patient rehabilitation program in the state of Virginia, maintaining extensive partnerships with the Department of Vocational Rehabilitation, the Medical College of Virginia(MCV), Richmond City Health Department, and the Richmond Public School system. Through its partnership with MCV it became the only federally approved methadone program between Washington D.C. and Miami.1   In a time where the merits and demerits of drug abuse treatment were in constant debate internationally Rubicon became the medium through which newspapers throughout the state of Virginia localized rehabilitation issues. By using the text-mining tools in R and a corpus of 80 newspapers from five different cities in Virginia a glimpse of this conversation can be gained.

The Corpus Over Time

The graph above shows that mentions of Rubicon generally declined over time. This is probably dues to several factor: the decline in novelty, the slowing of intake at Rubicon, and shifting drug control priorities. It also reveals the relationship Rubicon had with Petersburg. Many of Rubicon’s admits were funneled to them through the Petersburg court system. Interestingly enough mentions in the two cities with the Rubicon facilities near there localities drop of in 1973. This is in line with larger statewide drug arrest trends that show a dip in arrests in 1973.

Most Characteristic Words in the Corpus

Using TF-IDF(term frequency-inverse document frequency) statistic to extract key terms from the four newspapers that wrote the most about Rubicon can provide a distant look at the semantic difference between newspapers. For more on TF-IDF see Kan Nashida’s blog. 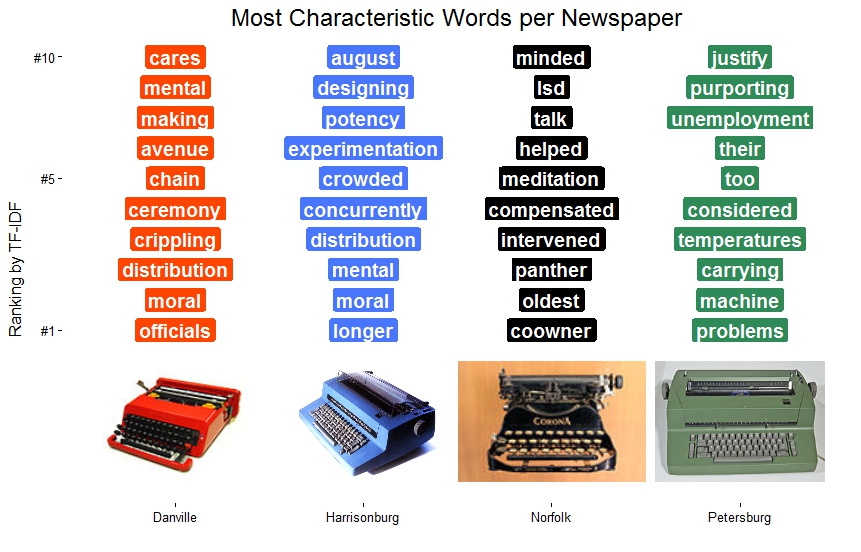 As can be seen TF-IDF produces some interesting results. The Danville newspaper uses words like “cares, “ceremony”, and “morals”, showing an interest in the positive impact of Rubicon. It also uses words like “chain”,”officials”, and “mental” which may reflect an interest in the organizational mechanics of Rubicon.  Similarly, Harrisonburg uses words like  “experimentation”, “crowded”, and, “designing” that imply and interest in how Rubicon was ran and maintained. The overlap of words between Harrisonburg and Danville may be due to proximity. The two cities were farther away from Rubicon then Norfolk and Petersburg and likely relied on the same AP reports. The Norfolk Journal and Guide is the only historically black newspaper in the corpus and discusses the black panthers more according to the TF-IDF metric. It is also the only newspaper that has a drug word(LSD) in its top ten of most characteristic words. Words like “mediated”, “helped”, and, “intervened” point to the expansion of Rubicon into the Norfolk area in 1973. Words in the Petersburg Progress Index reflect a similar closeness between Petersburg and Rubicon. “Unemployment”, “problems” and the disproportionately frequent use of “their” signify close economic and organizational ties.

The matrix above shows a close correlation between the word “Rubicon” and the plural “men” across the whole corpus. On the other hand, it also shows a negative correlation between “Rubicon”, and the plural “women”. Surprisingly, race did not play a significant role in the coverage of Rubicon in the newspapers even though it appeared frequently throughout the press during this period. 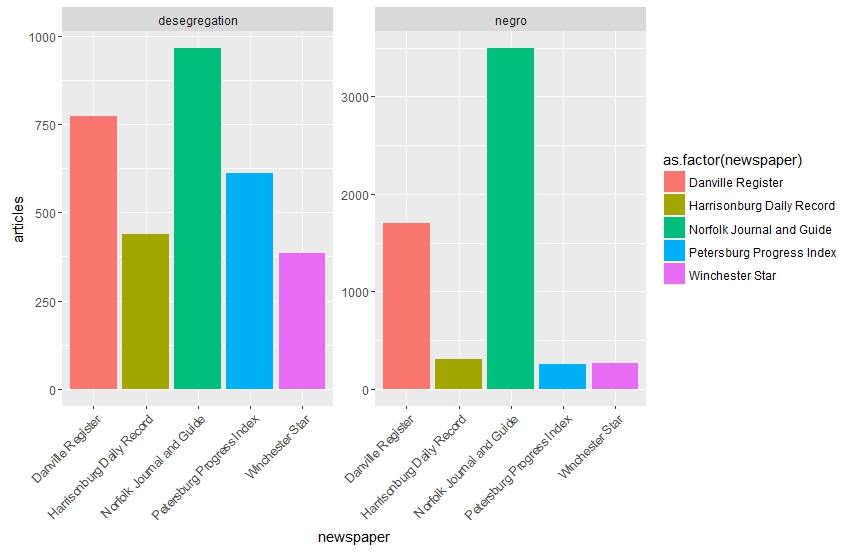 Rubicon’s relationship with the workings of the justice system is a bit more nuanced. Its important to remember that all of the newspapers mention Rubicon. The fact that Rubicon does not correlate highly with “rehabilitation” and “treatment” shows that Rubicon had reached a level of public notoriety that it no longer had to be described using these terms. Even so there is still a positive correlation between it and the words “arrested” and “court.” 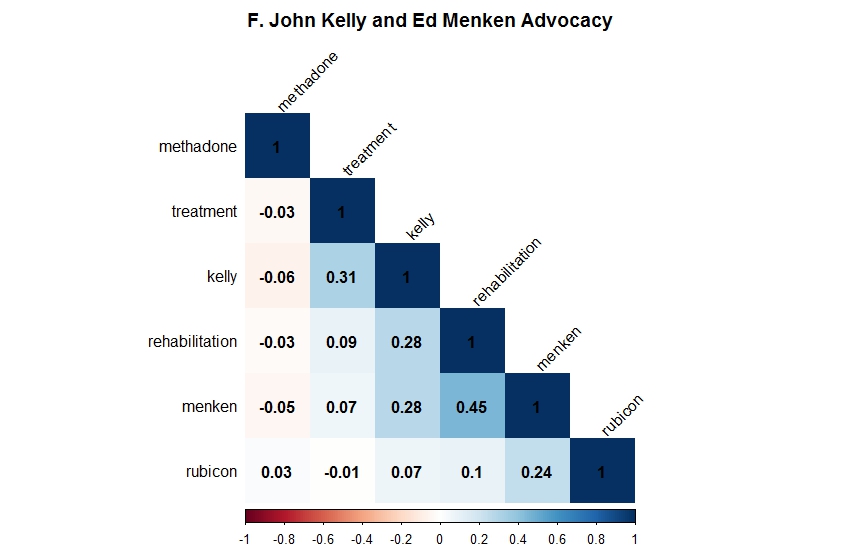 F. John Kelly, the director of the Governor’s Council on Narcotics and Drug Abuse Control, and Ed Menken the director of Rubicon had a sometimes contentious relationship in the press.  Menken frequently accused Kelly of taking a soft approach toward drug rehabilitation. The graphic above shows that Kelly correlates more highly with “treatment” but not “rehabilitation” than Menken. This could just be a matter of different word choices between the two after all Kelly is mentioned in 12 different articles while Menken is only mentioned in 6.

The positive correlation between Kelly and Menken denotes the level of dialog between the two. From the view of the frequent newspaper reader Kelly and Menken were locked in constant debate over rehabilitation resources and agendas. This constant pairing would have made Menken seem less like the Director of a private rehab and more like Kelly political equivalent. Another surprise from figure 6 is the lack of correlation between Kelly, Menken, and Rubicon with the word “methadone.”  Despite their advocacy for rehabilitation and treatment neither Kelly or Menken wanted to broach the controversial topic of methadone. 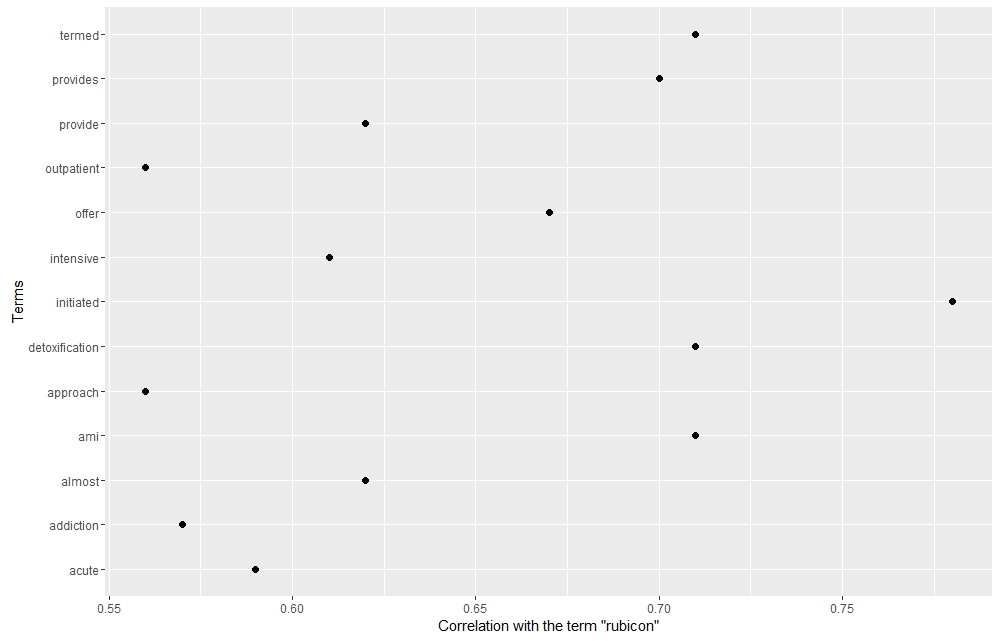 By analyzing the terms that correlate with Rubicon its institutional identity clearly exceeds that of its grassroots activist identity. Clinical terms like “detoxification”, “termed”, “outpatient”, “intensive”, “acute”, “provide”, and “offer” speak the business and medical side of the organization, and perhaps signify its movement toward a rehab ran by medical professionals rather than former addicts.  Coverage of Rubicon in the Virginia press neutralized the racial and activist components of the organization, thus helping to perpetuate the image of it as a state institution that both engaged in policy discussions and became a component of the justice system.