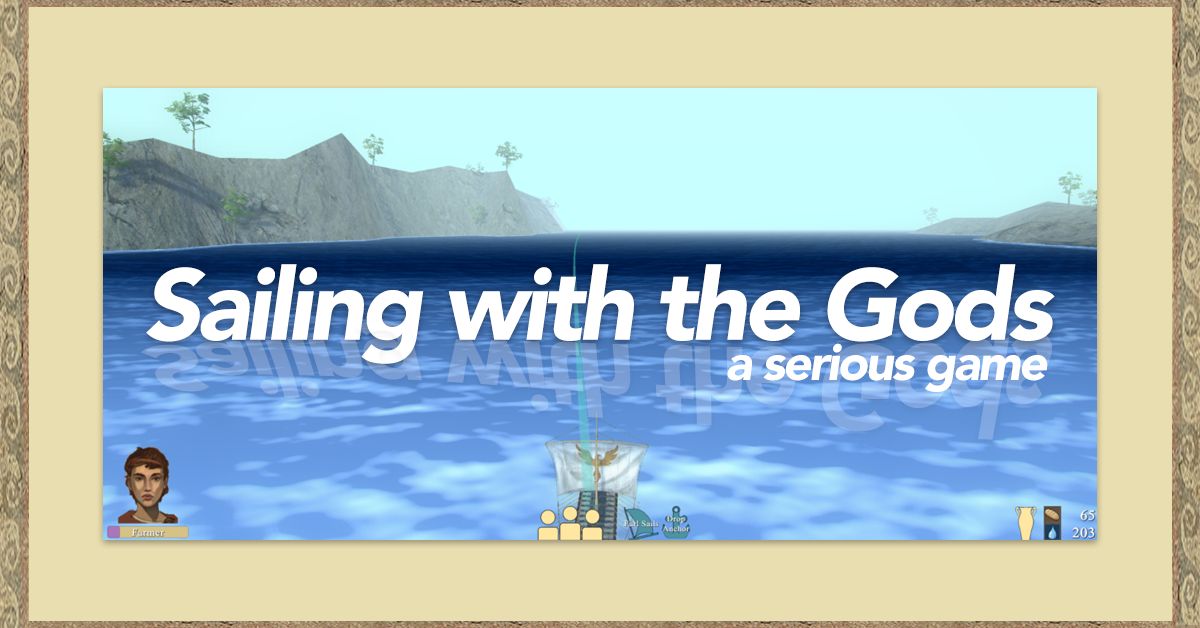 The Emory Center for Digital Scholarship (ECDS) is excited to announce a new version of the game Sailing with the Gods. Sailing with the Gods is a “serious game,” offering both a classroom resource and a scholarly framework for bringing the human experience of ancient seafaring to life. ECDS has supported the Sailing with the Gods project since its first launch in October 2016. In Spring 2020, the Emory University Department of Classics and ECDS partnered with the Kennesaw State University (KSU) Department of Software Engineering and Game Design course “Educational and Serious Game Design,” led by professors Joy Li and Rongkai Guo. The work this past semester between Emory University/ECDS and KSU has been an extremely productive partnership for training Kennesaw students in game design while building an open source serious game. Sailing with the Gods can be used for research and as a classroom resource in high schools and colleges to teach about the ancient world.

The ancient Greeks were master seafarers in a Mediterranean setting that was as full of risk as it was of promise. Storms and pirates, fluctuating political regimes, and rocky coasts comprised the risks; robust trade, networks of allies, and reputations that would stand the test of time were among the gains for those who put out to sea. The centrality of seafaring to Greek identity translated into the sea’s central position in ritual, myth and the cultural imagination. No Greek hero failed to try their luck on the waves; no Greek ship was unmindful of epic tales, helpful nymphs and angry gods. Digital tools afford robust new frameworks for teaching, researching, and exploring this maritime world.

Sailing with the Gods positions its players on the deck of the Argo, assuming the avatar of Jason, the mythic hero who led his Argonauts into the Black Sea.  Our players take up the heroic quest for klout and a hunger for reputation based on wealth, involving bravery and monuments that announce the great deeds and networks of associates invested in sharing the tale.  The game’s main character Jason embodies the drive for fame that every Greek sailor could share, from the pirate queen Teuta to a sailor on the humblest vessel, carrying the goods that held the ancient world together. Players find themselves in the geospatial and astronomical world of the Mediterranean in 2nd century B.C.; they must manage the physical demands for food and water, counter dehydration and heat exhaustion, execute the rituals that protect them from storms, and negotiate, fight, and conquer the real human risks of port masters and pirate bands.

Kevin Dressel has been working on the game since 2018, providing programming and design expertise. Kevin describes the students’ work, saying:

“This is the first build that shows off the work of the students from KSU. They’re involved in an ongoing effort to make the moment-to-moment gameplay richer. A major goal for this game is to get players engaged in the role they are playing – of being an ancient sailor. In past versions of the game, we’ve had random events that pop up a simple dialog box saying ‘There has been a storm. You have lost 3 crew members,’ or ‘Pirates have appeared and have stolen 5 kg of cargo.’ Now, those two random events have been expanded into full mini-games, completely designed by the students based on input from the team. The games both feature flavor text compiled by Dr. Blakely from historical sources, and they capture the experience of storm and pirate encounters in ancient Greece.

On the architecture side, this involved adding a new high level mini-game system and an expansion of the random event system. Now events can each have a weight, and are filtered by the state of the world. For example, now you must be in a zone that was historically populated by pirates in order to get that event. The students made modifications to the random event system to support this.

The students have also been working on improving the game’s support for multiple resolutions. This included adjusting the UI [user interface] scaling behavior, and creating a new resolution settings menu that reads the monitor’s available resolutions and allows the user to choose. This can form the basis of a menu to allow the game to run on less powerful hardware.”

Kevin added that “it has been great working with the students, and I can’t wait to show what they’re working on next! Their ideas for the storm and pirate mini-games have influenced a larger focus on interacting with characters across the entire game, which they are working on now.”

More about the students who built the mini-games

Kylie Gilde—newly graduated from Kennesaw State University with a degree in game design—worked primarily on the user interfaces for both mini-games. For the pirate game, this involved creating the cards and allowing the player to drag and drop them around the screen. The storm game was more involved, requiring her to turn the idea of performing rituals to affect the difficulty into a game mechanic, complete with costs, success chances, and consequences. She also made informational screens that are consistent between the two mini-games and helped load in all the text that is displayed as part of the mini-games. Kylie is primarily a C# programmer, although she is also comfortable with Unity’s shader graph and UI system and is always eager to pick up new languages and skills. You can see more of her work on her website or download some of her other games at https://games-by-kylie.itch.io/.

Donovan Fain focused his development on the code behind the storm game, spawning in clouds, boulders, and barriers for the player’s ship to traverse. Donovan says: “I have loved getting to know my team members and having the chance to grow and learn from each of them. Sailing with the Gods might have come into my life as a part of a course assignment, but it has become an aspect of my days that I genuinely look forward to working on and being part of. My favorite parts of working on the project have been learning about historical accuracies, learning new coding/programming concepts and practices, and working with my team in a collaborative manner to turn paragraphs of text into interactable mini-games that anyone would enjoy. There is never a dull moment with this project, and I never find myself losing interest in its presence.”  You can find out more about Donovan on his website or LinkedIn.

Timmy Hawkins—who also graduated from KSU in 2020 with a degree in game design—focused his work on the development of the pirate mini-game code. This turn-based card game allows players to battle pirates who attack as they sail the Mediterranean. Timmy comments: “I worked on designing and implementing the pirate mini-game for Sailing with the Gods. This game was great to work on, with only a few challenges along the way for us to overcome along the way to help make this game even better. I mainly focused on the design on the pirate mini-game, as well as implementing it in a way that it was easily usable and replayable, which made for a very fun project.” You can find out more about Timmy on LinkedIn.

Sailing with the Gods in Recent Scholarship

Scholarly articles about Sailing with the Gods have been included in such journals and books as thersites (Journal for Transcultural Presences & Diachronic Identities from Antiquity to Date), DATAM: Digital Approaches to Teaching the Ancient Mediterranean, and Data Science, Human Science, and Ancient Gods: Conversations in Theory and Method (forthcoming, December 2020).

If you plan on using the Sailing with the Gods game in your classroom, we would love to hear about it! Email us at: ecds [at] emory [dot] edu