It was September 2018 and I was at the top of a steep hill; the city of Heidelberg spread before me. Beside me were thirty other students, all of us brought together by a two week German education program.

A boy from our group leaned over to another girl and began to tell her – in Spanish – how the buildings spread across the hilltops reminded him of home – Quito, Ecuador. I listened to Mathias describe Quito to Mariona and when he was done, I grinned at them. I had understood! Not perfectly, but still. I knew they were talking about Quito. Which was something, considering I thought I’d lost all of my Spanish vocabulary when I stopped taking it sophomore year of high school. 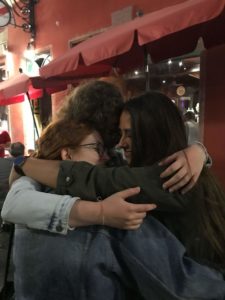 with my friends Mariona and Angela, who I met studying German in Heidelberg

Mariona laughed, “You speak Spanish?” But I didn’t – not really. I could barely form a sentence. Still, here I was, thousands of miles away from my former classrooms, trying to learn German, and realizing I could generally understand an Ecuadorian teenager explaining the landscape of his home city to a Catalan med student.

Okay but… how did I even get here? On a hilltop in Germany, deciphering the details of a Spanish conversation? What? Lucy? Huh?

There’s a very long answer to this question – how a year before I’d decided to take a gap year, how I’d arrived in Vienna to au-pair and realized my host family was… um… the worst. Then somehow I created an escape plan and ran away to do a German program. Well, okay, I didn’t actually run away, I told the family – the mom yelled at me which made me feel great – I stayed a week in Vienna on my own and then took a bus to Heidelberg. Kind of like running away though.

It had all happened so quickly that when I asked myself, “how did I get here?” I was too physically exhausted to really consider how it could have happened any other way. 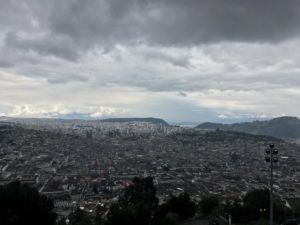 Quito in all her glory

fallen in love with the city. Why did I study in Berlin? Because I’d started taking German my freshman year of high school. And because of German, here I was learning Spanish again.

Learning a language has brought me to so many unexpected places, like that hilltop in Heidelberg, and it continues to, as my experiences build on each other, one after another.

And that is what a liberal arts education is all about – broadening your horizons and gaining knowledge from every pretty place there’s knowledge to be taken from, especially the places you wouldn’t expect.