Chickamauga and Chattanooga National Military Park serves as a nationally recognized space preserved in order to leave a physical historical record of the Battle of Chickamauga and the presence of the Civil War in this area. Our trip encompassed but a small portion of the more than 9,000 acres held under protection, however even from such a small slice we were able to glean a great deal. Much of the land has been maintained in such a way so as to resemble a battlefield, with large open fields of neatly trimmed or long grass and forests largely devoid of underbrush.

Our trip brought us first to the visitor center which outlined primarily the human history of this land and the efforts being made to preserve in the minds of the nation the battles held in this region. From here we traveled around the park, to Reed’s Bridge, Jay’s Mill, Wilder’s Tower, and a variety of other stops. Along the way we discussed terrain as a limiting factor in the battle and how the presence of open patch farmland prior to the war resulted in this space being ideal for the inevitable battle that would be held here. 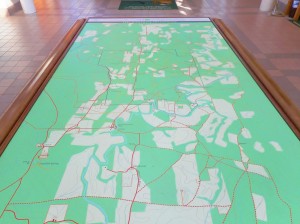 Much of northwest Georgia is located within the Ridge-and-Valley geological region characterized by elevation changes and rolling landscapes that form both canyons and some level spaces (such as those used for farming). Much of this unique landform is the result of faulting over millions of years with some metamorphic influences from past volcanic activity. Limestone, sandstone, and shale are the primary rocks found in this region and mining influences continue to shape the landscape (particularly in pursuit of limestone for commercial sale).

The history of human modification of the landscape of north Georgia is far from a recent one. Native Americans migrated into the area around Chickamauga and the southeastern United States roughly 12,000 years ago and became the first large-scale modifiers of the land both in a migratory and an agricultural role. Next came the era of the European as they colonized the land and engaged in practices such as commercialized logging and general urbanization as time went on. This continued on until the time of the Civil War, an incredible deadly and destructive period in American history for both the people and the land involved.

The Battle of Chickamauga and its ties to the Battle for Chattanooga are perhaps the best known modifiers of the Chickamauga and Chattanooga National Military Park region. Attempting to defend Chattanooga from the grips of the Confederacy, the Union troops pushed them south into Georgia and into this now-battlefield. While the Confederacy won on this land, Chattanooga was held by the Union. The city was invaded once more in the Battle of Chattanooga and the Union troops emerged the victor aiding them on their eventual quest for victory in the War and shaping the history of the United States of America as it is known today.

Today’s Chickamauga and Chattanooga National Military Park contains a visitor center and a myriad of monuments and statues spread out throughout the park commemorating the men and the places significant during the battle. The park is kept maintained in the areas where the battles were primarily held in nearly the same state as they were in the battle: flat and devoid of underbrush or even trees in large portions of the land. While there are large forest patches in the park, there is some question as to whether or not preserving the battlefields in their historical state depletes these spaces of their ecological health and benefit. 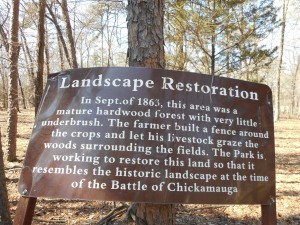 The Battle of Chickamauga has left a large and lasting impact on this landscape leading to both its protection from urbanization and a lack of reforestation of its fields. Weighing the costs and benefits of preserving this space for historical significance and protecting the natural environment here leads to a difficult question of what we, as stewards of the land, value in a space and what we save our natural areas for. Further study of the ecological composition and health of this land is needed as the National Park Service continues to protect this land and adjustments should be made as new information comes in to better serve both the significance and the health of this park.