The excavation in the Russell Cave in northern Alabama suggests that the earliest human settlement in the Tennessee River Valley can be traced back to 8000 years ago. From 15th to 17th century, native American tribes, including the Cherokee, Chickasaw, and Creek, lived along the river. During the colonial period, European settlers established settlements along the river at several major locations, including Knoxville, Decatur and Florence. However, this event ultimately led to the territory conflict between native tribes and colonists because both parties sought to the control of land along the river. As a result, the Federal Government relocated seventeen thousand Cherokee which is known as the Trail of Tears.

Originally, the upper and middle courses were not appropriate for water transportation because of rapids and inadequate water depths. Only the lower course was easily navigable. The situation changed in 1933 when Tennessee Valley Authority (TVA) was formed under the purpose of addressing “the Valley’s most important issues in energy, environmental stewardship and economic development”, according to the history introduction on TVA’s official website. Since its establishment, TVA has constructed 29 hydroelectric dams and several flood-control and recreational dams in the Tennessee Valley region, which raise water elevations and make the whole course of the Tennessee River to be accessible.

As the largest energy-generating corporation in the Tennessee Valley, TVA operates facilities from coal-fired plants and nuclear plants to hydroelectric dams and wind power plants. It has a profound impact on the environment and the future development of the Tennessee Valley. While we cannot ignore the fact that TVA has boosted local economy, provided reliable energy, and implemented efficient flood control, it also negatively influence the environment. For example, on December 22, 2008, its fossil plant at Kingston had a major leak of one billion gallons of wet coal ash to the surroundings and water body. 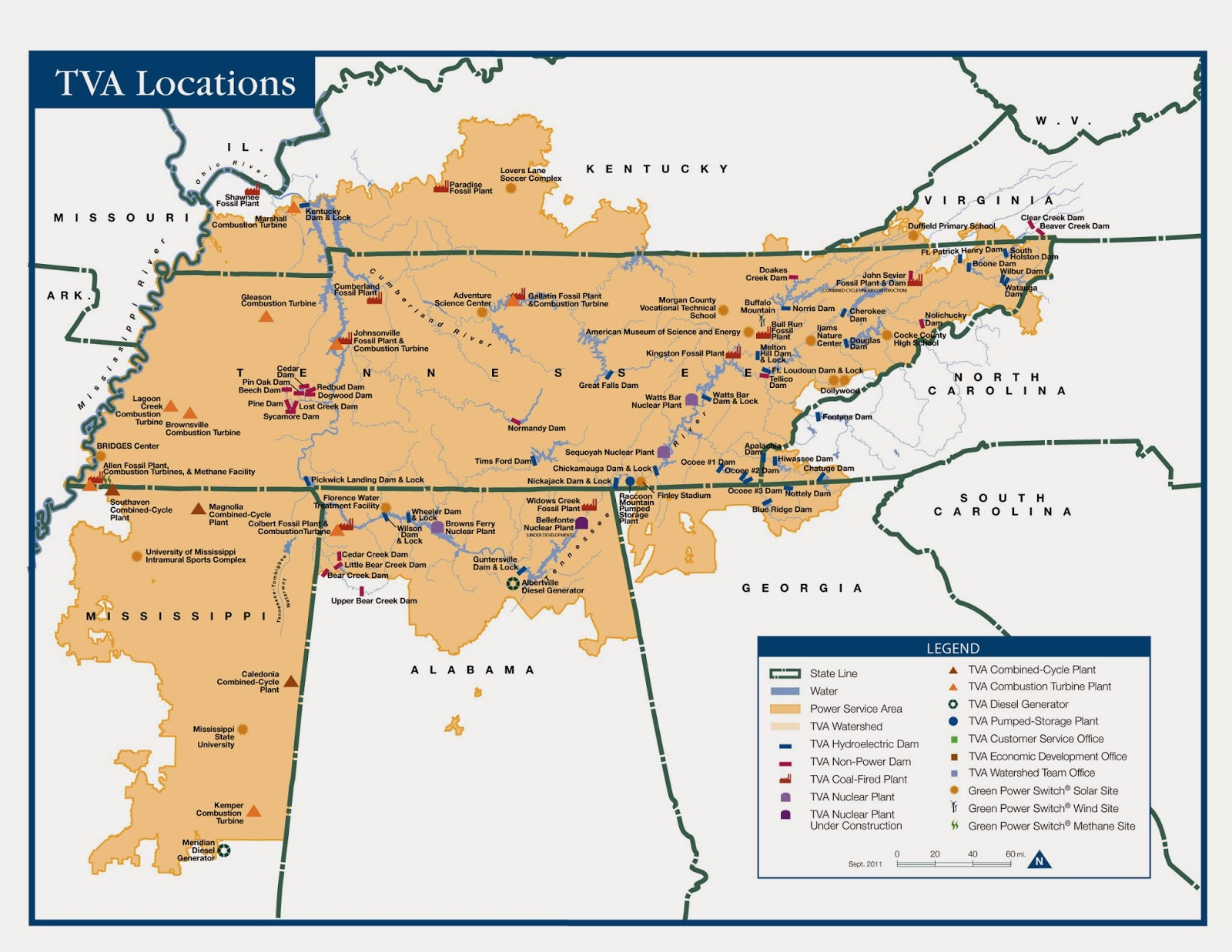 In the future, as a major environmental steward within the Tennessee Valley, TVA will improve land use, conservation effort, and energy generation to be more mature, which will eventually lead to an environmental-friendly development. This is evidenced by our team’s observation during our field trip. We visited the Raccoon Mountain Pumped-Storage Plant and saw some TVA-operated recreational areas for camping, lodging and trails (Read more about Raccoon Mountain’s development on TVA’s official website). This clearly indicates that even though the site primarily functions as a hydroelectric facility, TVA does not want to sabotage its surroundings in order to make profits. This multipurpose land use ensures a sustainable development that includes an increase in the economy and a conservation on the environment.