We would argue about what seasoning to put

And no this wasn’t pizza

To the days when satisfaction would come from a packet

And noodles were our gourmet meal

To the days we didn’t have much to deal with

And  growing up wasn’t part of this deal

As I stand in front of the microwave

Me and my glass of wine,

I open the ramen packet –

Only to be taken back in time.

1. What piece did you choose to imitate? I chose the poem, “Noodles in Broth,” by Hong Junju.

2. Why did you choose this piece? I chose this piece, because I was fascinated by its story telling power. The personification of food depicted in a powerful narrative. The poem that I wrote relates to my time at boarding school where Maggi noodles used to be our staple late night diet. We were vey carefree at the time and these noodles were a part of endless conversations and memories.

3. What did you learn about the culture of the original author through imitating his or her style?  His poem depicts a huge sense of nostalgia and a feeling of coming home. It creates memories related to home and makes the reader think about old times. By using the medium of food to convey these feelings, it increases the magnitude of emotions in the words. The author comes from a place that is famous for tea. Add to that, he is hinting at the aspect of ‘familiarity’ in Chinese culture.

4. What did you learn about your own culture while writing?   To me, Maggi isn’t a packaged food product, it is associated with memories from childhood to right up until now.  They have played a significant role in my life and have been an essential part of me growing up. They signify everything from friends, family to love and affection.

5. Is there cultural DNA embedded in the piece you read and in your piece? How does this DNA manifest in the texts?  This has a lot to do with where the author of the piece is from and what his personal connections are. The DNA manifests in the texts in the form personal anecdotes in their written format along with the style of the poem itself. These hidden meanings [DNA] form the basis of the piece.

Noodles are part of many staple diets across the world. Although their history and origin is primarily Chinese, they have travelled across the world and have been adapted by cuisines in many different countries. They area huge part of Chinese and Italian cuisines. Chinese noodles are usually long and they are said to symbolize longevity. They are very common among street food in China and are also a dish that is eaten in a family setting at home. In Italy, the noodle takes the form of pasta, which is part of the regular Italian diet. Pasta however, is highly commercialized around the world and is celebrated in various countries across the globe. Add to that, pasta is a very family oriented dish in Italy.

In India, the noodle is very significant because of a dish called Maggi. It is packaged ramen that takes about two minutes to cook, and is popular nation wide. It is something that everyone from children to grown ups enjoy. It is eaten as a midnight snack, lunch, dinner and when I was at boarding school, we ate it for breakfast sometimes. Maggi is loved because it is one of the most conveniently available snacks of all time. It is eaten at family gatherings, with friends and even alone. It is the definition of primary comfort food. It is an integral part of India’s culture because almost every individual has a memory associated with it – be it a child or an adult. In fact, it is so popular that several restaurants and street food stalls have adapted variations on it, making it the most versatile dish there is. Therefore, Maggi is a noodle dish that represents everything from family, friendship, finals week to simply being noodles that people are so fond of.

Food has played a very important role in my life. While growing up, my mother always made a dish called Rajma Chawal, which literally translates to kidney beans and rice. This dish is a kidney bean curry and rice dish and is by far my favorite dish under Indian cuisine. I went to boarding school at age 12, and the day I was leaving for school, I ate this dish. From then on, it became a tradition: I ate it every time I left for boarding school and it was the first meal I ate every time I came back for vacation. It is the same for college too. In fact, this time, when my parents picked me up from the airport in Mumbai, my mother got a Tupperware box with her that had Rajma Chawal in it and it was one of the most heart warming and comforting welcomes back into my home country. This is a traditional Indian dish and has been in my family for about 5 generations.
Rajma Chawal: 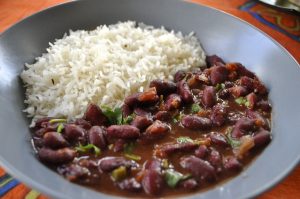 The second dish that has had a significant impact in my life is hummus. Although hummus is of mediterranean origin, it is made in my house every week . Both my parents are vegetarian and are very fond of chick peas and garlic. Therefore, it is daily tradition to have garlic hummus with pita chips at our evening 4 pm tea time.
Garlic Hummus: 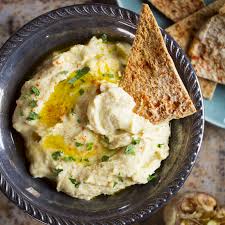 The third dish that I have a lot of memories with is a dish that comes under Parsi cuisine. It is called Anda Akuri, which is spicy seasoned scrambled eggs served with bread buns. When I participated in my first ever internship two years ago, there was a food stall right under my office that would sell this dish between  9 am and 2 pm. This was my favorite thing to eat almost every morning before work.

All the above dishes not only represent my personal memories but also represent my cultural background. The first dish has been in my family for generations. It was passed on from my maternal side. The second dish is an international inclusion in our daily tea time because it sits well with our Indian taste palettes. Hummus was first tried by us when my uncle made it at home after coming back from his on shore time at the merchant navy. However, the diversity in food is not just limited to my country and household.

Atlanta has a large Ethiopian, Persian and Iranian population, and I have had the pleasure of eating at restaurants that bring the culture of these countries to the United States through their food. One of my favorite Ethiopian places in Atlanta is Desta Ethiopian Kitchen, and my favorite thing to eat there are lamb tibbs, injera and miser. Tibbs being spiced and seasoned sauteed meat, Injera being a sourdough risen flatbread and Miser being spicy lentil stew. Another place is a Persian/Iranian restaurant called Rumi’s kitchen. My favorite thing to eat there is their Fesenjan, which is a Pomegranate Walnut Stew. 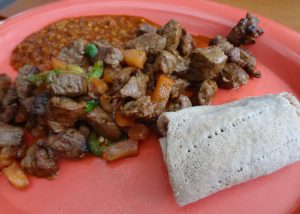 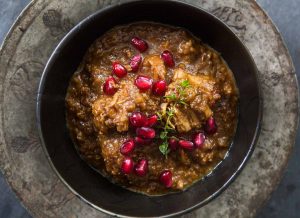