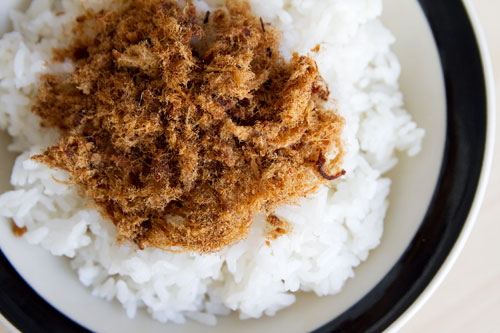 I grew up biracial, with one Asian parent and one Caucasian parent. My father was born in Thailand and considers himself Thai, but has ethnic Chinese lineage. My parents actually met in Japan. My mother really did not cook or have any cultural foods she passed on to us. Therefore, I grew up on a blend of Asian foods; mostly Chinese and Thai, with a Japanese influence. When I think of food that is important to my family, there are several foods that come to mind. My parents moved to the United States when they knew they were having their first child (me), and with that move my father left his life in Thailand behind for the most part. All of his other siblings and family have remained in Thailand, to this day. Shortly after he moved to the United States, his mother passed away. She taught him everything he knew about cooking, and I think cooking for us helped him keep his cultural identity, and also helped remind him of his mother cooking for him as he grew up. When I think of the food I ate growing up, the first food I think of is rice, always served soft and steaming. There was always one or more rice cookers in my house, and rice was served with every dinner, no matter what. We would often eat rice with homemade Thai green chicken curry. The curry always contained a delicate blend of spices and herbs, green beans, soft chicken, and just the right amount of coconut milk. I can smell it as I write. The ingredients were purchased from our local Asian supermarket. Creating curry with coconut milk came straight from my father’s Thai background, and using coconut milk is a frequent characteristic of Thai cooking. As a child, I remember seeing cans and spice packets with characters I could not read, and that always meant we were in for a delicious meal.

We also had eggs with almost every dinner. Eggs were typically prepared one of two ways. First, we often had a kind of egg omelette made with soy sauce, scallions, and garlic. It was served like a pancake and we would cut it into pizza slice-like triangles to be portioned out for everyone at the table. Just as often, we would eat boiled eggs. Looking back on it, our tradition of eating boiled eggs held a special significance. My father grew up in rural Thailand in a small home with his seven brothers and sisters. He told us that for birthdays, the birthday boy or girl would always receive one gift from their mother. That gift was one hard-boiled egg. This was special because he lived on a farm with many chickens, and they would usually collect and sell the eggs in town. The act of eating a hard boiled egg, though it may not seem significant to us, was actually a treat that my father and his siblings looked forward to greatly. So, the fact that my family was able to eat eggs (hard-boiled or otherwise) every night was a tradition that carried personal significance. I feel a great appreciation for his upbringing now that I look at it from this point of view.

As I mentioned, rice was served at every dinner. However, we rarely ate rice without some sort of complement. We sprinkled “fu,” a traditional dried pork product, over the rice whenever we could find it. My father would often buy “fu” on his trips to Asia, so it was always a special treat when it was in the house. As such, the “fu” supply was rationed and limited, and we viewed it as an extra special treat. Frequently my sibling and I would argue about who got more fu than the other at one meal, or we would accuse one another of stealing extra fu when no one was looking. They were such fun, wonderful meals together. It may sound unusual, but the dried salty sweetness of fu has to be tried to be appreciated. Another  favorite accompaniment to rice was “nori,” or dried seaweed. We would eat the nori out of big jars from the Asian supermarket. Now, I still eat nori with rice with my dinner as frequently as I can. We ate the fu because my father always loved it as a kid and he wanted us to be able to enjoy it, too. The nori was a popular food in Japan when my parents lived there, so they brought that tradition home. It was a nod to their time in Japan.

Last but certainly not least, my family regularly attended Sunday Dim Sum together. I would get so excited every time I knew we were going to dim sum; I feel excited just thinking about it right now. My father insisted that most Chinese restaurants in the United States were not authentic, but he assured us that the Dim Sum places he took us were authentic. Sometimes we would even go into Chinatown in New York City to get dim sum if we were feeling especially adventurous. We always ordered “cha shu bao” buns, shiny white buns filled with sweet pork in a red paste. Other favorites were shrimp shu mai and sticky rice. My personal favorite was turnip cakes, a solid turnip puree that was grilled and then sliced into rectangles. As we ate sticky rice with pork, we always heard the same story about how farmers in China and Thailand would eat sticky rice for breakfast early in the morning so that they could fill up their bellies before the long day of work ahead. I guess that explains why I always felt so full afterwards!

When I studied abroad in Spain, I gained exposure to a multitude of different ethnic communities. I lived with South Korean roommates, who taught me all about creating food carefully and with beautiful presentation. They would often make a triangle shaped food called “kimbabp,” and I will never forget how carefully they shaped the food and folded the edges into a perfect triangle. In addition, I had German friends in Spain who would make meats and a lot of egg noodles. In addition, they put mayonnaise on anything they could, such as meats, French fries, salads, etc. To be honest, it sometimes seemed that the food was just a vehicle for mayonnaise. The cultural affinity for beer among my German friends, however, was another story. Lastly, while I was in Spain I was able to experience what it meant to live like a European. More than any specific food, I learned that Spaniards enjoy their meals and take their time eating. They eat heartily and happily, with wine to accompany all good food. I admire the Spanish way of eating. In addition, the warmer the weather was, the later that people in Spain ate dinner. They valued happiness and enjoying their surroundigs outdoors, which I tried to adopt at the time.

I am very grateful for my upbringing, and the way that I was exposed to so many foods outside the American cultural norm at such a young age. Honestly, I have never thought about my family’s food history in such great depth and detail until now. I realize it is really remarkable the way that my father kept his cultural identity and traditions alive with food and cooking. I do not speak Thai or Chinese, but I do know how to cook traditional Chinese and Thai dishes. Those skills are part of my identity, and cooking and eating those foods reminds me of home and fills me with happiness. My family’s cultural traditions will continue through the food we make, eat, and pass on to the next generation.

Heat up a pot over medium heat and add the oil. Saute the green curry paste until aromatic, add the chicken and stir to combine well with the curry paste. Add the coconut milk and water and bring it to a quick boil.

Add the bamboo shoots, kaffir lime leaves, and red chilies. Lower the heat to simmer, cover the pot and let simmer for 10 minutes or until the curry slightly thickens.

Add the fish sauce, sugar, and basil leaves. Stir to mix well. Turn off the heat and serve immediately with steamed rice. 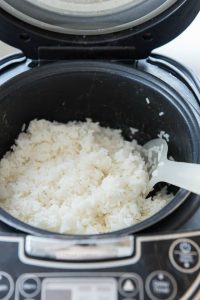 Above: Fresh, steaming rice in a rice cooker

Below: Fu, a dried shredded pork, over rice 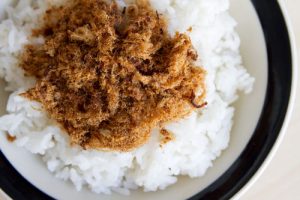 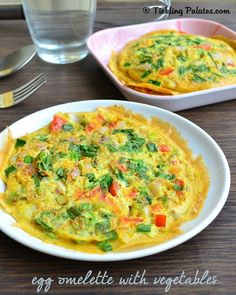 Below: Fu as it is often sold in Asian grocery stores. It can be sold as pictures, in plastic canisters or in plastic bags. 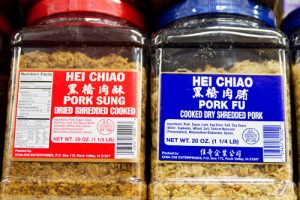 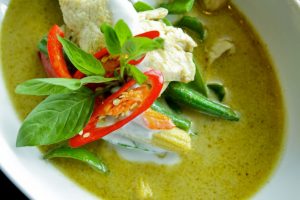 2 Replies to “My Food Upbringing”