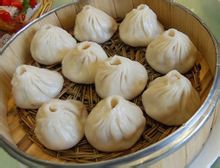 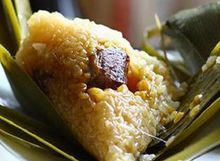 Rice dumpling is the traditional food for Dragon Boat Festival. According to the historical documents, Quyuan, both a politician and a poet from Chu – a country in Zhanguo period, was exiled by the emperor. He was very upset and drown himself in Miluo River. He was highly respected by citizens in Chu, and they threw rice dumplings into the river to prevent fishes from consuming his body. Also, they used boats to find his body. Thus, people commemorate Quyuan on Dragon Boat Festival and rice dumpling becomes a symbolic food for the festival. Green dumpling is the traditional food for Thom-sweeping Day when people commemorate the dead in Jiangnan area. According to the legend, Li Xiucheng, the leader of Taiping Kingdom of Heaven (from 1851-1864), was chased by the army directed by the emperor from Qing Dynasty on the Thom-sweeping Day. He was camouflaged as a farmer and the army did not find him. However, the army checked everyone to prevent farmers from bringing food to Li. A farmer mixed the juice of Chinese mugwort – 艾草, to make the dumpling look like grass, and brought green dumpling to Li. Li survived after he was fed on the green dumpling. Later, he made eating green dumpling on Thom-breading day a rule. 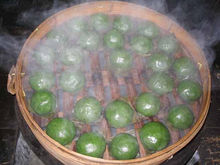 This legend is not verifiable in any historical documents but eating green dumpling on Thom-sweeping Day has become the tradition in my home city. It is made of rice and the stuffing is always the red bean paste. It may be too sweet for people from the Northern part of China, but it represents the cooking style in Jiangnan. In a conclusion, mini soupy bun from Wuxi, rice dumpling and green dumpling can represent my cultural background due to their deep historical backgrounds and unique cooking style.

There is a rich variety of ethnic groups in Atlanta and the Black is the major ethic group. Unfortunately, I never tried food from the black community. When I stay in Atlanta, Asian food especially Chinese food and Korean food is always my top choice. Besides, I tried several Italian restaurants. I used to take a Math class and the professor is an Italian. She recommended some authentic Italian restaurants to me and my favorite one is called Ribalta in downtown Atlanta. I love the pasta in this restaurant, but I do not think pizza there is authentic. When I was in Italy, I found there was no protein but only veggies and cheese in pizza. However, every kind of pizza in Ribalta has protein.

One Reply to “My Experiences with Foods”