Although I was born in the United States, my parents’ Iranian background has resulted in my extensive upbringing and immersion into Iranian culture and traditions. Thus, it is not a surprise that my favorite foods are not American, Italian, Chinese, or other types of food that we typically see at American restaurants, but rather are Iranian. One of the more well-known Iranian dishes are kabobs. Kabobs are indigenous to many Middle Eastern countries, including Lebanon, Turkey, and Pakistan, but the Iranian variation remains my favorite by far. The Iranian version of the kabob includes many variations itself with different types and regions of beef, chicken, and lamb being used, often making it difficult to choose a single dish among all of the varieties at Iranian restaurants. My favorites, however, are kabob koobideh, which is made from ground beef mixed with chopped onions and parsley, and kabob barg, which are fillets of beef tenderloin. Both kabob koobideh and kabob barg are grilled on skewers over a fire and served with saffron basmati rice. Another dish that is commonly sought after in Iran is the Persian ash, which is a thick stew containing a great number of different ingredients depending on the specific type of ash served. It is very common for individual Iranian families to have their own variation of ash perfected through several generations with secret ingredients and twists. My family’s favorite version of ash is ash-e-jo, which is made with barley, meat, and a variety of herbs, legumes, and spices. 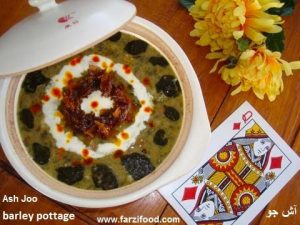 The taste of Persian kabobs and ash are undoubtedly exquisite. However, the cultural significance and traditions that accompany these dishes are what make them so enticing not only in my household but also in Iranian families all over the world. In Iranian culture, food is how you demonstrate your love and respect for guests, and thus, what you serve visitors sends a grand message about how you are treating them. The kabob is believed to have originated in the ancient Persian empire before spreading to the surrounding Middle Eastern and Mediterranean regions, making it a longstanding and important staple in Iranian culture. Kabobs, however, are very difficult to make in the home, so the best kabobs can be found in traditional Iranian restaurants. When important guests are invited to a Persian home, the host will typically order many skewers of different types of kabobs in advance to be either delivered or picked up for the gathering. When I see kabobs being served, I feel a great sense of appreciation toward the host for the respect they are expressing toward us. The Persian ash is similarly a very difficult dish to make, requiring a whole day’s worth of preparation of ingredients and cooking. Thus, it is not normally served at typical parties consisting of just friends, but rather is served at small gatherings with family members or during special occasions. A warm bowl of delicious ash strengthens the bonds within families, as the cook demonstrates their affection toward the family members by spending hours cooking the stew for them, and the consumers greatly expressing their appreciation of the cook in return. With every Iranian gathering with either friends or family, I come to admire Persian traditions even more for the sense of affection, friendship, and family consistently conveyed toward one another. 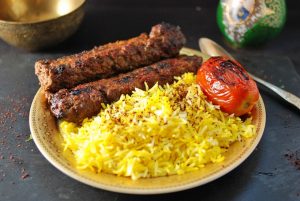 After my one year of living in Atlanta, one fact has been made quite clear: Atlanta is the center of one of the most diverse populations in the United States. This diversity can be seen on Emory’s campus, allowing me to acquire a great number of friends with different ethnic backgrounds. Prior to attending Emory, I had always avoided consuming Indian food due to my intolerance to spice. However, after meeting friends with Indian backgrounds, I finally mustered the courage to visit an Indian restaurant. To my surprise, I greatly enjoyed the dosa I ordered and looked forward to visiting several more Indian restaurants throughout the year. Similarly, I had the opportunity to visit Koreatown and Buford Highway with my new Korean and Chinese friends, where I tried Korean barbecue and ramen for the first time and experienced the unique yet distinct environments of the two cultures. I was also undoubtedly exposed to the hospitable culture of the southern kitchen in Georgia. Furthermore, Atlanta is home to Rumi, one of the best Persian restaurants in the United States. I frequently visited Rumi to not only receive the sensation of a home-cooked meal that I had dearly missed while at Emory, but also to introduce my friends to Persian cuisine. My friends greatly enjoyed the food and were amazed at how nicely the restaurant presented itself and treated its guests, which of course made me proud of my Iranian background. Overall, the variety of ethnic backgrounds in Atlanta initially drew me toward Emory and has ever since allowed me to immerse myself in cultures I had never previously been exposed to. Luckily, I have three years left at Emory to continue meeting diverse groups of people and exploring cuisines from around the world.

One Reply to “Blog #1: The Significance of Food Beyond Taste – Tanya Rajabi”