The foods that are important to me and my family and cultural background are dumplings and Beijing zhajiangmian. Dumpling is one of the most famous and meaningful foods in China, which is a part of Chinese culture and tradition. In some particular festivals, every family makes dumplings together and celebrates. For example, in Chinese New Year, since the color and shape of dumpling are similar to the ancient silver ingots, people think it will bring wealth to the family. And traditionally, when people make dumplings together at New Year’s Eve, they usually hide a coin in one of the dumplings, and the one who finds the coin will have the most fortune in the coming year. Also, since the shape of dumplings is similar to ear, and people’s ear will turn red when suffering cold, then in the winter solstice day, Chinese will have dumplings which symbolizes they will not suffer from cold and hunger in the winter. Zhajiangmian is the special food in Beijing, and has a special history that when Eight-Nation Alliance invaded China and conquered Beijing, The Empress Dowager Cixi, Emperor Guangxu and their retinues were in their trip to Xi’an city and were amazed by the taste of zhajiangmian, then bring the chef who made that zhajiangmian dish to Beijing and palace. Dumplings and zhajiangmian are traditional Chinese food, and are important to me because they represent my home and my culture.

Dumplings and zhajiangmian also have special meaning for me. Every time I leave home for travel, my parents will make dumplings for me, and wish I will have a safe trip, since the filling inside the wrapper symbolizing completeness and completeness. I have been in US for three years, because the New Year Festival is in February, and I can’t celebrate with family in China, so I always make dumplings with my friends on New Year’s Eve. When I was little, my grandmother usually prepares fillings of minced meat and finely-chopped vegetables, my brother and I will wrap fillings in a thin and elastic dough skin, though my dumplings always look ugly. Usually when you have Chinese dumpling for dinner or lunch, you will not have to cook anything else, except for some big occasions. The dumpling itself is good enough for dinner. This is one of the advantage of Chinese dumpling over other foods, so when I always have dumplings in my refrigerator. I grow up in Beijing, and zhajiangmian is definitely one of the most important food in Beijing. The price of zhajiangmian is acceptable to everyone, and you can find zhajiangmina in every corner in Beijing, compared with Beijing roast duck, zhajiangmian is more like a standing dish. The method of making zhajiangmian is simple, just prepare various sliced vegetable, noodles, and fired yellow soybean paste. Noodles also have special meaning in China, since Chinese noodles are usually quite long, which symbolizes longevity. Thus, they are sometimes served when celebrating birthdays for elderly people, wishing them “longevity” of course. And I remembered most of my birthday were served with zhajiangmian. In China, dumplings and noodles are common selection as the last and first meal for hosting, especially those who have traveled a long distance, as in the common idiom “when leaving, eat dumplings; when arriving, eat noodles.”

I know there are a lot of Chinese people in Atlanta, especially in Buford and Duluth. Most Chinese restaurants serve dumplings, but only some serve Beijing zhajiangmian, since it is a dish popular in Beijing and northern area in China. Most Americans only try dumplings in Chinese restaurant but not zhajiangmian, and some people even think it doesn’t look good because of the dark sauce. 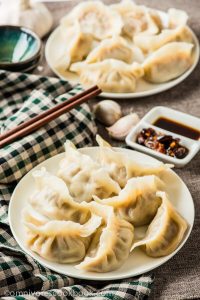 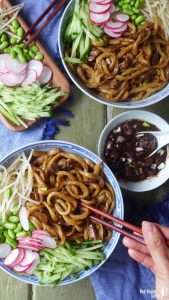 Mix pork, cabbage, 2 tablespoons chives, soy sauce, sesame oil, and ginger in a large bowl until thoroughly combined. Place a dumpling wrapper on a lightly floured work surface and spoon about 1 tablespoon of the filling in the middle. Wet the edge with a little water and crimp together forming small pleats to seal the dumpling. Repeat with remaining dumpling wrappers and filling.

Heat a large pot of water to a boiling, add a small pinch of salt. Then cook the dumplings in batches. Slightly move the dumplings with a large ladle or scoop so they will not sticky to the bottom. Then the water begins to boil again, add around 1/4 cup of cold water. Repeat once. When the dumplings become transparent and expand because of the air inside. Transfer out.

In a bowl, dilute dry yellow soybean paste and sweet bean sauce (or hoisin sauce) with water. Set aside. Heat up oil in a wok (or a frying pan) over a medium high heat. Add star anise, spring onion (the green part) and ginger. Leave to sizzle until fragrant. Stir in pork and rice wine. Cook until the pork becomes pale. Pour in the diluted sauce. Bring it to a boil then leave to simmer for 15-20 minutes. Then boil on a full heat to thicken the sauce to the desired consistency. Stir in the white part of the spring onion.

Blanch beansprouts and green soybeans in boiling water (cucumber and radish are served raw). Take them out then drain. In the same pot, cook noodles. Drain and rinse under cold water for a few seconds.

Place noodles in four serving bowls, stir in the sauce then top with vegetables.

How to Make Chinese Dumplings from Scratch. Omnivore’s Cookbook. https://omnivorescookbook.com/recipes/how-to-make-chinese-dumplings.

One Reply to “The meaning of food to me”