My Family used to share the same meal at a diner more often when I was young; however, as I grow up, my family started to have different dietary restrictions due to my mom’s belief in one’s physical constitution, which resulted in two separate meals served on one dining table. Physical constitution that our family considers is one of the Asian medical treatment.  The food and dietary restrictions are the core part of such treatment. There are 8 physical constitutions, and each has different food that is strongly suggested and avoided.  According to the theory, my mom and two sisters should eat seafood and refrain from eating meat.  My father, brother, and I should eat meat and avoid seafood. Since the chief of our family is my mom, who is a firm believer in such theory, it became less often to share the same meal on one dining table. Instead, two meals were always served for two groups in our family, so it is difficult to define the foods that represent our family. However, there are some foods that we still share regardless of such dietary restrictions and some foods that I loved to share with my family.  The first food that I want to introduce is called Tteokbokki, also known as stir-fried rice cakes. There are different types of Tteokbokki such as soy sauce Tteokbokki, black Tteokbokki, and oil Tteokbokki.  Among those, the most commonly found is chili-paste Tteokbokki.  It is known as a representative Korean street-food eatery and is made of rice cake, fish cake, vegetables, and chili paste.  The second to introduce is Tteokguk is rick cake soup.  This is a traditional Korean food that people usually enjoys in New Year because the food symbolizes getting a year old.  Tteokguk is traditionally made of rice cake, beef or oyster, and eggs.  Last to present is Miyeokguk, a seaweed soup, which is made with seaweed, beef or oyster, and anchovy.  This is the traditional food that Koreans eat on birthdays. 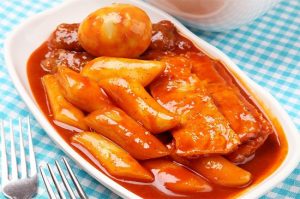 Tteokbokki is the food that misses eating the most when I am abroad.  From a young age, I studied abroad in the United States without my parents.  When I visit Korea during breaks, the first thing I would ask for my mom is to cook Tteokbokki. It also reminds me of spending two years together with my sister in high school.  These two years were the most heartwarming moment of my life.  I depended on her for two years. She was a friend, a sister, and a parent to me. After school, we would cook Tteokbokki at dormitory kitchen since we could not buy Tteokbokki near the school as we used to do in Korea. When I went to school in Korea, my friends and I would always eat Tteokbokki no matter we are full or hungry after school. It was just a relaxing and pleasurable time spending with my friends after school.  Tteokbokki is the food that is full of heartwarming school years’ memories. 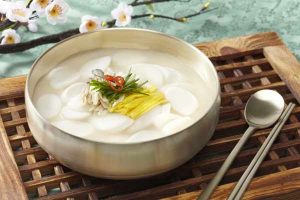 Tteokguk, to some Koreans, is a special meal that people eat on New Years, but to our family, it is a typical breakfast meal that we eat at least twice a week.  The ingredients are easy to find, and it is simple to cook.  Also, it is easy to adjust the dietary restrictions.  After preparing the basic Tteokguk without beef and oyster, my mom would serve Tteokguk with meat on top of the soup and boil again with oyster for 2minutes. This is almost the only food that all of our family members would all be able to eat at the same time. 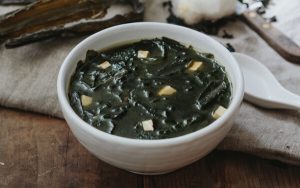 I have only been to Atlanta for one year, but what I find most interesting is developed food culture from different ethnic communities. I have been Chinese and Japanese restaurants only a few times in Atlanta, but I am already in love with a unique spiciness of Chinese cuisine and sophisticated taste of Japanese dish.  Among different ethnic communities in Atlanta, the most I have experienced is Korean community. Since I went to high school with small Korean society, I was surprised how Korean community and restaurants in Atlanta is well developed. The food in Korean restaurants in Atlanta tastes the same as in Korea. Not only the taste but also the diversity of the food is astonishing. The people in the community are also friendly and welcoming. During weekends, I visited Korea town with my friends to distress and shared food and stories. Next year in Atlanta, I want to explore more about other ethnic communities.

One Reply to “Blog 1: What food means to me”