UPDATE 3/25/2021: If you didn’t get a chance to enjoy this program – or if you’d like to watch it again – you can view the recording on YouTube at this link.

Current US Poet Laureate Joy Harjo, the first Native American poet laureate, will read her poems at an event hosted by the Stuart A. Rose Manuscript, Archives, and Rare Book Library on Saturday, March 20, 2021, at 4 p.m. The event celebrates Women’s History Month in March. 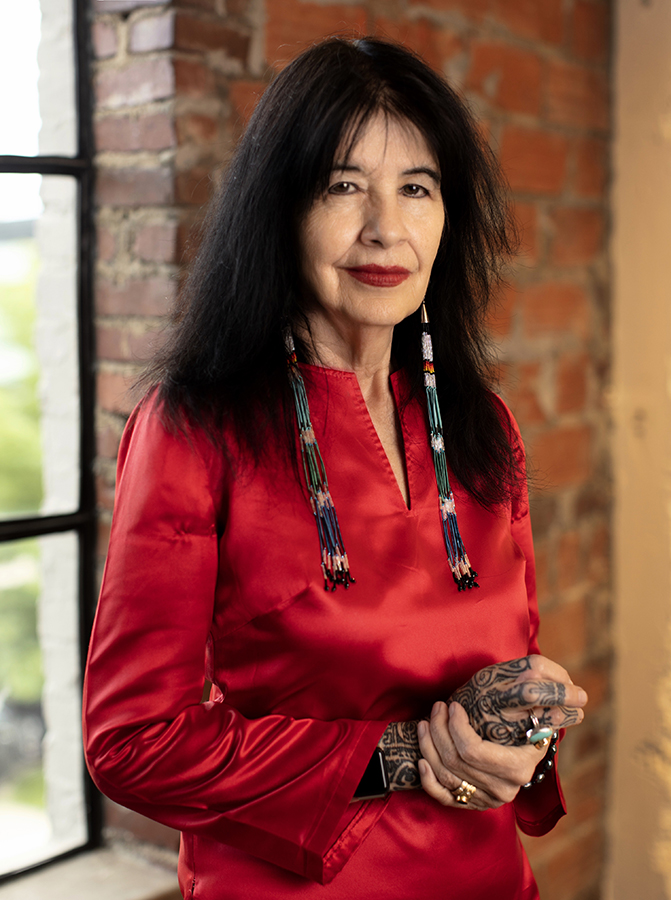 Due to ongoing COVID-19 restrictions, this annual spring Raymond Danowski Poetry Library Reading Series reading, normally a large in-person event, will be held online. Attendees are asked to register here to receive a viewing link prior to the event, which is open to the public at no charge.

Harjo became the 23rd poet laureate of the United States in 2019 and was recently appointed by the Library of Congress to a rare third term, to begin in September 2021. She is an internationally renowned musician, writer, and citizen of the Muscogee (Creek) Nation in Oklahoma.

Emory University was founded in 1836 on the historic lands of the Muscogee (Creek) people, 15 years after the First Treaty of Indian Springs (1821) through which the US government acquired this area of land from the Muscogee Nation. After this treaty, many Muscogee people relocated to Alabama, and were then forcibly removed to present-day Oklahoma on the Trail of Tears in 1836.

She is the author of nine books of poetry, among them “An American Sunrise,” “Conflict Resolution for Holy Beings,” “How We Became Human: New and Selected Poems,” and “She Had Some Horses.” She is also the editor of two anthologies, including the recently released “Living Nations, Living Words: An Anthology of First Peoples Poetry.”

Harjo’s first memoir, “Crazy Brave,” won several awards, including the PEN USA Literary Award for Creative Nonfiction and the American Book Award; she is working on a follow-up memoir.

She is the recipient of the Ruth Lilly Prize for lifetime achievement from the Poetry Foundation, the 2015 Wallace Stevens Award from the Academy of American Poets for proven mastery in the art of poetry, a Guggenheim Fellowship, the William Carlos Williams Award from the Poetry Society of America, and the United States Artist Fellowship. She was inducted into the Oklahoma Writers Hall of Fame in 2014.

Harjo is also the guest poet at the Rose Library’s 21st annual 12th Night Revel fundraiser on Friday, March 19. This online event will also include guests Indigo Girls, Emory president Greg Fenves, and several surprise guest poetry readers to be revealed that evening. This year’s event will be hosted by chief revelers Dr. Carlos del Rio, Distinguished Professor of Medicine in the Division of Infectious Diseases at Emory University School of Medicine, executive associate dean at Emory’s school of medicine at Grady Memorial Hospital, and co-director of the Emory Center for AIDS Research; and Dr. Jeannette Guarner, a pathologist at Emory University Hospital and Professor of Pathology and Laboratory Medicine at Emory University School of Medicine. Individual tickets are $75 and can be purchased at the 12th Night Revel ticket page.