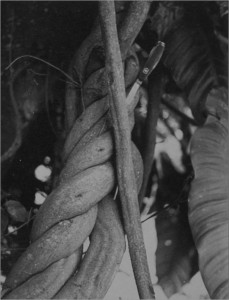 “…the mother of ayahuasca is a snake. As you can see, they have the same shape.”

The giant vine or liana known scientifically as Banisteriopsis caapi/inebrians grows throughout the rainforests of South America (B. caapi) and in lower Central America (B. inebrians, a smaller close relative of B. caapi that gives the same effects). It develops in a spiral fashion; the older and more potent it is, the more it twists and weaves around itself as it hangs snakelike from the trees. Shamans boil it and add a leafy plant, usually Psychotria viridis, to bring out its powerful visionary effects. This brew, known often as ayahuasca or yajé, has an ancient history in the Amerindian tropics, according to the many artworks that include the twisting vine. 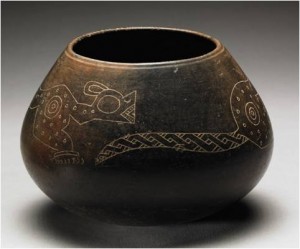 The twisting vine pattern appears both literally and abstractly in an incised Belen-style vessel from Costa Rica. It is most obviously paired with the black jaguar, referring to the animal self of the shaman experienced during trance. In an incised vessel from Costa Rica the vine is incorporated in to the tails of the two running jaguars. It is interesting that jaguars hold their long tails in an S curve and their tail spots (pictured here) may meld into slight stripes, making a visual analogy with the vine.

In a Belen-style elliptical vessel, also from Costa Rica, the jaguar body, legs, and tail are all made up of twisted vine segments. Here the artist has chosen to use both three and two dimensional elements in portraying the jaguar. The head and paws, arranged around the opening of the vessel, are all modeled while the rest of the abstracted body is only incised. The three-dimensional jaguar evokes the terrestrial while the incised elements indicate the spiritual jaguar. This is typical of shamanic art (for similar choices see the Female Shaman as Whale Shark Effigy). 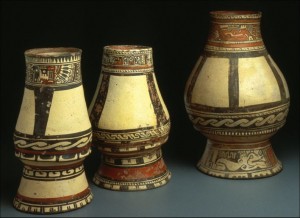 Another Costa Rican style called Pataky polychrome includes more subtle references to the vine. It may seem like a decorative feature, but the twisted pattern on the lower part of these pear-shaped body essentially communicate its helical form.