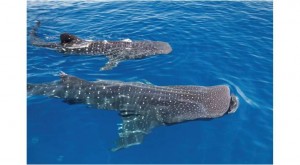 The largest fish in the world is the whale shark (Rhincodon typus), reaching thirty to over forty feet long when fully mature.  Recognizable for their wide blocky head, huge mouth with thousands of tiny serrated teeth, and blanket of white spots on brown, they swim close to the seashore and up estuaries where the water is brackish. Ancient coastal peoples of South America were evidently familiar with this gentle giant, since the whale shark appears to be this woman shaman’s animal self. The females also grow larger than the males, making this animal an appropriate other self for a powerful woman shaman.

From the front the square head and white spots on her torso are obvious clues, as is the jaw-to-jaw mouth full of zigzag teeth painted in brown. It overlaps her modeled human lips, elegantly tying together her two states of being. The wide oval eyes mimic those of the fish as well as the deep ear canals that seemingly were inspired by the holes (“spiracles,” vestigial gills) that appear behind the eyes of whale sharks. The figure’s prominent genitalia –unusually naturalistic for ancient Andean art— may reflect the fact that female whale sharks give birth to as many as 300 young at a time. 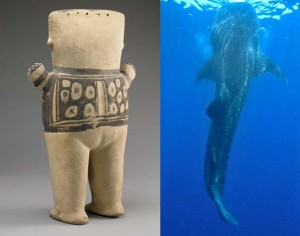 There is a detail of the spotting that is relevant as well: the white line down the effigy’s back visually corresponds to the white outlining of the dorsal fin edge on a whale shark. Dr. Bruce Carlson of the Georgia Aquarium has verified that if seen from directly above, there appears to be such a white line down the animal’s back, though photographs rarely capture the effect. All whale sharks have some white lines among the spots, as well, and certain individuals’ spots form a line down the center of the back.

The effigy’s overall body shape corresponds to that of the whale shark as well, including its streamlined side view, which Dr. Carlson noticed when he first saw the piece. It tapers at the head and widens through the middle, just as the shark’s body does. A final visual correspondence is the flipper-like arms. Granted, extremely short arms are typical of this type of effigy; in this case the short arms dovetail conveniently with the animal spirit’s diagnostic pectoral fins. On a practical note, such truncated limbs allow the effigy to be dressed in actual clothing. 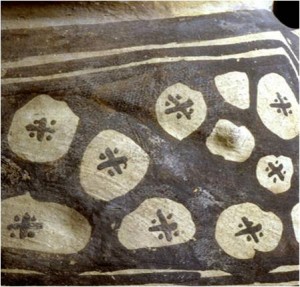 We know that she was dressed originally because in this piece we have the imprinted remains of a textile left on the chest to prove it (visible in the photo). This evidence of real dress is also an important clue to the shamanic interpretation: it means that the painted torso patterns are not meant to represent a shirt, but rather the skin, body, and/or deeper self of the shaman. The painted elements are one with the body, to better signify her “true” animal self from a shamanic perspective.