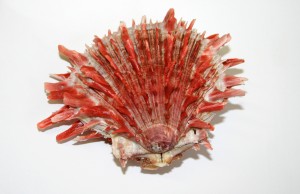 “[The shaman] has to feel an illumination in his body, in the inside of his head or in his brain, something that gleams like fire, that gives him the power to see with closed eyes into the darkness, into the hidden things…”

The spiny oyster (Spondylus princeps), or mullu in the Inka Quechua language,  is a bivalve mollusk whose dull, spiky exterior protects and hides its smooth, orange-red, glossy interior surface. It lives in warm sea waters at depths of up to 50 meters, making it difficult to harvest. Its brilliant orange color, exterior spikes, hinged body, and multiple blue eyes that line the inner edges of the shell are its most characteristic visible features.

Such hidden extra eyes are analogous to shamanic visions and ingesting Spondylus meat during red tide can produce a mild psychotropic experience. Works of art celebrating the Spondylus shell may include meditating human figures, reinforcing a religious interpretation of its use. Vessels may portray the exterior spikes of the Spondylus either realistically, as on the right, or abstracted into regularized, serrated (zig-zag) patterns, as below. 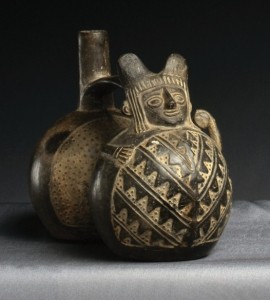 The feminine is a natural association with the Spondylus shell (bivalves echo female anatomy). The red lining color relates to women’s reproductive cycle, as does the red tide which signals when Spondylus becomes entheogenic. Here the woman is the Spondylus, with two projecting spines from her head. The two chambers reflect the two shells as well.

These precious shells are difficult to extract from the rocks in the dark sea waters and yet produce quite small amounts of workable material. These factors, combined with the animal’s entheogenic effects, contributed to the high status of this material throughout the ancient Americas. Possessing and controlling this rare material demonstrated political and social power and prestige.