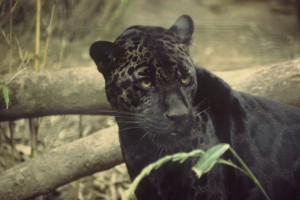 “I became aware of moving through the jungle, the jungle moving aside as I quickly and stealthily, with focus, passed. I was the jaguar.”

Whether with the black, brown, or more familiar tawny pelt, jaguars (Panthera onca) are always identifiable by their black rosettes (a central spot surrounded by others that often meld into irregular, petal-like crescents).  Their rounded ears, light bellies, large crossed canine teeth, and long tails are other characteristic features picked up by this artist to specifically depict the “king of the jungle,” the largest cat on this continent. Because it is so impressive and dangerous, the jaguar is one of the most valued animals for Amerindian shamans to feel themselves becoming during their trances. 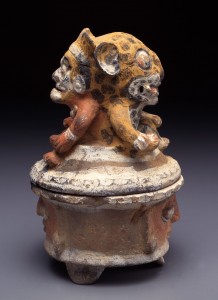