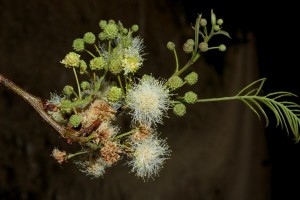 “Other times [the Inka] went into a room; closing it from the inside, they used certain ointments and…lost consciousness. One day later they answered the questions asked of them.  For these consultations and conversations with the devil, they performed countless ceremonies and sacrifices.  The most important one was to get drunk on chicha which had the juice of a certain plant called vilca added to it” 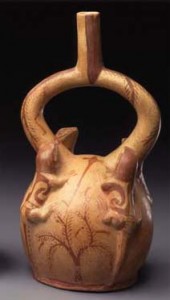 There are over one hundred vision-inducing plants that grow naturally in the Americas, especially in the tropics. One of these is a small fern-like tree (Anadenanthera) in the acacia family, characterized by many narrow green leaves branching at an angle from its limbs. Its distinctive flowers have long radiating spokes with small balls at the ends and long, dark seedpods dangle at intervals. These seedpods can be seen in the Moche spouted vessel from ancient Peru, dangling from the fern-like branches on the body of the vessel.

The dried black seeds can be ground into a powder and absorbed in several ways. Most often its sacred use is as an inhalant. Interestingly, the lizards (Dicodron holmbergi) that live on the tree and eat the seeds can themselves be consumed to achieve the same visionary effects.  The Moche illustrated this connection, adding war clubs and military swirling patterns to the lizards’ torsos. Warriors might have eaten the lizards before battle or, more likely, this refers to spiritual battles that took place among shamans who had eaten the lizards to reach the Other Side. 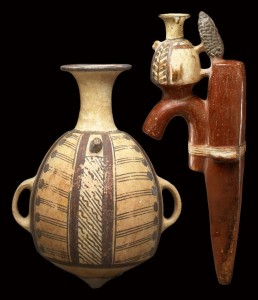 The Inka called this plant vilca and drank it as a powder sometimes added to their maize beer. This combination can be identified in the decoration of high-status beer-related Inka objects. The vessel used to store and serve maize beer (vessel on the left) and the miniature version of it on the rare paccha (ritual watering device, on right) both feature the flower motif with the spokes and the balls.

The use of vilca seems to have persisted into Colonial times, no doubt subversively, if the small fern-like painted tree on the qero (maize beer drinking beaker) is any indication. The Spanish colonists did not approve, as the quote above shows, but nevertheless vividly describe how the Inka saw the snakes and heard the voices that are characteristic of visionary experience. In the rest of the world shamanism tends to die out as the society evolves into a more complex political organization; however, in the indigenous Americas shamanism informs even imperial religious structures. Many Spanish chroniclers describe aspects of Shamanic religious practice well into the Colonial period.