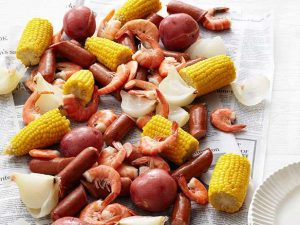 As an Asian-American adopted by American Caucasian parents, I have a very unique experience growing up in the south with relationship to food. Yet, most of the foods that I associate with my family or cultural background are not representational of my personal cultural heritage. My parents grew up across the southeastern states and their taste in food reflects a “home-style” type of cooking made of fresh vegetables, red meats, wheat, and plenty of fat. My family always had Sunday dinner after church and often dinner together in the evenings during the weeknights. My mother was a stay-at-home mom for most my childhood, so I can remember the time spent with her in the kitchen learning to make recipes that she made with her mother, and so on. However, looking back, my relationship with food was always strongly influenced by the places we lived. I grew up in Charleston, South Carolina. My grandparents are from Tampa, Florida and Brunswick, Georgia. These locations have very distinct memories and associations with food as a social experience.

In Charleston, food is usually the best excuse to throw a party. The Charleston Harbor is guaranteed the best place to find fresh shrimp, fish and oysters. A tip from my grandparents that my mother always followed: go down to the docks early in the morning right after the fisherman get in, then buy the seafood by the pound to get it as fresh as possible, better than even the farmer’s markets. In my opinion, the food that embodies the spirit of Charleston would be the Low Country Boil, aka Frogmore Stew, aka Beaufort Stew and oyster roasts. Both great names for dishes and events for the social calendar, these idealize the spring and fall in the city. Low country boils were often held in the late spring, early summer, when it’s warm enough to dine al fresco, but not too hot that humidity ruins the evening. Typically hosted on a patio and backyard, low country boils are made outside on a gas burner in a giant pot filled with white wine, halved lemons, red potatoes, whole or halved ears of corn, sausage, halved Vidalia onions and of course, piling pounds of shrimp, with a little garlic and seasoning. When it’s done boiling, the pot is drained and dumped on a communal table which is lined with newspapers for everyone to share– no plates necessary. The rule is to keep it simple, ears of corn are shucked, but you have to peel your own shrimp, which allows plenty of conversation time in between bites. In the fall, oyster season peaks (during the months that end in “r”) when the water is chilly. The same concepts apply – whole oysters bake in a large pot outside, then dumped on a communal table for people to shuck and enjoy.

The enjoyment from these foods stems from the enjoyment of socialization. Every step of the way, whether its sourcing the shrimp or harvesting the onions from the garden or picking up meat from the market, the chef, my mother, made connections with our family, community, and even the fishermen. The cultural significance to me, though it may not be Asian-influenced, very much feels like home. Just imagining the warm breeze, smells of the Old-Bay seasoning or the crinkling of the newspaper can transport me straight back to Charleston. Gathering with family and friends, walking along the beach around sunset, and eating together at one long table becomes a comforting ritual. Much like Thanksgiving, the food is gives a warmth to a home and the act of gathering makes it feel complete. The aspect of family tradition, after graduations, wedding showers and just celebration create my family’s traditions which motivates me to share it when I have a family of my own.

Some of my family lives in Atlanta, so I’ve traveled here often before starting at Emory. I am also a freelance writer for Atlanta magazine, so we often cover diverse restaurants, events and openings. Particularly, Buford Highway has come to national attention for its diverse range of authentic food from family-owned businesses. This provides both comforts for Atlanta’s international community, but also boosts the region economically as it is its own tourist destination. I’ve visited many restaurants and assisted on the dining coverage for the magazine, but other than dining, I’ve never really engaged with anyone at the restaurants. I am aware of the large push for sustainability and access to fresh food for the low-income areas which can affect ethnic minorities, but I would be interested in learning more on the subject. Other than when I was born and when I went to China at age 5 to pick up my adopted sister from Hunan, I haven’t had much exposure to Chinese food. I love going to Asian restaurants and trying new foods with my friends at Emory who were raised culturally in Asian households, as it’s almost like discovering my culture. I don’t speak Mandarin, but I have learned some through when I visit restaurants and speak with the waiters or waitresses which is very unique way of absorbing the culture. One thing my parents really enjoyed to do was taste different Chinese candy on their visit, so I remember buying pop-rocks candy and tasting new candy almost every day of that vacation. I would love to see if any restaurants or markets sell those locally. It may bring up some more memories or provide a new way to connect with the culture.

The phrase, “you are what you eat” both supports and contradicts my approach to food. When I spend time with my family eating Low Country Boil in Charleston,  I am (or feel very) American like my family. Yet, when I eat Chinese food, especially with Asian friends who were raised in that culture, it becomes drastically less familiar. Though technically I am more like the food (genetically/physically related to the culture), I feel that I am Chinese in that setting.

2 to 3 medium sweet onions, such as Vidalia, peeled and quartered if large

8 ears of corn, cut in half

Add the shrimp, bring the water back to a boil and cook until the shrimp turn pink, about 3 minutes. Drain through a colander; discard the liquid. Serve on newspaper or a platter.

One Reply to “Blog 1: Homestyle”