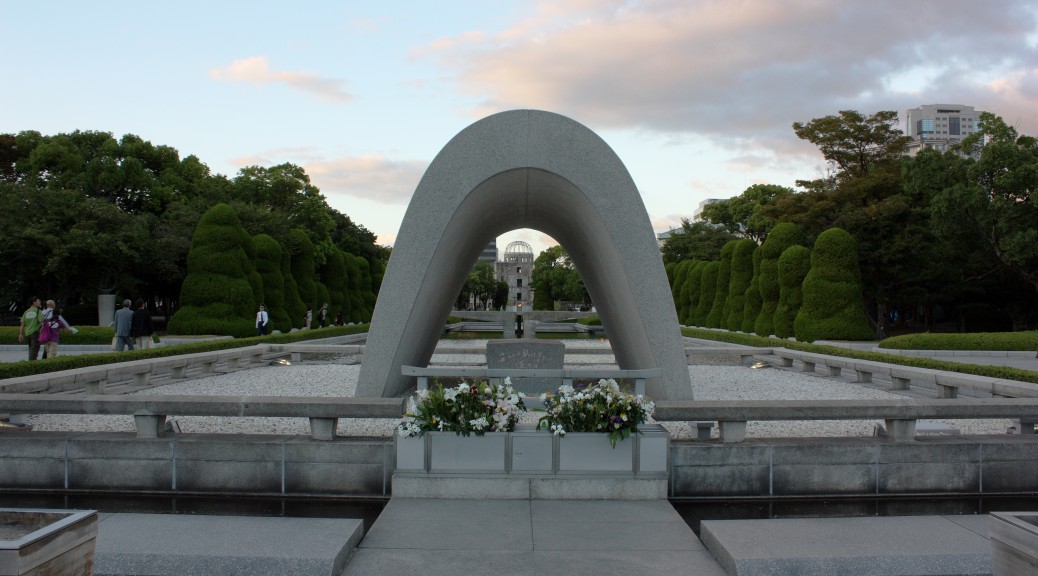 Today we had our first big day in Hiroshima. We shared breakfast at a beloved café—a reunion of sorts for Prof. A—and then returned to the hotel for a seminar. Ready for the day, we set off for West Hiroshima to find the Peace Institute at Hiroshima City University (HCU). There we met with Drs. Bo JACOBS and Ran ZWIGENBERG to discuss the work of the institute, their research, and our questions.

The students rose to the occasion with challenging questions, and we had an energetic and lively discussion that ran for 30 extra minutes without anyone noticing. One of the key points in the discussion covered the notion of “Global Hibakusha.” Hibakusha is a Japanese word used to denote those affected by the bombing (either the bomb explosion or the effects of radiation), and Dr. Jacobs is part of an initiative that explores the ties that bind nuclear test-site communities globally, particularly in communities that are less globally recognized as affected by nuclear development. With Dr. Zwigenberg we discussed the problems of importing and imposing Western interpretive frames on Japanese catastrophic experiences (particularly psychological frames such as trauma theory). Throughout, we discussed how people recover from nuclear catastrophe and what that recovery means.

We traveled directly from HCU to a meeting with Mr. Yasuyoshi KOMIZO, Chairperson of the Hiroshima Peace Culture Foundation (HCPF) and Secretary General of the Mayors for Peace organization. Funny and engaging, Mr. Komizo was a thoroughgoing hit with the group. In addition to being a motivational and inspirational representative for peace-related causes, he brought a long history of diplomatic work to bear on his current endeavors.

He regaled us with stories, telling us about a visit from Caroline Kennedy, who visited Hiroshima as an ambassador on behalf of the United States, and he discussed how taken he was by her because of the sheer power of her attention and caring (“She didn’t care much about make-up,” he said, “but to me she was beautiful”). Overall, his message underscored the importance of being interested, the power of caring, and the impact of fully attending to what survivors and peace advocates say. More than anything, we’ve seen, people want to be heard. And this ground of mutual respect seemed, for Komizo, the key to peaceful relations between nations.

We concluded the day as a group with dinner at Otis!, a Japanese tex-mex vegetarian-friendly bohemian restaurant. While taking in the vintage film footage blaring Michael Jackson performances, we unpacked the day and reveled in the cultural encounter, enjoying our [Japanese] enchiladas and nachos.