United by and born out of a dough made by mixing flour and water. Diversified in its shape, size, thickness and use of ingredients. Propagated by industrialization and globalization. Molded by years of history, cultural influences and people’s imaginations – The noodle is truly a culinary phenomenon. I enjoyed the succinct nature of the first two dictionary definitions introduced to us during class compared to the wordiness of the pasta definition, but felt that all three failed to encapsulate the essence of the Noodle and that they lacked some much needed context. I thus propose the above mentioned description of the Noodle, which is precise and accounts for its background.

Noodles are relished as feijoada in Brazil, spätzle in Germany, ramen, soba and udon in Japan, mixed with spices in Ethiopia and prepared in many other forms throughout the world (I.P.O 19-20). However, the two paramount nations that are almost synonymous with the term noodles are China and Italy. It is a staple food in both these countries and as a result Italy and China are currently some of the leading consumers of this cereal food. What is now enjoyed in every household, due to its healthy and inexpensive nature, was formerly considered a privileged food source. This is evident in Shu Xi’s “Rhapsody on Pasta” which outlines that during the early Han dynasty ‘Bing’ was exclusively eaten as a snack food by emperors in China (Knechtges 448). Similarly, in Italy, as noted in the “Encyclopedia of Pasta”, pasta was previously reserved for the richer members of society who could afford better ingredients (De Vita 2). The journey of Noodles and pasta, transitioning from a limited consumer base to becoming a household item, parallels each other. It was only after the invention of new drying techniques in Italy and rotary mills in China that this food became a principal food source for these societies. Noodles evolved from a homemade luxury item to an affordable machine made entity. These industrial-economic changes are just one of the many parameters by which noodles have developed over the years. Noodles thus have an ever evolving nature embodied by its various shapes, methods of preparation, complimentary sauces, economic status etc.

Noodles originated in the early Han dynasty in China and since then they have become deeply intertwined with the health, culture, traditions, superstitions and folklore of Chinese natives. Some noodles have stories associated with them which elevate them from being merely a part of one’s diet to dishes that represent profound customary meanings. As a consequence, legends linked to them have translated into everlasting Chinese traditions. Seafood noodles are made to ease the pain of ailing individuals, Qishan minced noodles are prepared by parents to seek success and fame for their children and Guangxi noodles are enjoyed when uniting with old friends. In China food is also used as a means of celebration and festivity. Unique plates of food are prepared to celebrate significant occasions and festivals. The occasions of marriage and moving into a new house are commemorated by eating noodles with gravy (Na Zhang 210).  Birthdays are celebrated by eating lengthy strands of longevity noodles, all party goers place the longest noodle from their plates into the bowl of the person being celebrated, which symbolize a long and wholesome life (The Story of Staple Food). Chinese food is further linked to its medicinal properties and noodles are a healthy energy providing food. Moreover, noodles are consumed with nutritious vegetables, gravies and proteins which make them a favored meal choice and contribute to its widespread intake (Na Zhang 212). It is due to these traditional practices and celebratory associations along with its nutritional values that noodles have acquired such a distinctive place in Chinas history and in the hearts of the Chinese people.

The origin of Pasta in Italy is a highly debated topic. While some believe that Marco Polo brought noodles back from China, which were then adapted into the Italian pasta, others think that pasta already existed during the Roman-Etruscan era. Although Italians may be split in their opinions relating to the origin of the pasta they are unified in their view of pasta being a fundamental pillar in their regional and culinary history. ‘Nothing says Italy like its food, and nothing says Italian food like pasta.’ (Justin Demetri) Pasta in a way contributes to Italy’s identity as a country, moreover it also contributes to Italy’s regional identities. Italy is a country made up of many unified provinces, each section was shaped and transformed by different factors such as its topography, its administrative occupations and varying climate conditions. The culmination of all these influences resulted in distinctive pasta dishes coming up in different parts of the country (Latini 158-159). These dishes thus represent the history of their regions and have become a symbol of their individualities much like the lighthouses we discussed in class. After the mechanization of the industry pasta became easily affordable and individuals of all classes had access to it. Furthermore, the health benefits of pasta such as prevention of chronic diseases, its satiating nature, low glycemic content, etc. caused more and more individuals to adopt this plant based product into their diets (I.P.O). The economic cost, nutritional profits and symbolic significance of pasta is what makes pasta such an integral part of Italy’s food culture. 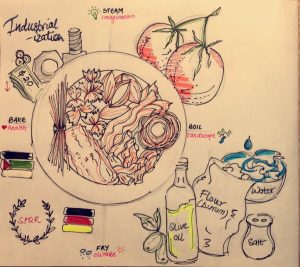 I believe that pasta is only truly recognized or defined if seen in the context of factors such as its varying shapes, regional differences, underlying climatic conditions and varying landscapes, diversity in preparation and accompanying ingredients, foreign and cultural influences, primary ingredients, industrialization, economic value and health benefits. The pasta we get on a plate is merely an end product of this journey and in order to rightfully understand the significance of pasta we have to understand its history.

One Reply to “Blog Post 2-The Historical significance of Noodles”