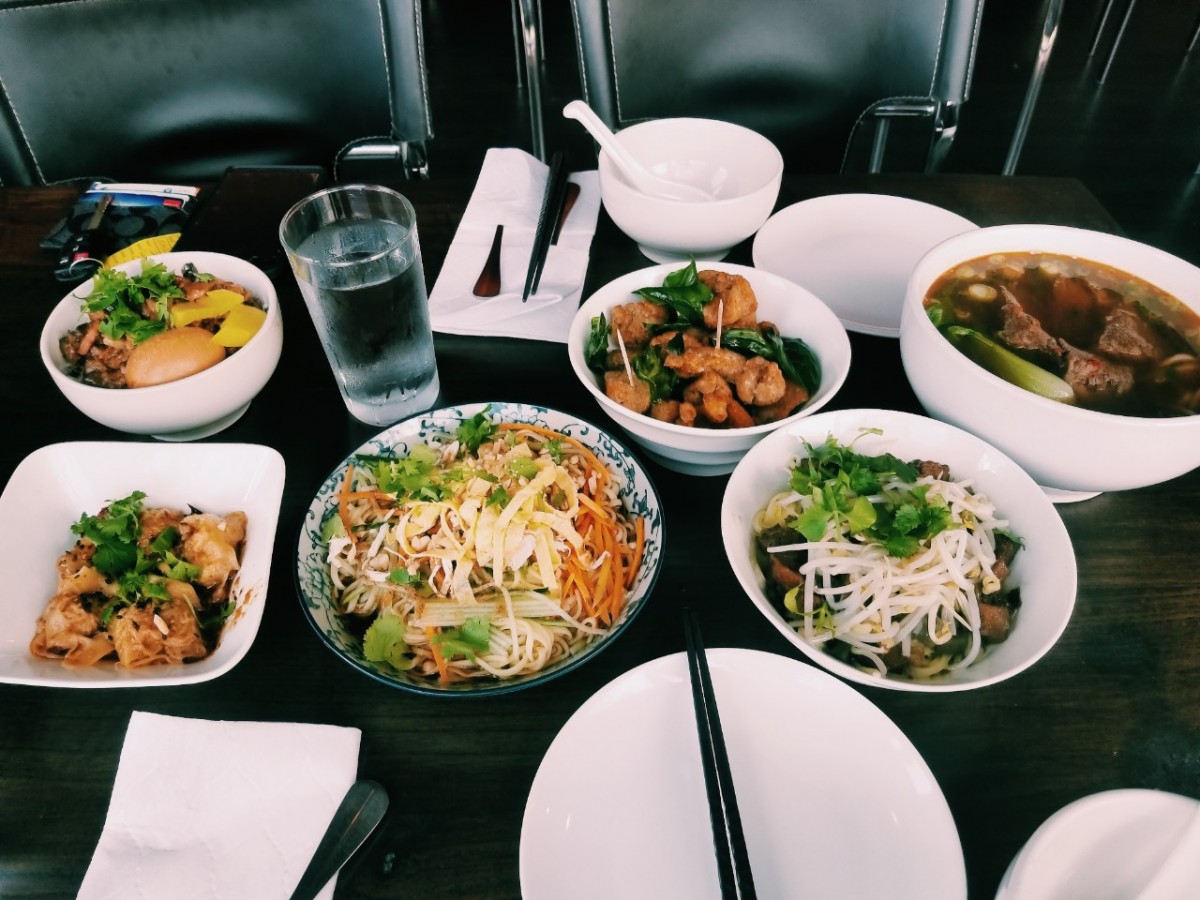 I had the pleasure of interviewing Andy Chen, a chef and restaurant owner of Ah-Ma’s Taiwanese Kitchen in Midtown Atlanta. The restaurant has been around since 2014; Taiwanese-American chefs have been pushing the boundaries of the cuisine in incredibly compelling ways. Born and raised in Alabama, Andy shares his story of being raised in the South and tying back to his Taiwanese roots, what his restaurant’s cultural DNA is, and how that DNA is dissolved in his noodle dishes.

The full interview can be viewed here.

2. What is your background?

3. Did you pick up cooking from your father?

4. Tell me about how Ah-ma’s Taiwanese Kitchen got started.

5. What made you choose metro-Atlanta as the location of your restaurant? What did you aim to achieve, and what were your reasons?

6. What are your top-selling dishes?

7. What is your restaurant’s cultural DNA?

8. How is the cultural DNA manifested in your noodle dishes?

9. How have noodles influenced you? What is your philosophy behind your food?

10. What’s next for Ah-ma’s Taiwanese Kitchen?

11. What is the process of making the bund from scratch? What inspires you to put in so much work?

Understanding Taiwan’s food culture begins with tracking the evolution of its society. Historically, Taiwan was ruled by a succession of five colonial regimes from 1624 to 1945; occupation by the Spanish, Dutch, and Japanese ensued over the centuries. Today, the island’s international status is uniquely ambiguous: Taiwan functions as an independent democracy but referenced as a territory of China. “We are what we eat” — similar to its intricate history, Taiwan’s food culture is somewhat complicated. Based on Fujian’s Weinan food culture,  it combines the characteristics of food culture around mainland China to form a colorful food culture. A notable Japanese influence also exists due to the period when Taiwan was under Japanese rule.

So here’s a million dollar question: How does a Taiwanese-American chef born in Alabama and raised in Atlanta approach the American palate? In recent years, Asian-American chefs have been taking over the food scene celebrating their multi-ethnic mastery of bold flavors and daring cooking techniques. The details of their biographies are different, but the sense of duality is shared. When asked about his background, Andy answered, “I did not just grow up Taiwanese. I grew up American as well.” Three and half years of planning went into Ah-Ma’s Taiwanese Kitchen; for two years, Andy and his brother were set on a crêpes business but scraped everything because “something did not feel right.”

The primary challenge was to reconnect with the Taiwanese culture while making the dishes approachable for the Americans. Cross-cultural culinary mash-ups have come a long way, but authenticity lacks in some restaurants; Ah-Ma’s may seem strictly traditional, and yet there are hints of the South. What is the common denominator of the Southern soul food and Taiwanese food? Answer: Noodles and Baos. In the South, we have Mac and Cheese. We also have southern BBQ sandwiches. “It is easy to make people like noodles,” Andy said.

Noodles are omnipresent; people around the world enjoy noodles, and it is familiar. Noodles are also versatile; noodles can be served as a stir-fried family-sized dish, but also as an individual noodle soup. Beef noodle soup is the quintessential Taiwanese comfort food and widely considered to be Taiwan’s national dish. Each bowl has chunks of slow-cooked flank steak, noodles, veggies, and a rich broth. 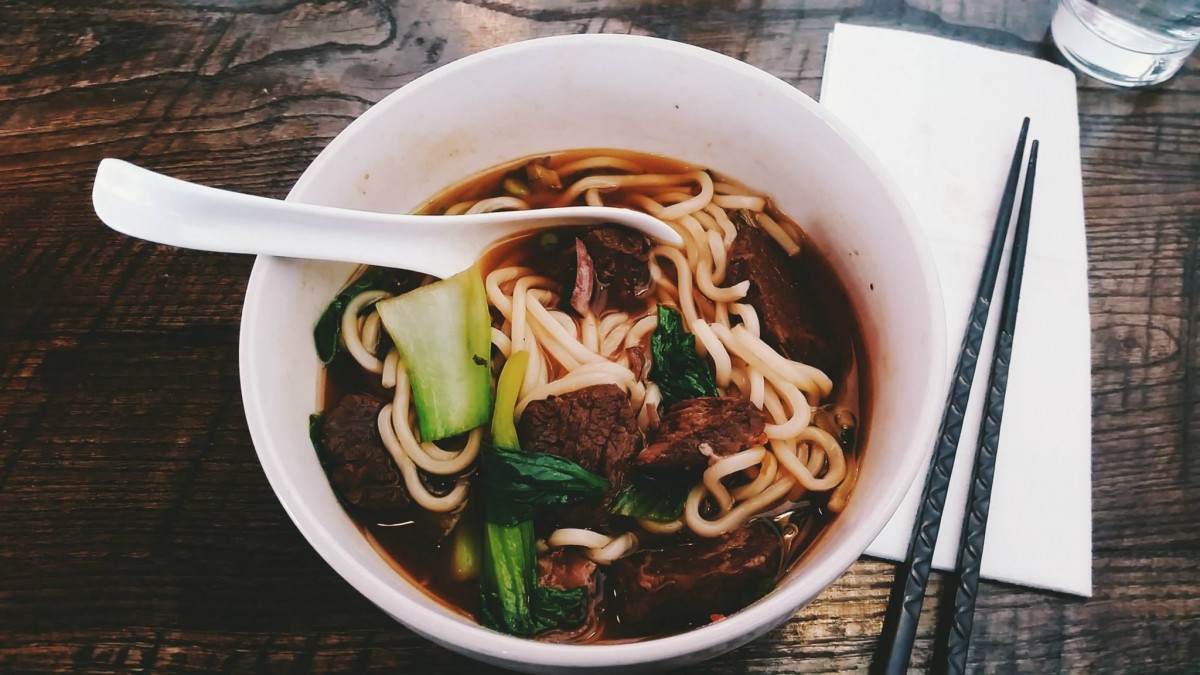 Noodles set the tone for homely, comfort food. Similarly, Baos bring in resemblance to burgers. As an ethnic restaurant operating in the middle of metro-Atlanta, finding common ground with American culture is important. Ah-Ma’s top-selling ‘Dirty Bird Bao’ combines the southern element of fried chicken, mayo, and pickles with house-made Baos. Therefore, noodle at Ah-Ma’s is a gateway to the ethnic dishes, one that brings in familiarity to the American palate, but stays true to its roots.

While interviewing Andy, his food philosophy resonated with me. “Here, we focus on balancing the flavors. I think how one seasons the food is related to one’s lifestyle. Balance.” His answer was insightful and convincing — we are what we eat. Modern Taiwanese food melds indigenous and imported flavors strongly influenced by the food of mainland China and Japan but with a flavor identity all its own. Balancing the different layers of flavor is part of realizing Ah-Ma’s cultural DNA. Noodles are not seasoned strongly because it needs to be harmonious with the broth and beef. No single ingredient sticks out too much. Baos, similarly, are made in-house because Andy felt that outsourced Baos broke the balance of flavors. For Ah-Ma’s, balance is their secret of success. Serving both street food and classic home dishes, the harmony of dishes is essential. Noodles allow Ah-Ma’s to express the balance and harmony — from small eats to classic home dish, noodles act as a template to introduce all the different flavors. Noodle also represents memories tied to the mother country.

Andy expresses an identity arising out of his multi-ethnic upbringing; noodles are his Silk Road to interlocking culinary traditions while staying true to the roots. His restaurant in the middle of Atlanta is symbolic of one way in which Asian American identity can be found outside of highly racialized binaries. Because you know what,  who doesn’t love a bowl of ugly delicious noodles?