In recent years, I notice that there is a very popular restaurant called Youda Noodle Restaurant in my hometown– Yixing, and people have to wait for over one hour on weekends at lunch time to get noodles there. This noodle restaurant is famous for noodles in pickled cabbage and fish pot, which is a novel noodle dish I never had before. Pickled cabbage and fish pot is a Chongqing style dish and it has been popular in China since 1990s. The main ingredients for this dish is grass carp and pickled cabbage. When they are stewed together, the dish has both spicy and sour flavors. It is a dish people normally have for lunch or dinner and it hardly has any relation to noodles. I immediately got interested in this noodle dish when I first heard it, and I was also very curious how would such a new combination taste. Therefore, I decided to interview the owner of Youda Noodle Restaurant. 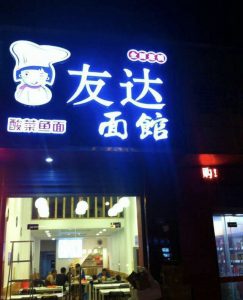 Youda Noodle Restaurant is a chain noodle restaurant in China and my interviewee – Miss Luo – opened this restaurant in Yixing in early 2013. In her mind, noodle is very significant in Chinese culture, and noodles in different areas manifest the local culture. The noodle she had most often is Jiangsu style noodle and it could remind her the taste of home every time she had it. Noodles influence her culturally in the way that she gets more familiar with the local culture. Miss Luo found the combination of fish pot and noodles is very innovative and she believed that such a noodle restaurant would be lucrative. Therefore, she decided to join Youda chain Noodle Restaurant and open the first one in Yixing. During the interview, she introduced the noodle in pickled cabbage and fish pot in details and compared it to traditional Jiangsu style noodles. The noodle itself has no difference from traditional noodles – noodles immersed in soda water used in both. The only difference is that pickled cabbage and fish pot will never be a side dish in traditional Jiangsu style noodle. Traditionally, people in Jiangsu Province have noodles for breakfast or as a staple food supplemented with other dishes for dinner. A bowl of noodle in pickled cabbage and fish pot is too much for breakfast and too less for dinner.

Influence of Social Changes on Noodle Dishes and Dietary Habits

The noodles in pickled cabbage and fish pot is a fusion of Chongqing style dish and Jiangsu style noodles, and this noodle dish itself manifest the influences of social changes in China on noodle dishes. The first Youda noodle restaurant is opened in Nanjing, while the interesting fact is that pickled cabbage and fish pot is not a typical Jiangsu style dish but a famous dish in Chongqing, which is a city 1500 miles away from Nanjing. The spread of food dish over such a long distance is the result of modern technology. Due to the advanced public transportation in China such as the high-speed railway, people are able to move around and there is an increase in the immigration population. As the result of the increase population mobilization, food, as a carrier of local culture, spread to other areas over time.

Besides, people’s diet also changes with respect to social changes. Initially, Miss Luo changed the recipe of the noodle in pickled cabbage and fish pot according to the local cuisine in Yixing. Little or no pepper is used in the local cuisine and local people favor the sweet flavor. Therefore, Miss Luo made her noodle dish less spicy than the original taste and add more sugar. In recent years, as the Sichuan and Chongqing style food gets highly popular in Yixing, people get used to the spicy taste and find it more delicious than plain food. As a result, Miss Luo altered the recipe again and added more pepper and spice this time. In all, social changes in China, especially the advancement of modern technology, change people’s diet and lead to alters in the noodle dish recipe.

Immersion of Other cultures into the Noodles

The modern technology makes communication possible oversea and globalization is an unavoidable trend. Thus, people have more opportunities to keep in touch with other cultures, and noodles in pickled cabbage and fish pot is influenced by them.  No matter where noodles come from, the side dish people can add to noodles are similar across the country, such as ribs, animals’ some internal organs and vegetables. Despite these traditional side dishes, some food from other cultures, such as bacon, luncheon meat and rice cake with cheese, can also be added to noodles in Youda Noodle Restaurant. After people get more touch with other cultures, they have wider range for food choice and there is a change in their diet. Miss Luo figured out a way to integrate food from other cultures into noodles she served. She expanded the range of side dishes and people now can have exotic food such as bacon in their noodles. She believed that there is no conflict between Chinese culture and other cultures. While we maintain the Chinese culture, we can still learn and absorb some useful points from other cultures.

In a conclusion, noodle as a carrier of local culture in China is very significant to my interviewee – Miss Luo. Noodles could remind her of the taste of home and help her be more familiar with local culture. She serves a special noodle dish in her restaurant, which is a fusion of different cuisine. This noodle dish itself could show how social changes influence noodles. Also, changes in its recipe over time manifest the influence of social changes in people’s diet. At last, Miss Luo integrates other cultures into her noodles under the trend of globalization.

Q2: Why would you like to serve this kind of noodle in your restaurant?

Q3: What do you think is the traditional Chinese noodle and what is the cultural significance of noodles in China? How do noodles influence you culturally?

Q4: Could you please introduce what kind of noodle you serve in your restaurant?

Q5: What are some differences between traditional Chinese noodles and noodles your serve?

Q6: Actually, there are many noodle restaurants serving noodles in pickled cabbage and fish pot. What makes the noodle in your restaurant different from others?

Q8:  In your opinion, what’s the key factor of American food, and how does it different from Chinese food?

Q9: How is western culture manifested in your noodles?

Q10: How do you think about the question whether restaurants should cook noodles in traditional Chinese style or make noodles Americanized? 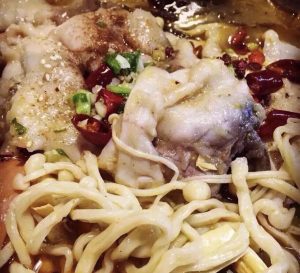 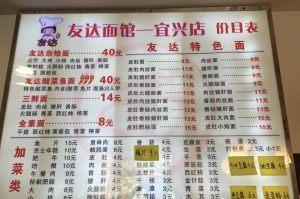