The parent rocks surrounding Lake Chatuge, which are metamorphic schists and gneisses, were originally sedimentary rocks made of 2.8 billion year old sand. These sedimentary rocks began metamorphosing sometime between 1.5 and 1 billion years ago during the formation and rifting of the supercontinent Rodinia, and continued metamorphosing 440 million years ago during the collision of a volcanic island arc with the eastern edge of North America.

The most extensively exposed parent rock around Lake Chatuge is a well-banded biotite gneiss. This unit underlies most of Lake Chatuge, and the unit has good exposures on the shoreline. Outcrops are gray, well-banded (with bands less than 5 mm thick), with reddish-brown anhedral garnet porphyroblasts, and weather into a reddish-brown saprolite. We did not encounter any true outcrops around the Chatuge Dam, but the shorelines around the dam were lined with heavy riprap. The riprap was largely composed of biotite gneiss, which is believed by the author to be the aforementioned biotite gneiss parent.

There is a band of ultramafic rocks called the Lake Chatuge Complex that extends from the southwestern to northeastern corners of the Lake Chatuge area. An ultramafic rock is one whose mineral composition is dominated by dark-colored minerals concentrated close to the core of the earth. Because mafic minerals are located so deep beneath the earth’s surface, a predominately mafic rock comes from spreading centers or deep underwater volcanos. The Lake Chatuge Complex is one of the many instances in the southern Appalachians were a chunk of igneous rock from deep in the ocean was subducted and shoved uncomformably between an assemblage of light-colored, less dense continent-derived rock (Kolsrud and others, 2001).

The only quartzite deposit of potential economic significance in the Lake Chatuge complex is a steeply dipping lens-shaped body that outcrops on the top of Bell Mountain. The body is 500 feet wide, 1,600 feet long, and has an unknown depth. The color ranges from pure white to pink to yellow.

The genus trillium includes a wide variety of three-leafed, short plants with flowers at the center. (Wade, McDowell, Beckgam, Crisafulli, & Pennisi 2014). In North Georgia, a couple of examples of these plants include Trillium cuneatum or Sweet Betsy and Trillium luteum or Yellow Wakerobin (Wade et al. 2014). Both of these flowers grow in moist, hardwood forests with soil rich in organic matter, typically in floodplains (Wade et al. 2014). For reference, this is the description of T. cuneatum Wade et al. (2014) provide on page 140:

[The plant features] three large oval leaves, 6 inches long and 4 inches wide, [which] are arranged in a whorl at the top of stalks rising 3 to 12 inches above the ground. The leaves are sessile and mottled gray-green.

Given that they are relatively similar, they will both be referred to as “trillium” from this point on.

The reason trillium is being discussed in the context of Bell Mountain is that the plants were found growing on the slope of the mountain alongside the road. This is unusual, given that there were no streams nearby. Furthermore, Bell Mountain has an exceptionally steep slope. If this is the case, how do the conditions of Bell Mountain mimic a floodplain?

It is possible that trillium can grow here because of the high moisture level, overland flow, thick layer of leaf litter. During the day of research, it was observed that Bell Mountain was very foggy. This is likely the case after rain events in general, as was noted. The general amount of moisture in the air contributes to trillium’s ability to grow on the mountain slope.

The overland flow and leaf litter work in conjunction with one another to provide rich, wet soil for the plants to grow in. During and after any rain, the large layer of leaf litter will do an excellent job of capturing the vast majority of the overland flow. In turn, there is such a large amount of overland flow due to the steep slope—the land is not flat enough for the water to pool in any depressions.

Bell Mountain, known as Bell Knob on U.S. Geological Survey topological maps, is a 3,420 foot mountain in Hiawassee Mountain that overlooks Lake Chatuge and the impounded Hiawassee River. Upon viewing it from a distance, Bell Mountain’s top is curved out like a large sliver of it was scooped away. This can be explained for: in the 1960’s, three men hailing from Murphy, North Carolina–namely, Grover C. Mauney, Walter Mauney, and Dr. William A. Hoover–started the Hiawassee Stone Co., with the intentions of mining the top of Bell Mountain for commercial quartzite and silica. Even though Bell Mountain poses a sizable erosion danger to Lake Chatuge below, the stone company permanently damaged the top of the mountain by gouging out its crest. However, in the very next year after the start of their company, a University of Georgia professor conduced a Department of Commerce study for the local region and concluded in the study that “a market does not exist for the Bell Mountain silica.” Given this poor economic planning, the Hiawassee Stone Company obviously did not last long. However, the dynamited section of the Bell Mountain crest can still be seen today, and from miles away. The human alteration to the top of the mountain also heightened water quality issues in the local region.

The ownership of Bell Mountain, like the road leading up to its peak, is convoluted and recently switched again. Bell Mountain was owned by the Georgia Baptist Association Inc., until 1971 when Atlanta advertising executive and Young Harris resident Hal Herrin bought it for $60,000. Herrin bought the land lot for the purposes of preservation, given its exploitation by the Hiawassee Stone Co., in the hands of the Georgia Baptist Association. However, when Bell Mountain was in Herrin’s hands, the mountain face was deeply disturbed by extensive off-road driving. Most recently in 2016, the mountain was gifted by the Hal Herrin Estate to Towns County. In dealing with the deep off-roading troughs, the then-Towns County, Bill Kendall, announced a $150,000 budget to build a paved road leading up to the mountain and a wooden observatory deck for safe 360′ views of the region.

Today, vehicles can now be driven up the face of the mountain on a well-paved road and hikers can challenge themselves post steep hike up the mountain to climb the observatory deck for priceless views of the Hiawassee Lakes region. Another notable feature on the top of the mountain is the extensive graffiti on rock faces, a tradition that apparently was started 20-30 years ago by locals and is a topic of extensive debate regarding its value.

Chatuge Dam, named after a former 18th century Cherokee settlement once situated near the dam site, is one of three dams owned by the Tennessee Valley Authority (TVA). The TVA was established in the aftermath of the Great Depression in 1933 to provide flood mitigation, electricity generation, and economic development amongst many other purposes to the Tennessee Valley region. Chatuge Dam, which straddles both Tennessee and Northeast Georgia, is the highest of the three dams, impounding the 7,000 acre Lake Chatuge. 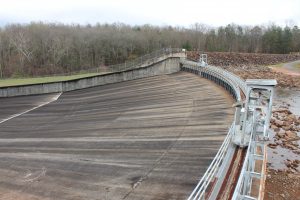 Originally, the dam was built to mitigate flooding in towns down from the lake. However, like many other TVA developments, the dam was outfitted with a small hydropower output in the 1950s. The hydropower project was actually authorized in the early 1940s in order to meet emergency electricity demand in the wake of World War II. The town of Hiawassee is located just south of the dam, and the Georgia border of the dam includes the Chattahoochee National Forest. 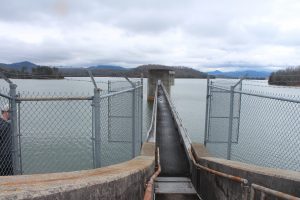 The dam itself was constructed in a “ski jump” spillway style out of earth and rock. The spillway boasts 50 bays with a total discharge of 11,500 cubic feet per second, with a flood storage of over 132 miles of shoreline. The “ski jump” spillway is 44 meters high and 2,850 feet wide. The entire style was kept relatively simple given the short timeline imposed by wartime needs.