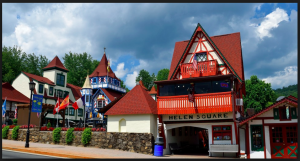 Helen is a small, Alpine-styled town in the heart of Georgia’s Blue Ridge Mountains. While similar to Dahlonega in that Helen’s downtown area is located relatively low topographically to its surroundings, Helen’s topography is much steeper, characteristic of its more northern mountainesque landscape. The core of the towns development is in the Chattahoochee River valley. On the topographic map below, the orange highlighted region follows the core of the towns anthropocentric development. This development corresponds to the relatively flatter terrain of the valley. Following this settlement pattern, Robertstown just northwest of Helen, is also located in a valley region were the Chattahoochee River meets Smith Creek. Logistically such valley regions are ideal for human settlement as the mountain slopes provide moderate protection from harsh winds, and the central river provides fresh water generating a linear pattern of development. 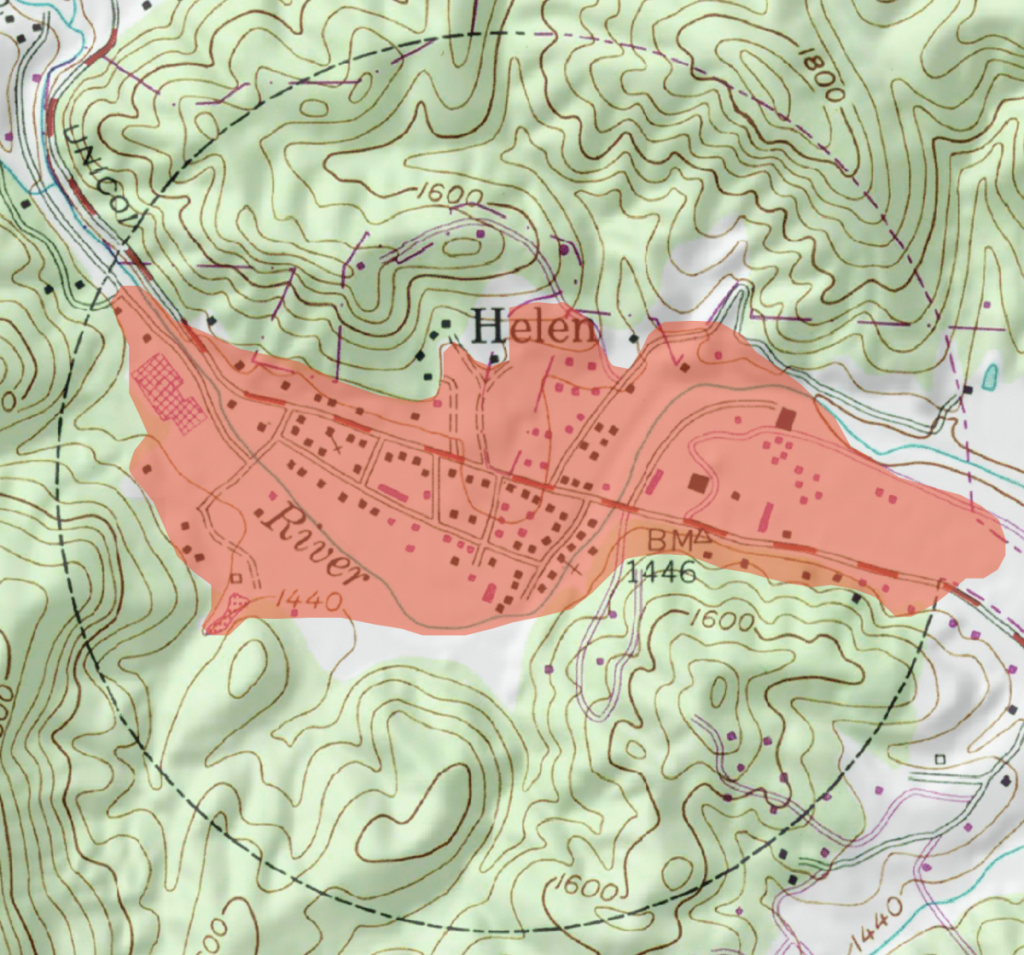 The downtown area of Helen is stylistically reductive to say the least. Faced with an economic crisis following the end of the local logging economy, the town decided to capitalize on its geography to draw in tourists. Catering to those with an affinity for the derivative, the town implemented strict zoning laws at the end of the 1960’s to regulate urban development and architectural style. While such laws have created the Bavarian-style village that exists today the town lacks an authentic, culturally historied identity, yet their largely tourism based economy has thrived.

Once an economically depressed town, the townspeople in the late 1960s turned the once timber/lumber focused town into a Bavarian village, which is now the third most popular destination in Georgia, next to Atlanta and Savannah. Helen sits on the headwaters of the Chattahoochee River, along the edge of the Nacoochee Valley in White County. The area of Helen featured a myriad amount of virgin hardwood trees, a detail noticed by the Byrd-Matthews Corporation, a timber company which built a large sawmill in the town in 1910. The sawmill saw great success up until the Great Depression, at which point most of the timber had already been cut and processed. The town was essentially abandoned, and a ghost-town by the 1950s/60s. The Bavarian style came about in 1968, when a group of businessmen seeking the commerce of the those traveling to the mountains and waterfalls consulted a John Kollock. Kollock, a known regional artist stationed in Clarkesville, was inspired by his 1950s military service in southern Germany, and decided to model the new and improved Helen after his memories. Featuring buildings with chalet façades and red roofs, sales clerks who still wear lederhosen and dirndls, and several restaurants that still serve wiener schnitzel and sauerbraten, the business idea’s success is seen still today, as Helen sees over 1.5 million tourists yearly who spend upwards of $100 million annually in White County. In regards to tourism and activities, Helen is a town which has thrived and prospered. The town features genuine weinerschneitzel and German-cuisine themed restaurants, numerous specialty and gift shops, and one of Georgia’s oldest wineries. Its natural attractions are not lacking either, as the Anna Ruby Falls, Unicoi State Park, and Dukes Creek are all relatively nearby, as well as its own Chattahoochee River, which flows through the town itself, attracting numerous tubers and fishermen yearly. The town’s most popular events by far however are its three month long Oktoberfest (starting in September and ending in November) and the annual hot-air balloon race.

Dukes Creek is a tributary creek and sub-watershed a part of the Upper Chattahoochee River Basin, and is located in White County, Georgia. A rather flat landscape which becomes gorgy, and draining an area of about 22 square miles, Dukes Creek is an area which contains a lot of exposed rock and Dukes Creek Falls, which is actually Davis Creek and falls directly into Dukes. The area near the falls is rather treacherous and arduous to navigate, so access becomes limited at a certain point (or at your own discretion). The Creek is 25-feet wide, has swift water, and is surrounded by white pine-hemlock. Dukes Creek’s botanical features include Carex ruthii (Ruth’s sedge) and Juncus gymnocarpus (naked fruit rush). There are the Dukes Creeks mines, which were established when gold was discovered in the valley along the creek.

The Upper Chattahoochee is a sub-basin of the larger ACF River Basin (Apalachicola – Chattahoochee – Flint River Basin). It flows southwest to the confluence of the Chattahoochee River with Peachtree Creek. Covering 1,823 square miles, when combined with the Middle Chattahoochee River it is the largest river basin within the Metro Water District. All of the tributaries within this basin are free-flowing, and its flow is regulated primarily via Buford Dam. This basin is the primary drinking water supply source for the Metro Water District, distributing water to all/parts of eight District counties, including Cobb, DeKalb, Fulton and Gwinnett. The rock commonly found in the surrounding area of the Upper Chattahoochee is rock overlain with deposits of weathered, unconsolidated regolith, these deposits being thickest in valleys. Four soil associations describe the soil types in the Upper Chattahoochee River Subbasin best: Cecil-Madison-Pacolet, Madison-Davidson-Pacolet, Riverview-Chewacla-Cartecay and the “urban” soils that start in north Fulton County.

Soils which were not present, yet should be mentioned are urban soils:

During our field research, we encountered a large number of campground sites littered throughout the surrounding areas. Unfortunately, said campgrounds were quite literally littered, unkempt, and dirty – there were numerous pieces of trash throughout all the campsites we saw, as well as bottles and pieces of broken glass on the ground. With more care and caution, these campgrounds could be made more valuable areas of natural interaction, though this will be dependent on our effort as human beings with a responsibility to the environment to make it so. Regardless, the sites we visited were full of rich ecology and intriguing geology which I wish we could’ve explored more intensively.