While Dahlonega is currently nestled in the low-relief foothills of the rolling Blue Ridge mountains, the Dahlonega gold deposits at the Crisson Gold Mines and Consolidated Gold Mines remind us of a time in earth history when the Eastern side of North America was constantly subject to the colossal forces of tectonic collision.

Around 540 million years ago (about 290 million years before the first dinosaurs), a volcanic island arc chain formed outboard of what is now the eastern United States. Gold was deposited alongside island arc basalts between cracks of the ancient seafloor. Then, changes in plate tectonics shoved the entire ocean floor, and eventually the volcanic island arc, underneath the southeastern edge of North America. During this period of intense metamorphism (which was caused by the collision of North America and the island arc), the volcanic gold deposits were reorganized and concentrated into the thin, stringy veins of quartzite that are found around Dahlonega today.

This interpretation of the history of Dahlonega gold is based on comprehensive evidence from the rock record. The stratigraphy (where layers of rocks are found relative to when they were deposited and what other rocks surround them), chemistry, and physical characteristics of the rocks in and around Dahlonega all record the formation and filling of a back-arc basin during the Taconic orogeny (German 2013; Settles, Hatcher, and Bream 2002; Stone, 2012).

Located in the foothills of the Blue Ridge Mountains downtown Dahlonega is nestled by Crown Mountain from the southwest to southeast, Happy Hollow Hills northwest, and elevated terrain surrounding Lake Zwerner (also known as Ward Creek) to the northeast. Consequently, downtown Dahlonega sits relatively low to surroundings in a valley-like environment. However, the two most important historic buildings downtown are both on elevated terrain relative to the sites broader topographical depression (topo Map below highlights this depression in pink). The two buildings are the historic Dahlonega Court House also known as the Lumpkin County Courthouse (on topo map boxed in light blue) and Price Memorial Hall (on topo map boxed in royal blue). Originally a log courthouse, the brick replacement that stands today began construction in 1833 and was finished by 1836 (Howard, 1929; Historic Preservation Commission, 2005). Locally made bricks from Yahoola Valley Farm (one mile away) formerly owned by Colonel Baker, cover all exterior facades (Howard, 1929). Now located in the center of town at the intersection of two main thoroughfares, Main Street and Chestatee Street, the courthouse was the first public downtown building from which the public square grew. Today, the urban scheme of downtown Dahlonega is gridded. The urban grid model was developed through the Public Land Survey System (PLSS) beginning in 1785, and popularized by Thomas Jefferson before the turn of the century. Subsequently many American towns have adopted this practical schema as their fundamental systematized geometry of urban planning, as is the case with Dahlonega. 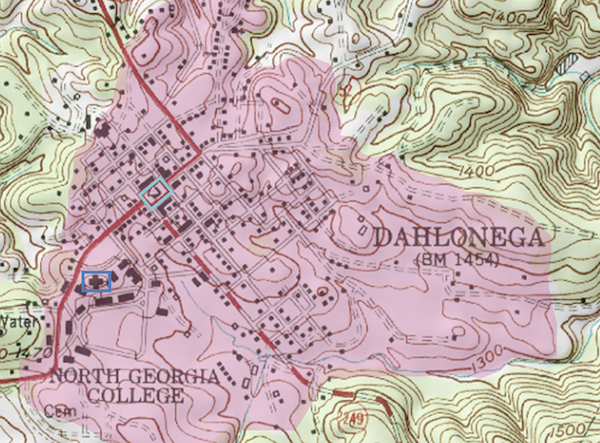 As one of the first public buildings, the courthouse was once the site of slave auctions, local protests, and theatricals (Howard, 1929). Its’ central communal location is a common development pattern in the southeastern United States. If you think about it, it makes sense… law is the keystone of civilization. It is perhaps the defining social characteristic that separates us from other primates, stemming from our highly evolved written language. Laws have to be written down in order to be implemented, otherwise they are not part of our collective consciousness. While laws and politics are controversial they are extremely important in maintaining the system of life we operate in. As such it only seems fitting that the Dahlonega Courthouse would be at the very center of living in the town and on the relative highest bedrock. Even if we look outside the United States, say to the Romans, the Vatican in particular, St. Peter’s Basilica is the central building occupying the space of a governing body. In Rome, by law the dome of St. Peters must be the tallest built structure in the city. So while not necessarily on the highest point of elevation in Rome, no building’s height stands taller than that of the dome of St. Peters. Countless other examples exist throughout architectural and urban development history that demonstrate this idea of buildings of authority corresponding with high topographical placements. This is because height is seen as an advantage in virtually all realms of aesthetics. Height equates to visibility and dominance over one’s surrounding. Placement of buildings in relation to their topography may often say even more about the unseen superstructures at play than things like architecture. Once a building is built on this dominant terrain, all other buildings are secondary. Architects have often compensated for secondary placement with ostentatious displays of wealth through architecture. An example of this is Price Memorial Hall.

Price Memorial Hall, on the outskirts of downtown Dahlonega is also on a high topographic point. While not on higher bedrock than the courthouse, the golden steeple surpasses it in materiality and overall landscape prominence. Coated with gold leafing from the surrounding hills, the steeple serves as a visual reminder of the late 19th century gold rush. While not part of the original design, the gold steeple was added later in 1972. The steeple is said to be the leafing of 13 ounces of gold (Noth, 1999). Today Price Hall is the administration building for the University of North Georgia, formerly North Georgia Agricultural College founded by Congressional Representative (1871) William Pierce Price (b.1835-d.1908). Price Hall is built on the foundation of the Civil War era United States Branch Mint, built in 1837. The mint was in operation until 1861 when it was seized by the Confederates.

Ten years later, in the early seventies the mint building and ten acres of surrounding land were transferred to the state as part of the Federal Land-Grant College initiative to be used as an agricultural school (Historic Preservation Commission, 2005). During this time of transition the building was remodeled in the collegiate victorian style. This effort was largely led and funded by Price. On December 19th, 1877 the building was subject to a devastating conflagration, in the year following it was reconstructed exactly as it was before the fire (Howard, 1929). Such buildings demonstrate the importance of site to human development. On January 20th, 1972 the building was added to the National Register of Historic Places.

Auraria is a present-day ghost town situated just south of the more well-known Dahlonega. Similar to Dahlonega, Auraria was a bustling gold mining town in its heyday, and was one of my towns that sprung up as a result of the Georgia Gold Rush of 1829 (Georgia Historical Commission, 1954). In 1832, Auraria was established as the county seat of Lumpkin County and boasted a tavern, hotel, and some small buildings to temporarily house the large influx of miners during the time. The demand for space was so high that a lottery, named the Georgia Gold Lottery of 1832, was held to distribute land, including land that was owned by Cherokee Indians. By May 1833, the population grew to be a tenth of the entire population in the county (10,000).

Half of the land just east of Auraria and noted on the historical marker of the town was purchased by then-Confederate Vice President John C. Calhoun. The Calhoun Mine was mined by slaves, which is unsurprising given the fact that Calhoun was a staunch defender of slavery.

More gold mines sprung up around the area, especially along the local creeks and rivers like the Etowah River and Camp Creek. The 40-acre gold lot that Auraria stood on was won by a man named John R. Plummer in the Georgia Gold Lottery. However, there were doubts regarding his qualifications for being able to participate in the lottery. Because many businesses and miners were pouring into the area, they chose to locate elsewhere for business due to Plummer’s legal debacle. Over time, the exodus of businesses northwards from the town took a permanent toll on the town which had no other economic means to boast besides gold mining. Having lost miners to more stable towns in the North, Auraria eventually lost its county seat to Dahlonega, and fell into deep decline.

Today, Auraria is a ghost town at the intersection of Castleberry Bridge Rd and Auraria Rd (also known as State Route 9E). All that stands today are a few homes, an abandoned hotel that is very unsafe to enter formerly called Graham’s Hotel, and Woody’s Convenience Store, which has many items still remaining in the store.

Stone, P. (2012). The demise of the Iapetus Ocean as recorded in the rocks of southern Scotland. Open University Geological Society Journal, 33(1), 29-36.