Noodle is loved in every culture around the world. Including the past and present days, noodle was evolved in different cultures in numerous ways. Especially in China and Italy, noodles serve as a staple food typically served on daily bases. Noodles are cooked in various ways to reflect the society that the noodle initially created.  For example, Dan Dan Noodles are the dish that represent the culture of Chengdu, China. The name Dan Dan Noodles comes from a word ‘dan,’ which means to carry on a shoulder pole. In the past, the street food merchant used to unload kitchen wear, chopsticks and boil from a shoulder pole to serve Dan Dan Noodles. The old citizens of Chengdu still remember the street vendors serving Dan Dan Noodles. Not only the noodle itself, but such street foods were a significant culture of Chengdu and China. Dan Dan Noodles was the central part of the street food culture. It is a nostalgic memory for the elders as well as the tasty traditions for people in Chengdu. Moreover, pasta is symbolic dish to Italians. The shapes and method of cooking was evolved with the history of Italy. The typical configuration of the noodle that first comes into the mind is a long thin stick-like shape. However, Italians developed various forms of pasta such as Anelli, a small ring-shaped pasta, rigatoni, a tube-shaped pasta, and orecchiette, a small ear-shaped pasta.  Such multiple developments of pasta show the affections and considerations of Italians towards pasta. Pasta is not only loved by Italians but also esteemed by the people from every part of the world. Pasta became an ordinary daily meal in the United States. Also, in Korea, traditional Italian is served as well as the Korean fusion pasta.

The noodles represent the traditions and meaning of life.  It is also commonly served in celebratory events. In Chinese culture, noodles are the symbol of longevity because of its typical long thin shape. Therefore, in China, there is a noodle called Long Life Noodles. This noodle is prepared on birthdays and many other celebratory events. There is a myth in China that one will live as long as the length of the noodle that is served. The noodles are strongly associated with the cultures and customs because noodles had a long history and were always around people.

Moreover, noodles reflect the lifestyle of the society. The current society desires for a healthy lifestyle and nutritious food, and pasta is one of the food that the people aspire. Though people try to avoid carbohydrates, our body still requires healthy carbohydrates.  Pasta contains nutritious carbohydrates.  Also, pasta is usually served with vegetables, meats, or seafood, which makes the meal even more nourishing. With only one plate of pasta, people can obtain balanced protein, carbohydrates, and fat which is crucial nutrition to operate one’s body. Pasta is indeed can be considered as one of the superfoods.

Defining noodles including different aspects of every culture is hard. However, personally, noodles are a staple food cooked with various methods, usually boiled or fired, that represents the culture and traditions of societies. Every noodle is different in shape, texture, and taste. It is typically served with soup or sauce and made with wheat, egg, water, or flour. It also reflects the lifestyle and history of a culture. Especially as a Korean, noodle also has special meaning to me because of the Korean traditional Cold Noodle served in the recent successful inter-Korean summit. After two leaders of North and South Korea sharing Cold Noodle, it became a new symbol of peace to Koreans because the most recent inter-Korean summit resulted in promise for the peace in the Korean peninsula. 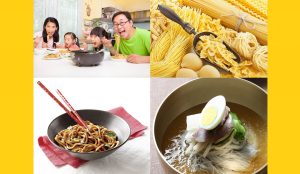 One Reply to “Noodles, cultures, and traditions_Jeeyoung Kim”