The noodle is a food with profound history, which can be traced to Han Dynasty in China and 13thcentury in Italy. The noodle is always viewed as a staple food and is made from durum wheat semolina or from the flour of certain other rains, mixed with water and eggs to make a dough. The dough is then kneaded and formed into various shapes; thus, the shape of the noodle in either China or Italy is not only limited to a thin string.

Noodles in different regions can reflect the local culture, especially in China. China is such a huge country and consists of 56 ethnic groups. With such geographical and ethical variations, it is not surprising for China to have significantly different culture and cooking styles across the country. Noodles, therefore, as a staple food all across the country, can best represent culture where it comes. Noodles from different regions in China have very different cooking styles, contingent on the local cuisine. The noodles from a certain region is not only unique in its taste, but also carries the local trait. For example, Dandan noodles (担担面) is the local noodle dish from Sichuan Province. It is spicy, embracing the local cooking style in Sichuan Province. The name also represents the local culture. It comes from the fact that Dandan noodles was sold along the street by people carrying burdens on their shoulders. In the ancient time, businessmen in Sichuan Province carried burdens with them all along the street to sell their products. People who sell Dandan noodles put ingredients for the noodle, sauce and stove in their burdens. Once anyone come to them, they can immediately cook Dandan noodles and it only takes a little bit of time. In a word, Dandan noodles reflect the local cuisine, culture and unique life style. From my perspective, the noodle can reflect the culture and regions through its cooking style and even its name or shape. Since noodles embrace the culture and have unique tastes in different regions, it means the taste of home and a linkage to home to Chinese and Italian people. When people eat noodles that are unique to their hometown, they will have a feeling of staying at home and noodles can relieve their homesick. Thus, noodles play a significant role in the food culture. In my opinion, the reason why noodles play such an integral role is that noodles are the staple and most common food in China and Italy. Compared to other dishes, noodles are easier to cook, and it is really convenient to make noodles at home. Therefore, people have noodles very often and can have it everywhere, and they easily integrate local culture into noodles. As a result, the ubiquitous trait of noodles bestows it a documentary function to reflect the local culture and later function as a linkage to the hometown.

Noodles have various shapes and can be cooked in various ways. Therefore, it is really hard to come up a comprehensive definition of the noodle. If I were to create a definition of the noodle, I will define the noodle as a type of food easy to make and can be consumed immediately or stored for later consumption. It can be made from wheat semolina or from the flour of other rains, mixed with water and eggs to make a dough. The dough, then, is shaped into whatever shape people intend to make, and cooked with certain recipe. The ways of cooking noodles vary depending on the local cuisine. The noodle is so complicated that it is really hard to define in words but the noodle can be described in its very basic traits. In my opinion, the real noodle is any food made from the mixture of flour and water. It can be any shape and cooked in any way. 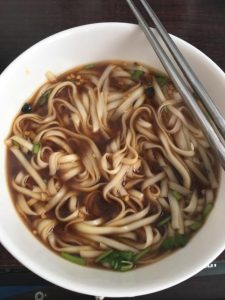 One Reply to “The Identity of The Noodle (Qiulun Li)”