The noodles we ate today really reflect one’s regions, culture, cities and people who cooked them. Firstly, for culture and history, the noodles and pastas all originally made from the same material-wheat, but different countries process them differently. For example, Chinese people generally make them as a thin and long noodle. However, for Italian people, they make them into various shapes, including small rings noodles, spaghettis, etc. And as I observed, different shapes of pasta are served with different sauces and in different dishes. For example, Acini di Pepe, the “peppercorn,” are usually found in soups, while Campanelle, the little bell pastas are generally found in salads. This makes me think why Chinese people generally just have one kind of long, thin noodle, while Italians have so many different kinds of pastas. I guess culture plays an important role behind this difference. Looking through Italian history, we can see that Italy was once occupied by different countries including Germans and France. It did not become one country until 1861. Therefore, Italy has a diversity of foods because of the foreign influences. The diversity can be reflected from the shape of the pasta. Secondly, the noodles really reflect one’s regions and cities. For Chinese noodles, there are a variety of ways of cooking noodles and even different cities have their own way of cooking noodles. For example, Sichuan province has Dandan Noodles（担担面）, in which a spicy sauce containing preserved vegetables, chili oil, Sichuan pepper, minced pork, and scallions served over noodles. This kind of noodles really reflect the Sichuan’s cooking characteristics, which is spicy. Since Sichuan is situated in the middle of China and is humid at all times, therefore, people combine lots of pepper into their cuisines to drive away the humidity. So Dandan Noodles can reflect a region’s eating and cooking style. Moreover, not only Dandan Noodles can show Sichuan people’s preference for spicy food, the noodles in East China can also represent Jiangnan people’s preference for umami and mild taste. For example, in Shanghai, there is Shanghai noodle in superior soup(上海阳春面)，in which there aren’t much meat and is simply consists of scallions and pig oil. From the ingredients of Shanghai noodle, we can see that in East China, most people don’t eat a lot spicy or really salty food. Most commonly, people like to savor the original taste of certain food. So from Dandan noodles and Shanghai noodle in superior soup, we can definitely see the reflection of a region’s taste preference for food. Thirdly, noodles can also reflect the people who cook them. For example, Italians and Chinese people cook noodles in totally different ways. For Italian people, the reading mentions that the discovery of tomato with pasta is a milestone for pasta. Therefore, lots of Italian people cook pasta with tomato sauce and sometimes add some shredded meat into the sauce. However for Chinese people, we like to add beef, vegetables or even seafood into the noodles with clear soup made from water, salt and scallions. So the noodles can reflect who cook them too.

I think noodles means a lot to both Chinese and Italian people. The history of noodles in both China and Italy can be traced back to thousands of years before. In China, the noodle itself represents lots of meaning to people. For example, when there is a person’s birthday, he/she will have longevity noodles(长寿面). When people move into a new house, they will have noodles with gravy (打卤面), which means flavored life. On the day of lunar February 2 “dragonhead”, people eat dragon whiskers noodles(龙须面) to look forward to good weather. We eat different noodles in different seasons and different festivals. In Italy, too, people eat different noodles at different occasions. Therefore, noodles became not just noodles, but also a way to give people best wishes and a representation of a country’s culture. It integrates the regional characteristics of food, the food history of a country and the best wishes to people. Therefore, I want to define noodles as a dough typically made with egg and usually eaten with a sauce or in a soup that comes with a diverse shape and meaning behind them, reflecting a region’s cooking characteristics, culture and eating history.

In my opinion, this image can represent noodle’s diversity and cultural background very well. We can see from the picture, noodles can either be eaten with soup or simply mix them with sauce and eat them as cold noodles(冷面). Also, it can be cooked with various ingredients, including pepper, vegetables, meats etc. Thus, noodles can be eaten in many ways depending on where you come from and what ingredients you have. And those different noodles all have different nutritious value behind them as well as different meaning and history. 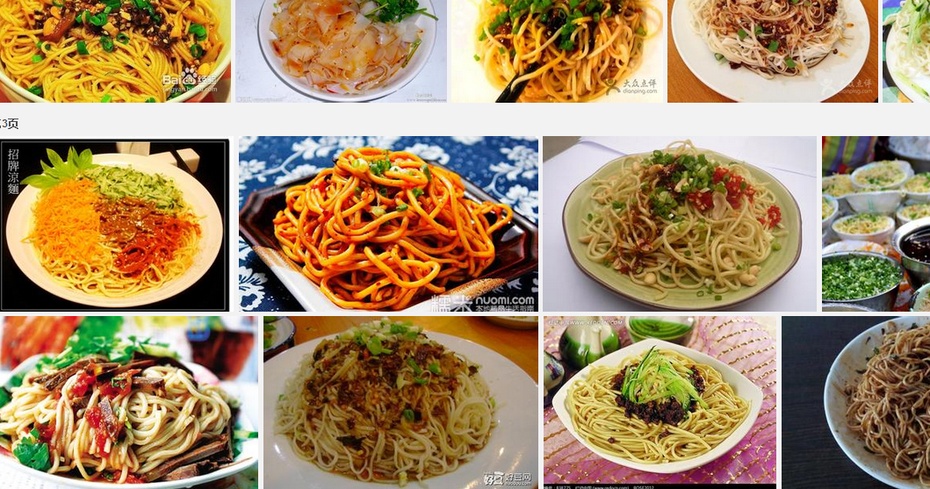 One Reply to “Noodles in China and Italy”