Over time, noodles have gone from being a mere food item to being a representation of one’s culture and background. One can learn so much from a culture just by analyzing the type of noodles that is eaten in that culture. You will be able to learn about the most notable influences in a culture, how the geographical region has shaped the culture and how people in the culture express themselves and view one another. Noodles can help someone understand a brief history of the culture.

Noodles can showcase the different societies that have influenced the specific regions in which the noodles are present. Many people in Italian societies believe that noodles were first introduced to Italy by Marco Polo from one of his voyages to China. However, this is not the case. Noodles had already been introducing to Italy by the Etruscan and Romans who enjoyed a noodle type dish also made from durum wheat but was oven baked not boiled. This is a very important important showcase of how another culture affects a society because the Etruscan-Roman noodles has spanned the centuries and remained an integral part of the culture  even though the recipe is not the same. This shows how deep and widespread the Etruscan-Roman influence has been to Italy because many other cultures have influenced and introduced Italy to many different cuisines, however, noodles has been the one to stand the test of time and become an important aspect of modern day Italy. The belief by many Italians that noodle had been introduced to Italy by China also shows how important Chinese influences were to this region. The Silk Road allowed many goods to be imported  to  Italy, like silk , which allowed Italy to become one of the most important centers for manufacturing silk, with Genoa, Venice and Florence as the main production areas creating a booming economy, so it’s not so far-fetched to believe that an important cuisine in Italian culture was due to China and brought to the region by the Silk Road as many other items had been. Another evidence of another culture influencing Italian society through noodles is the fact that pasta didn’t become a staple in this Italy especially the southern region like Sicily until the Arabs became a presence in this region. This early pasta introduced by the Arabs was a staple in Sicily and spread throughout Italy’s mainland due to durum wheat being a great produce for Italy’s climate. Evidence of the Arabs extensive mark on Sicilian society can be viewed through their regional pasta recipes which still include middle eastern ingredients such as cinnamon and raisins.

Noodles also serve as a way to pass tradition down through generations in order to maintain certain aspects of identity and culture.  Noodle traditions serve as a way to connect with those who came before us, as well as  promoting a long and fruitful lives while also celebrating loved ones. A custom in China is for people to eat longevity noodles during birthdays as a way of attaining long life and prosperity. This tradition allows for everyone involved to be able to attain long life while celebrating the birthday honoree. Another custom is for people at the time of marriage moving into their new home to eat noodles with gravy symbolizing a flavored life. Another Chinese custom pertaining to noodles is eating dragon whisker noodles on the day of lunar February 2nd to look forward to good weather. An Italian tradition that is still implemented today and is the way a meal is structured. A traditional Italian dinner contains five courses including the antipasto, the primo, the secondo, the cortono and the dolce. Noodles are usually enjoyed during the primo and served as an appetizer and not the main event. These traditions showcase the role noodles play in our day to day lives.

Noodles are also a way for one to express their affection and show how much they care without using words. This is because the art of making noodles is labor intensive and requires a commitment takes great care so one must really enjoy making this dish and have great love for the recipient of the dish to make it. An example of this can be seen through the different type of noodle dishes and the stories behind them. From seafood noodles, also known as dutiful son noodles, to vinegar pepper old friend noodles. Both stories for these two noodle dishes got their name from an act of kindness and loves displayed to loved one. Dutiful son noodles received this name due to a noble son taking care of hid ill mother by making her noodles in a soup filled with multiple sources of protein including seafood and eventually leading to the mother making a full recovery. Old friend noodles also received its name from a similar story. There was a teahouse owner who had a customer who come in every day for tea. However, the regular customer stopped coming in for a few days, so the teahouse owner went to check on his old friend and found him to be ill. He made a bowl of vinegar pepper noodles soup for his friend and his friend soon recovered. These stories all show the power of love and care that people have for one another and express through noodles.

Noodles represent a huge portion of Chinese and Italian societies. Noodles gives Chinese and Italian people a sense of pride and a stronger sense of identity. This is because every region in both countries has their own definition of the noodle and distinct noodle dishes that has been passed down from generations and represents family traditions. In China, Shanghai has Shanghai noodles in superior soup, Nanjing has small boiled noodles and Hangzhou has Hangzhou Pain Er Chuan noodles which is noodles with preserved vegetable, sliced Pork, and bamboo shoots. These dishes are associated with specific cities and the people that live there. The way noodles are shaped also helps develop a sense of identity and regional pride. There are a multitude of pasta shapes that can be tied to specific regions n Italy even though they have spread worldwide. The region of Campania in southern Italy is known for penne, Chiara is a pasta that is most typical of Abruzzo in central Italy and trofie is a staple of Liguria in North Italy. These distinctions between the noodle also allow people to have a stronger sense of family and interpersonal relationships because these cuisines are usually the staple dishes of a region which forms a closer bond between families and brings about a sense of togetherness

I believe that noodles play such an integral role in the culture in Italy and china because of its accessibility and the traditions that have been fused around the noodle. Noodles became an integral part of society, I believe due to its basic ingredient-flour. Flour as previously mentioned in this blog is extremely abundant in Italy due to its climate and extremely abundant in China with it being the biggest grain producer and consumer in the world. The easy accessibility to flour is how the noodle began to weave its way into people’s live. However, the ingredients are not what make noodles such an important part of people’s lives. It is the way that over time it has become a part of every aspect of one’s life-from one’s identity, to traditions to being used as a tool to convey emotions. Examples of noodles being a part of one’s life as previously mentioned in the blog are different regions with different noodle dishes and noodle forms that foster a sense of community and self, traditions like eating longevity noodles that lead to long and prosperous life and showing someone, you care for them by making them a bowl of soup like the dutiful son soup.

All this leads me to my definition of the noodle. I would define noodles as a food item that transcends time and has influenced and connected every part of the world while still managing to allow us to maintain a sense of self and community. This I believe is the true definition of the noodle and has details that the previous definitions we read in class didn’t because they focused on one dimensional analysis of the noodle not realizing that the noodle was much much more bigger and meant more than just what’s in it. 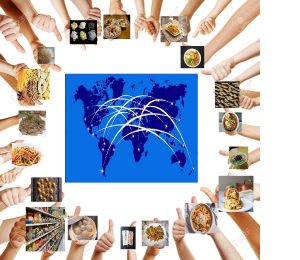 One Reply to “The Journey to Defining the Noodle”