Yujing Wang
Through this week’s reading, we ventured down a culinary journey into Chinese and Italian regions, learning the unique pasta recipes of their customs. I’m convinced that noodles of a specific region have become more than a beacon which attracts tourists, but they consummate both the geographical character and history (including industrial evolution, folklore and the people’s anticipation of everyday life). In short, though one may see noodles as the most common cuisine, its cultural significance goes far beyond a cheap but nutritious product.
The methods of cooking noodles reflect more than the present tasting predilection of a certain region but gives us an irreplaceable insight on its people’s identity. We’ve read about Dan-dan noodles of Sichuan, Crossing-the-bridge noodles of Yunnan, Bamboo-pole noodles of Guangdong, macaroni of the Naples, even instant noodles that prevail around the world and countless kinds of noodles that serve as a symbol of their birthplace. Some of the articles focus on the author’s encounter with the food, others emphasize the intriguing stories behind the dish. In Dunlop’s passage introducing his experience in Chengdu, he mentions the origins of a variety of “small eats”, such as “Zhong boiled dumplings” and “Lai rice balls”, all named after the cook who had invented them, these later popular street foods are no doubt leaving their mark in Chengdu’s culinary history, and with them the pride of common workmen who have dedicated their lives to make food that please their customers. The tale behind “Crossing-the-bridge rice noodles” may be a folklore to give the recipe a legendary touch, but it nevertheless engraves the toils of ancient Chinese scholars and the pressure they face when attending the Imperial exam. On the other hand, the macaroni of Naples was a product of industrial evolution, it signified the ending of an era of hunger and poverty, as a luxurious commodity became affordable to common households. I could only imagine the joy of Neapolitans when cheap macaroni first emerged in the markets. Noodles certainly do not speak, but they easily answer where they come from and what they’ve been through. From the readings, despite the writer’s identity as a foreigner or a native, they seem to have no trouble acquiring the recipe of the pasta and therefore were able to share it in their published work, and the notion of these regional customized food taking the role of bridges between nations thrill me. Nowadays, one may not have to be in a region to know about it, and the easiest way is by tasting its cuisine and learning the story behind the food.
Noodles in Chinese culture “is not only a source of human nutrition, it also plays many roles in the aspects of religion, economy and etc.” (Na Zhang, Noodles, traditionally and today, 1) Chinese “cakes” that later evolved into the thin noodles that we are familiar today have been an efficient way of transforming wheat into both healthy and tasty aliment Chinese labels their nation as the realm of ritual, many ceremonies from ancient times can’t proceed without the proper food. Noodles also dutifully played their part in such a society, different kinds of noodles where served on diverse occasions, some for a wish of good health and longevity, others which symbol friendship and filial piety. Although in modern times people tend to neglect these meanings and consume noodles due to fondness of the taste father than the significance, the stories behind this staple food most certainly responds to the core values of Chinese culture. Noodles in China remind the people of who they are and what they treasure.
Pasta of Italy, on the other hand, records the country’s social and economical progress, as Italy herself, like China, has many regions and was united into a sovereign nation in the 1800s. Pasta is a reminder of the nation’s glorious history, back in the Roman era when she conquered Europe and certain regions of Africa and Asia, and therefore different kinds of Italian Pasta bear names that are introduced to the nation from foreign cultures. The popularization of Italian pasta was also closely connected to the nation’s industrial and economic developments “Homemade pasta moved early from family kitchens into the workshops of the mills.” (Vita, Encyclopedia of Pasta, 7) Where machines where invented to accelerate the production process, making pasta affordable to commoners.
As my blog’s title indicate I would describe noodles as a song that one doesn’t need to understand the lyrics. The taste of food, similar to the rhythm of songs, is a universal language shared and enjoyed by people in every corner of the world. Noodles narrate the struggles of people and emphasizes on the value they hold important. I would define noodles as a cultural bridge, connecting more than regions oceans away, but also the past to present. I would use a painting of Mondrian to represent noodles; although they share simple compositions, they possess a complicated and connected nature. 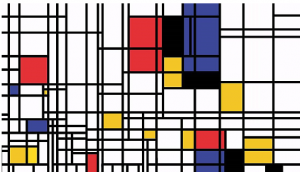 One Reply to “Noodles: A Song Praising Life and History”